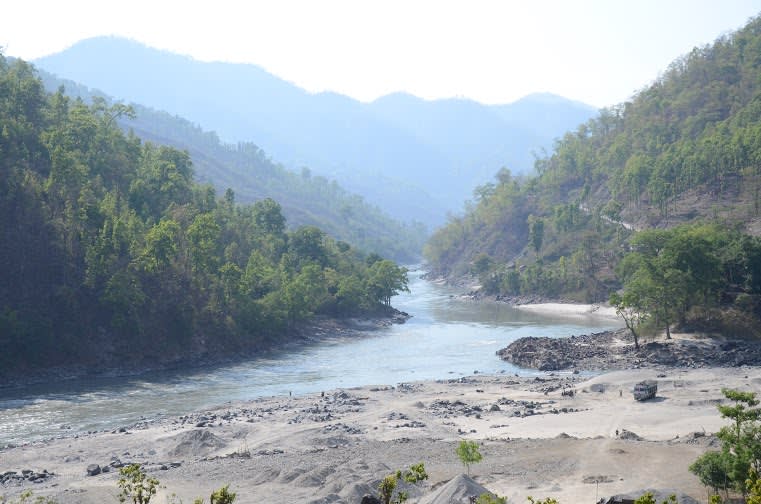 KATMANDU -- When Nepal built its first hydropower plant in 1911, it was among the first Asian countries to do so. The 500kW plant was funded by the British and named Chandra Jyoti, after the then prime minister. It was meant to light the palaces of the Ranas, the hereditary rulers until 1951.

In the decades since, efforts to harness Nepal's abundant water resources stalled. Estimates of how much hydropower the country is capable of producing vary wildly, but many experts say it can feasibly generate about 42,000 megawatts per annum.

Today, it has a measly capacity of 712MW, which covers only half of the country's needs. There are daily power outages of up to 18 hours in the winter, when rivers are low and the country has to import electricity from India.

But things may soon change for the better. Nepal is going to build two major hydropower plants with $2.4 billion in Indian funding including $1 billion from the country's state-owned power company Satluj Jal Vidyut Nigam. On Nov. 25, Indian and Nepalese officials signed an agreement to develop the 900MW Arun III hydroelectricity plant in northeastern Nepal. India's Prime Minister Narendra Modi, who in early August became the first Indian leader to visit the country in 17 years, was in Katmandu to witness the signing. In September, a similar deal was signed for India's GMR group to build a 900MW, $1.4 billion plant in Upper Karnali, making it Nepal's largest ever foreign direct investment. GMR is likely to confirm early next year its investment in the 600MW Upper Marsyangdi plant.

Nepal's prime minister told delegates at a recent infrastructure summit that the two deals "opened the doors for private and foreign investment in Nepal ... The market for energy is not only Nepal and India, but the entire South Asian region."

Modi's visits to Nepal and the signing of the hydroelectric deals show how the relationship between the two countries is warming. The Indian investment also brings hope to many Nepalese that the country will finally see its economy take off.

Over 16,000 people were killed in Nepal's decade-long Maoist insurgency, which ended in 2006. The internecine war seriously damaged the country's infrastructure and ruined the country's economy, which wouldn't have survived without remittances sent by Nepal's one million migrant workers who toil in the Middle East and Southeast Asia. Even today, about 1,000 people leave the country every day to find work abroad, depriving Nepal of its dynamic youth. Since the inception of the peace plan in 2007, the country's efforts at recovery have been hamstrung by political instability: There have been seven governments in Katmandu in as many years. On top of that, the idea of selling hydropower to India is a contentious one. Nepal has frequently accused India of interfering in its internal affairs over the years, taking advantage of the fact that it controls essential supplies to the landlocked mountainous country. Political parties on the left also cite previous water sharing treaties with India as proof that any similar agreements would likely be "unequal" and that Nepal would be "cheated."

Under Prime Minister Sushil Koirala, who was elected last year, the government has pushed aside these objections and is ready to take advantage of the growing energy needs of its large neighbor.

On Oct. 21, the two countries signed the Power Trade Agreement, a bilateral mechanism for trading power that will help Nepal narrow its $12 million-a-day trade deficit with India.

"It has the potential to alter the status of Nepal. If we can reap benefits from hydropower, we can accelerate the transformation of our country. We can move from being poor and head toward prosperity," said Govind Raj Pokharel, vice chairman of the National Planning Commission. "We spent decades discussing whether Nepal's hydropower is for export or for local consumption. These new deals would give us an opportunity to test the notions," he added.

The India-funded projects are under a "build, own, operate and transfer" (BOOT) contract. Nepal gets an equity stake in the Upper Karnali plant and access to 12% of the electricity output for free. Ownership of the plant will be transferred to Nepal after 25 years. For Arun III, Nepal will get 21.9% of the electricity for free but no equity. That plant will also be handed to Nepal after 25 years.

If all had gone according to plan, China, Nepal's other giant neighbor, would have pre-empted India in a bid to develop Nepal's hydroelectricity. In 2012, Nepal signed a deal with China to develop the 750 MW West Seti, a $2.5 billion project in the country's northwestern region. The deal has yet to be confirmed mainly because it is meant only to supply power to Nepal's domestic market and it is unclear whether there will be sufficient demand by 2020, the projected completion date.

"We have completed two rounds of negotiation with China International Water and Electric (CWE), a subsidiary of China Three Gorges Corp. We hope the negotiation will soon come to a conclusion," said Radhesh Pant, CEO of Investment Board Nepal, a government agency set up in 2011 to fast-track large infrastructure projects.

The reputation of the Chinese company has been damaged since it was barred in September from participating in any World Bank project for three years. The World Bank said it found out that CWE "misrepresented its experience during the procurement process" in hydroelectric projects in Africa and Southeast Asia.

Khadga Bahadur Bisht, president of Independent Power Producers' Association of Nepal, said the country would happily work with both neighbors to develop its hydropower resources. He said India wants to buy electricity from Nepal, and China simply wants to invest in new plants since the country cannot import power the same way because of difficult topography.

Modi's pro-development government may have helped nudge Nepal toward cashing in on its vast hydropower potential. "Modi's visit did provide the spark that paved the way for the signing of the [hydropower development agreements]," said Pant. Nepal has also decided to build dozens of small plants on its own, according to the Nepal Electricity Authority, which will provide around 2,000MW when they are all online.

"If you look at India's growth projections, it needs to add up to 25,000MW of power supply every year. India is under pressure to reduce carbon footprints. The emphasis is on renewable energy. It is a small investment for them, but a huge investment for us," Bisht said.