The broadband explosion is reshaping the telecom sector and changing lives Armed with smartphones, tablets and a bicycle, Poonam Chauhan teaches women in the Indian village of Batesara how to use the internet. (Photo by Ken Kobayashi)
KEN KOYANAGI, Editor-at-large, Nikkei Asian ReviewJune 8, 2017 10:00 JST | India
CopyCopied

India's embrace of the mobile internet has been massive and swift.

Broadband use is skyrocketing as telecom carriers and handset makers offer customers deals too sweet to ignore. In the country's rural reaches, unprecedented access to data is changing lives.

The whirlwind of disruption is creating fresh opportunities for investors and individuals alike. 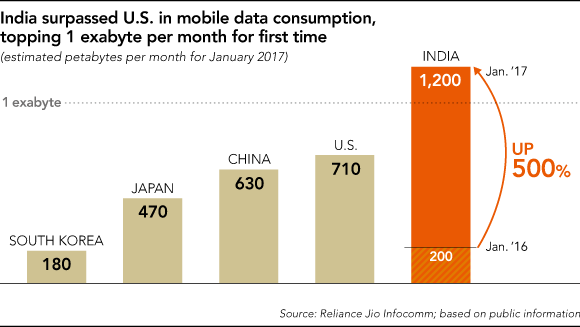 MUMBAI In early April in Batesara, a village some 160km south of the Indian capital of New Delhi, 53-year-old Maya Devi happily explained how her family decided to install a toilet in their house two months earlier.

"We made up our mind only after we found out on the internet that the government would give back a large part of the money spent on building a toilet," Devi said. Her family spent about 15,000 rupees ($233) on the project, of which 12,000 rupees was reimbursed by the government within 45 days, she said.

This was a big deal. The village of about 1,200 residents had never had a toilet until January; when nature called, everyone -- including women and children -- simply went in the open.

The seed was planted when Devi read about the government subsidy on a smartphone brought to Batesara by fellow villager Poonam Chauhan, who had joined a Google-supported nonprofit program to promote mobile internet literacy. Chauhan, a 24-year-old mother of two, hosted gatherings where female villagers could access information about the outside world on a smartphone and a tablet with mobile broadband connections.

Devi was not the only one inspired to invest in plumbing; the village had at least 30 toilets as of early April. 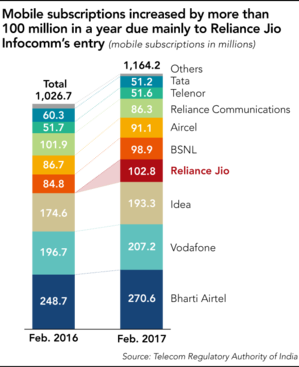 A 2016 government study showed that only 45% of rural households had access to toilets, compared with 89% in cities. But even in urban areas, most of those living in slums do not have toilets. The government of Prime Minister Narendra Modi has launched a "Clean India" initiative aimed at eliminating this problem by 2019.

Modi's subsidies for the rural poor go beyond toilets, with the government also splashing out for education, medical treatment and even weddings.

But as Devi's example shows, these programs only work if people know they exist. That is why greater internet penetration, in addition to basic literacy, is crucial to helping the poor. According to a joint study published in March by the Internet and Mobile Association of India and research company Kantar IMRB, the internet penetration rate among India's roughly 920 million rural residents was estimated at only 17% as of October 2016, compared with 59% among the 400 million urban residents.

That imbalance may not last long, however. Internet usage is expanding at an annual clip of over 20% among the rural population, compared with single-digit growth in cities. At the same time, the ongoing massive disruption in the country's mobile telecom industry is accelerating a virtuous cycle of internet penetration and penetration of policy measures.

MOBILE BROADBAND FOR ALL India's internet population is growing at an ever-faster rate. According to the joint study, annual growth was pegged at about 12% for the year through October 2016. Since summer 2016, the pace has picked up to about 15%. The survey estimates that India will have more than 450 million connected citizens by the end of June. 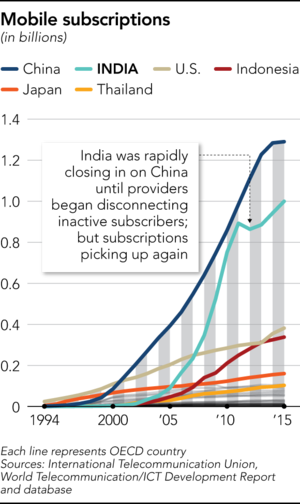 Most Indians access the internet via mobile devices. And it is the mushrooming use of mobile broadband -- high-speed third-generation and 4G networks -- that is speeding up the penetration rate.

That broadband explosion was ignited last September by conglomerate Reliance Industries, whose tycoon chairman, Mukesh Ambani, had decided to enter the market in 2010 after dissolving a non-compete agreement with his brother, who heads rival mobile carrier Reliance Communications. The scrapping the non-compete agreement allowed both groups to enter each other's business fields.

Ambani declared that the mission of his new 4G service, offered under the Jio brand, is to provide "broadband for every Indian" -- which is exactly what Modi said when announcing the targets of his "Digital India" initiative in July 2015.

Ambani's new mobile service unit, Reliance Jio Infocomm, is rapidly delivering results. As many as 100 million people had signed up for Jio SIM cards as of February, just six months after the service was launched, according to the Telecom Regulatory Authority of India. Jio sources said the number topped 110 million as of the end of April. Reliance Jio Infocomm leads the Indian market, with around 100 million subscribers as of February. (Photo by Ken Kobayashi)

Over those same six months through February, the number of Indian broadband subscribers jumped by 52% to 261 million. Jio now accounts for a leading 39% of all broadband subscribers. Bharti Airtel, the country's largest mobile telecom carrier, is a distant second at 18%.

Jio's network already covers more than 80% of the country's population, and the company wants to expand that figure to 98-99% by the end of 2017, according to sources at Jio.

JIO SHOCK Behind Jio's explosive growth is a bold pricing strategy -- or rather, a lack of pricing. The company offered new subscribers free voice and data services through the start of 2017, but extended the campaign through March.

From April, Jio began charging data fees for as little as 309 rupees for 1 GB per day for three months. Between 80% and 90% of Jio's initial customers have since become paying subscribers, according to company sources. But voice services remain completely free, and data plans are priced far lower than what rivals had been charging. Suddenly, Bharti, Vodafone India and other mobile operators were drawn into a fierce price war that gobbled up much of their profits.

At Bharti, for example, net profit attributable to shareholders for the quarter through March tumbled 72% on the year to 3.7 billion rupees, while quarterly revenue shrank 12%. Gopal Vittal, chief executive for Bharti's India and South Asia businesses, blamed the declines on "predatory pricing by the new operator" in the earnings press release. He pointed out that India's telecom industry as a whole witnessed its first revenue drop on a full year basis.

Also hurting is Reliance Communications, headed by Ambani's younger brother. The company on May 27 reported a group net loss of 9.66 billion rupees for the quarter ended March, a sharp reversal from the 900 million rupee profit a year earlier. Revenue, meanwhile, shrank 24% to 43.12 billion rupees. The damage was not limited to earnings: The company lost 3 million customers over the three months.

To cope with the damage and its mounting debt, Reliance Communications has decided to sell a stake in its cellphone tower business and merge its wireless operations with those of rival Aircel.

Feeling the pinch as well are Vodafone and Idea Cellular, which have agreed to merge by 2018 to create India's largest mobile carrier.

Bharti is also looking for safety in numbers, agreeing to acquire the India business of Telenor, a Norwegian multinational carrier.

With over 10 players exchanging elbows for little or no profit, Jio's entry is bound to accelerate industry consolidation.

But disruption can also create new -- and in this case potentially lucrative -- opportunities.

India's mobile internet users have suddenly begun consuming far more data per month than anyone else in the world, including Americans and Chinese. Jio, a brand that did not even exist until last summer, alone handles 1 exabyte -- a billion gigabytes -- of data every month. To put that in perspective, the total figure for India is 1.2 exabytes, almost double that of China.

The secret to that data leapfrogging? Video. 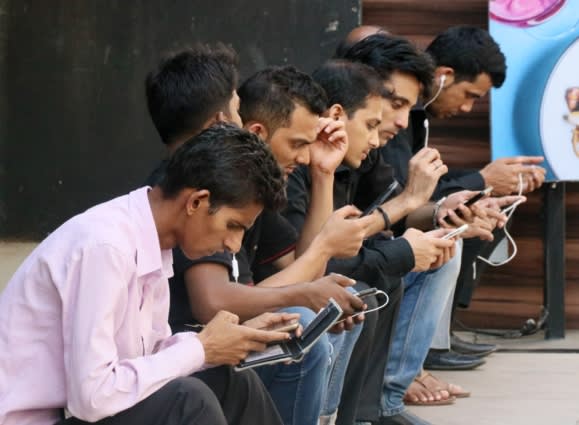 Smartphone users in Mumbai: It is estimated that India will have 450 million connected citizens by the end of June. (Photo by Ken Kobayashi)

The country's top video streaming service, Mumbai-based Hotstar, streamed 297 million hours of video in April alone. That is 4.8 times more than it streamed in August 2016, right before Jio was launched. Its users shot up from 33 million in August 2016 to 70 million in April.

Ajit Mohan, chief executive of Hotstar, a 21th Century Fox group company, said the availability of affordable high-speed mobile data services will inevitably prompt smartphone users to use data. In other words, there are growing opportunities for other data-heavy services in India.

As the number of mobile broadband users grows, so too does the use of e-commerce services offered by local startups such as Flipkart and Snapdeal. The Modi government turbocharged the spread of mobile payment services by taking high-denomination bank notes out of circulation in November. The mobile boom is accelerating investment in online startups and handset manufacturing plants by companies and investors both inside and outside India.

The opportunities are also there for individuals in the form of not just better careers, but better lives in general.

In 2014, documentary filmmaker Nawneet Ranjan started a project aimed at empowering people living in Mumbai's slums by teaching them mobile app programing. The undertaking saw four teenage girls create an app to promote women's safety. Called "Women Fight Back," the app is packed with such features as an emergency call function and a distress alarm. It has been downloaded more than 500 times on the Google app store since its release a few months ago.

One of the developers, Ansuja, 16, said the project "has not only been helpful to the community but it also gives me confidence for bigger things in life." The experience could mean the difference between a life as a software engineer and a scavenger in the slums.

DIGITAL ECONOMY Ravi Shankar Prasad, the minister for electronics and information technology, welcomes the intense competition that is shaking up India Inc. He told the Nikkei Asian Review that India's digital economy -- including online services, IT services, electronic manufacturing, communications and medical electronics -- will swell to $1 trillion within three to four years.

The GSMA, an international mobile industry group, predicted last October that the number of unique mobile subscribers in India will grow 6% a year to 951 million in 2020, and that 670 million of that number will have broadband connections. But after the "Jio shock," those projections are likely to fall far short of the actual numbers.

As bold as Modi's Digital India initiative was at its inception, the changes are shaping up to be far bigger and faster than he envisioned.