TOKYO -- India's new government under Prime Minister Narendra Modi is off to a smooth start in its first month in power. It has given clear statements on foreign and domestic policies and on economic reform plans.

Expectations for the government have been high among the public and economy watchers. The Bombay Stock Exchange Sensex market index has risen more than 5% since Modi's election victory in late May. Automobile sales volume is showing signs of a comeback as consumer confidence grows. The world is watching with hope, despite some causes for anxiety, including the threats of inflation and rising oil prices.

When Modi entered the parliament building for the first time as a member of the legislative body on May 20, he knelt and pressed his head against the foot of the stairs as a show of respect. In his subsequent address to parliamentary members of his party, he shed tears, softening his grim strongman image. His reputation has been as a determined leader, a party infighter who wins those fights. This was the moment that marked the transformation of his image into that of a politician loved by the people.

"Without your support, my mandate is incomplete. So I will seek your support and guidance as we proceed," Modi said on June 11 in a speech addressed to the opposition in the upper house.

Even though his Bharatiya Janata Party (BJP) and allies secured a comfortable majority in the parliament, "I don't want to move ahead on the basis of numbers, but on the basis of collectivity," he said.

In his cabinet meeting on May 29, Modi announced a 10-point action plan for the entire government, including orders to "welcome innovative ideas and give more freedom to bureaucrats" and "policies to be implemented in a timely manner." He asked each minister to submit a 100-day agenda of priorities for his or her ministry.

On June 4, Modi summoned about 80 secretaries and high-ranking bureaucrats from all government divisions to his office and gave them a three-hour lecture. He asked them to eliminate red tape and institute policies based on innovative ideas without fear of failure. He even encouraged them to jump the chain of command and speak with him directly if necessary.

A. Didar Singh, secretary-general of the Federation of Indian Chambers of Commerce and Industry and a former Indian Administrative Service officer, said these were the first-ever direct instructions from an Indian prime minister to top bureaucrats. Singh added that Modi looks set to repeat at the federal level his model for success in the state of Gujarat, namely by building good relations with the bureaucracy.

Modi is thoroughly prepared, having hand-picked people who worked with him in the Gujarat government for posts in the prime minister's office. His method of managing bureaucrats, by giving them a free hand and building their morale, is quite different from that of his predecessor.

In foreign relations, Modi's first action as prime minister was to invite Pakistani Prime Minister Nawaz Sharif to his inauguration, despite continued military tension over border issues and other concerns between their nations. On May 27, the day after the inauguration, Modi met with Sharif. Afterward, Sharif said he is "working with Mr. Modi in harmony to resolve all unsettled matters."

In early-June, Modi met with Chinese Foreign Minister Wang Yi. In addition to discussing trade and investment issues, the two confirmed plans to mutually resolve border conflicts, which have long cast a shadow over relations. At the BRICS summit scheduled for July in Brazil, Modi plans to talk with Chinese President Xi Jinping.

Although Indian politicians and bureaucrats have been mum on the question, India's top foreign-relations priority is the U.S. Relations between the nations have been strained lately due to the passage in India of the nuclear liability act, which makes the manufacturers of nuclear reactors liable for accidents, and the U.S. arrest of an Indian diplomat for employing a maid with an illicit document.

Modi will likely visit the U.S. in late September when the U.N. General Assembly is held. Local media are reporting that the Indian government has asked for an official summit meeting in Washington rather than sideline talks in New York. The U.S. refused to issue a visa to Modi nine years ago, which will make it interesting to see how Washington treats Modi now that he is a head of government.

Syed Akbaruddin, a spokesperson for the Ministry of External Affairs, said, "The prime minister's inbox relating to foreign policy visits is very crowded."

After visiting these significant nations, Modi will be busy traveling to countries in Southeast Asia, Europe and the Persian Gulf.

Major corporations and economic leaders are demanding that the government help boost exports and manufacturing, and introduce a goods and services tax to unify national and regional taxes as quickly as possible. As they did during the previous government, these companies and leaders will likely continue to adamantly oppose any tax hike or revision of labor laws that would favor workers. 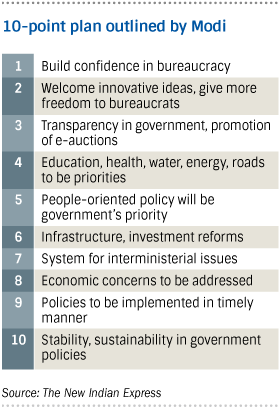 So far, Modi has said nothing substantial on economic reform, but the national consensus is that he will include a reform menu in his 2014 budget proposal, to be announced in July.

Consumer spending and foreign direct investment are India's primary growth engines. So the deregulation of foreign entries into multibrand retailing, such as supermarkets and hypermarkets, has been a topic of public debate. Out of consideration for the concerns of domestic industry, which is a Modi support base, the BJP has opposed foreign direct investment in multibrand retailing as a campaign promise.

A party executive close to Modi says attracting foreign capital is an international commitment and that the party promotes globalization, so there is room to address opposite opinions. The BJP is known for its nationalistic tilt, but as the ruling party it will likely pursue realistic policies.

June saw the rupee drop in value even further, and saw signs of resurgent inflation pressure. Causes for concern are surfacing, such as a surge in the price of oil, the lifeblood of the Indian economy, as a consequence of the crisis in Iraq. Monsoon rain, which is vital to the agricultural sector -- and in turn the entire Indian economy -- is expected to be below average this year. The new government has made a fairly good start, but the crucial time for delivering results is yet to come.