BANGALORE -- When Indian Prime Minister Narendra Modi's government unveiled its Goods and Services Tax in 2017, it was called the country's biggest and most significant tax reform since independence in 1947.

But with the economy crippled by the COVID-19 pandemic, the fiscal cracks are starting to show, threatening to tarnish Modi's economic policy and political legacy.

When the GST took effect, the central government promised to compensate state governments for the first five years, as states lost some of their right to levy indirect taxes. But since April, New Delhi has not paid the compensation, which it is supposed to do every two months. Arrears to the states have reached about 1.5 trillion Indian rupees ($20.5 billion) so far.

Finance Minister Nirmala Sitharaman blames the coronavirus outbreak for the missed payments, calling it "an act of God" that hurt the central government's revenue collection and left it with little to pay the states. As the states' demands for compensation grow louder, the central government has asked them borrow to make up the difference.

New Delhi on Aug. 27 gave the 28 state governments two options. One is to borrow from a fund totaling 970 billion rupees through the Reserve Bank of India, the country's central bank. The central government has pledged to refund the principal and interest on the loans after 2022.

The other option is for state governments to borrow a total of 2.34 trillion rupees, an amount that combines the estimated GST shortfall and COVID-19 related losses, on the open market. The central government would assume responsibility only for the principal after 2022 for states taking this option. The states would be on the hook for interest payments. 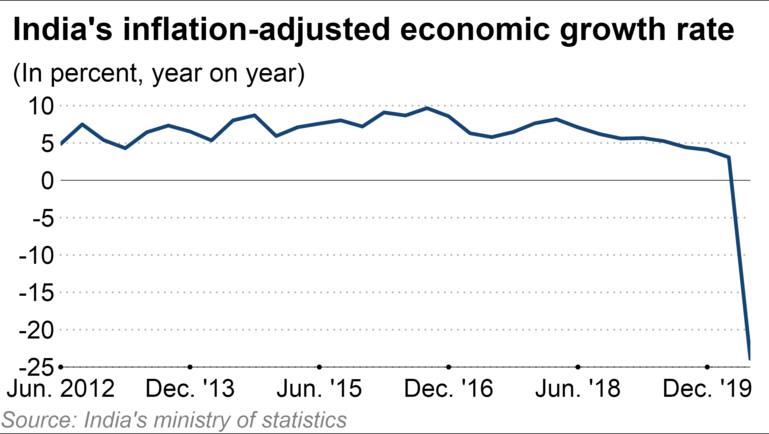 Twelve states, including Gujarat, Haryana, Karnataka and Uttar Pradesh, have chosen the first option. Of the 12, 10 are either run by Modi's Bharatiya Janata Party or by a BJP coalition. Only one, the northeastern state of Manipur, has chosen the second option.

But many states, especially those not ruled by the BJP, have written letters to Sitharaman rejecting the suggestion to cover the revenue shortfall by borrowing money. Some have threatened take the matter to the Supreme Court.

"Prime Minister Modi's legacy is in danger now," G.V. Joshi, a retired professor of economics at Mangalore University, told the Nikkei Asian Review. Modi made "a commitment" in the general elections of 2014 and 2019, both of which he won, to coordinate with the states under the slogan of "cooperative federalism."

"We have been following the principles of fiscal federalism: The center and the states have been able to maintain their agreements, irrespective of the crisis. However, the center is now leaving the states to fend for their own, which is unfair on [the central government's] part," Joshi said.

Arun Kumar, a professor at the New Delhi-based Institute of Social Sciences, said the credit for bringing the GST about goes to Arun Jaitley, who as finance minister and a close ally of Modi, had "made all the states agree" to give up a significant part of their indirect taxation rights, and agreed to compensate the states for their losses, with "his liaising and relationship-making abilities."

But Jaitley died in August last year and the delays to GST compensation started soon after. In December, after the southern state of Kerala threatened to take the dispute to the Supreme Court, the central government began paying the arrears.

The GST merges a plethora of indirect taxes, which had been under the jurisdiction of state governments, into a single levy administered by the central government. It is one of Modi's few notable economic achievements since he took office in 2014.

Although restrictions on foreign direct investment were gradually eased in several key sectors, such as the defense industry and insurance, Modi's government, in 2015, gave up on introducing a law aimed at making land purchases easier. And it has yet to enact reforms to Indian labor law. Domestic and foreign companies had expressed high hopes for these changes, which were supposed to deliver business-friendly rules, while safeguarding landowner and labor rights.

"The Modi-led BJP government only had GST to pat [itself on the] back for on the economic front, and now that GST has failed," said Amit Bhaduri, an economist and retired senior professor of economics at Delhi-based Jawaharlal Nehru University, adding, "There are no other major economic policies they implemented which are really useful to the nation." Traders shout slogans during a daylong strike held to protest the GST in Ahmedabad, India, in June 2017.   © Reuters

"Starting [with] demonetization, to GST, everything was implemented mindlessly," Bhaduri said. Demonetization refers to the removal from circulation of small-denomination currency notes. Changes to the Insolvency and Bankruptcy Code were "seen as a good move, but it hardly gave any benefits" to the economy, Bhaduri said, as the offenders kept on taking out loans.

Joshi agrees, saying, "If the GST becomes weak, I am sure that the Modi government will not have any claim of success in the next election on the economic front. There are no other policies which the Modi government can say ... is their successful policy."

And he stressed that the continuing delays on compensation to states will harm "the relations between the states and [the] center." This will lead to "a constitutional crisis, and the states will stop believing in democracy. For this, Modi government has to be blamed," Joshi said.