KOLAR, India -- Kolar, a city in India's southern state of Karnataka, is synonymous with its now-defunct gold fields. Today, the district's key export is "red gold" -- tomatoes being cultivated on over 20,000 hectares. But unlike gold, there are no guarantees in agriculture.

Despite a bumper crop this year, farmers are bitter because prices have crashed on the back of falling demand during the lockdown and restricted movement of traders and goods. A standard 15-kg box, which usually fetches 250 to 300 rupees ($3.40 to $4.10), is now selling for barely 70 rupees -- sometimes as low as 30. Desperate farmers are either allowing their crops to wither in the fields or dumping harvested tomatoes by the roadside.

Over the past three years, more and more farmers have taken up tomato cultivation after the water table significantly improved following the implementation of the K.C. Valley Project, which transports treated sewage water from the state capital Bangalore to 126 irrigation tanks in the perennially arid district of Kolar, according to K. Srinivasa Gowda, the president of the district's raitha sangha (farmers union).

Nalini Gowda, a farmer and union leader in the district, had pledged her lands with a private lender in order to borrow money to cultivate tomatoes. She has over five and a half acres (2.2 hectares) of tomatoes planted, but at current prices they are not worth harvesting. "It doesn't even cover the labor and transportation costs," she exclaimed.

She now feeds some of her tomatoes to her cows while the rest ripen and rot away in her fields. This has left her anxious because not only will she be unable to repay her loans but will also not have enough money to invest in the next season. There are 16 mouths to feed at home, plus school fees and medical bills. She is also in the middle of renovating her home. "Right now, I just want to survive this pandemic. I will explore alternate plans when the lockdown is lifted," she said.

According to data from the U.N. Food and Agriculture Organization (FAO), India is the world's second-largest tomato producer, after only China, with 19 million tons in 2019. The state-run market in Kolar is said to be the second-largest tomato market in Asia, after Madanapalli in neighboring Telangana state. Conveniently situated off a national highway, a large portion of the 1.5 million metric tons of tomatoes grown in Kolar and neighboring districts pass through here, carted off by traders from other states. They are also exported to neighboring countries like Bangladesh, China and Pakistan, according to P.S. Ravikumar, secretary of the market.

But now fewer traders are coming from other states because of the country's lockdown and fearing restrictions on movement and penalties. Usually, nearly 1,200 traders from various parts of Maharashtra, Gujarat, West Bengal and Odisha arrive here every year. But this year, barely 500 have come, and mostly from nearby places like Kolar and Bangalore.

Also, this market is the prime source of vegetables for the capital city, but with restaurants and eateries shut, the demand has fallen drastically, said Banakanahalli Nataraj, a trader from the Kolar market.

Harvest season in Kolar begins in May and peaks in June. Farmers who are at the edge of harvest are anxiously following news about the lockdown.

Narayana Gowda, who planted 10 acres of tomatoes, had already lost 3 acres and was planning to leave the rest in the field for another fortnight in case prices recovered. But the riper the crop, the less likely it is to withstand a long journey, fetching a lower price. So he eventually gave up and cleared the whole field to prepare for the next season.

Byalahalli Govinda Gowda, who heads a local cooperative bank, is waiting for the right time to harvest his 12 acres, nostalgically recalling the June of 2016, when prices rocketed to 900 to 1,200 rupees per 15-kg box. He wants the central government of Prime Minister Narendra Modi to set a minimum support price for tomatoes and procure them like it does rice, wheat, sugar cane and 20 other crops. Vegetables usually see large price fluctuations because the trade is largely unregulated and there is no government procurement. 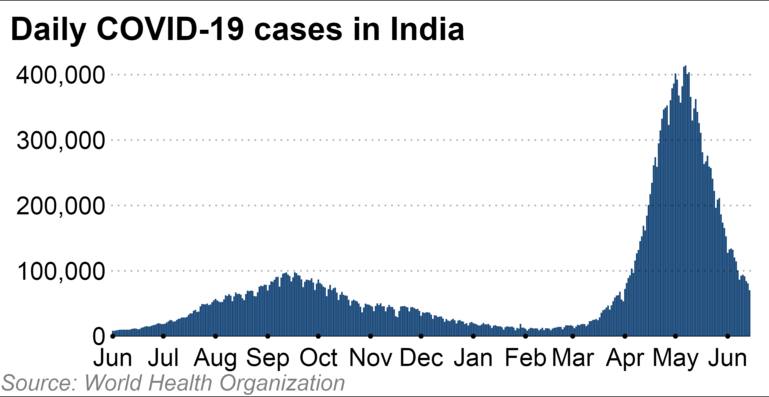 Meanwhile, the state government has announced relief payments of 10,000 rupees per hectare to vegetable, fruit and flower growers. This equals 4,000 rupees per acre and doesn't even begin to cover the cost of labor, fertilizers, pesticides and transportation. Nalini Gowda estimates that a more realistic compensation would be at least 50,000 rupees per acre.

A local student has mooted the idea of extracting lycopene from tomato waste, which can be put in fodder for cows to increase the yield of milk. But these kinds of ideas, even if they get to see the light of day, are inadequate against such price shocks.

India's coronavirus cases have come significantly down from their recent peak, with 70,421 new cases recorded on June 14, the lowest since March 31. But once a vast market economy is out of balance, it is unlikely to recover its pre-pandemic condition anytime soon.

Correction: The original version of this article was attributed to the wrong author.