India's migrant workers have been hit especially hard during the lockdown, with many forced to return to villages far from workplaces in the cities.   © Reuters
KIRAN SHARMA, Nikkei staff writerMay 8, 2020 14:53 JST | India
CopyCopied

NEW DELHI -- More than 120 million workers in India, most of them small traders and daily wage earners, lost jobs in April as economic activity all but ceased after the new coronavirus pandemic forced a nationwide lockdown.

Data released this week by the Mumbai-based think tank Centre for Monitoring Indian Economy shows that unemployment shot up to 23.5% last month from 8.7% in March. In the week ended May 3, it jumped to 27.1%, the highest ever.

The lockdown came into force on March 25, initially for three weeks then extended to May 17. Some curbs were eased on April 20, but many commercial activities and all public transport remain suspended.

Still, the tough measures have failed to contain the virus. As of Friday, COVID-19 cases in the country more than doubled over the past two weeks to 56,342 with 1,886 deaths.

Migrant laborers are suffering. Many started losing jobs as construction sites shut down. With no money, tens of thousands abandoned cities, trodding to their hometowns and villages -- some hundreds of kilometers away -- in the absence of public transport, reflecting their level of distress. 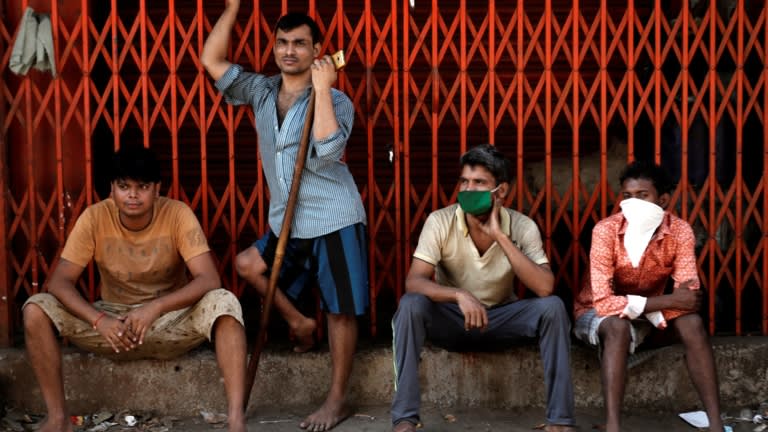 Idled migrant workers sit outside a loom on the outskirts of Mumbai on April 1 after the facility was shut due to the nationwide lockdown.   © Reuters

"This deep slowdown and across the board pain leaves large swathes of India's informal workforce vulnerable, particularly in the construction, manufacturing and services sectors," Crisil Research said in an April 30 note. "The most affected are daily-wage earners and those with no job security."

"I haven't worked since mid-March," says Pradip Kumar, a 28-year-old daily wage earner in the capital, who was taking in 342 rupees ($4.5) a day at a horse racing club before the facility suspended operations.

"I can't pay the 2,000-rupee rent for my one-room house in a slum where I live with my wife," he added, noting that wages of permanent employees at the club have not been impacted. "I'm not sure if I'll be able to work there again once the place reopens."

About 90% of India's 500-million strong workforce toils in unregulated businesses and jobs, part of a vast informal economy.

"The informal economy runs on a daily basis, so the real brunt [of the lockdown] has to be faced by the people such as rickshaw pullers and construction workers. They are the worst hit," said Sunil Kumar Sinha, principal economist at India Ratings and Research. 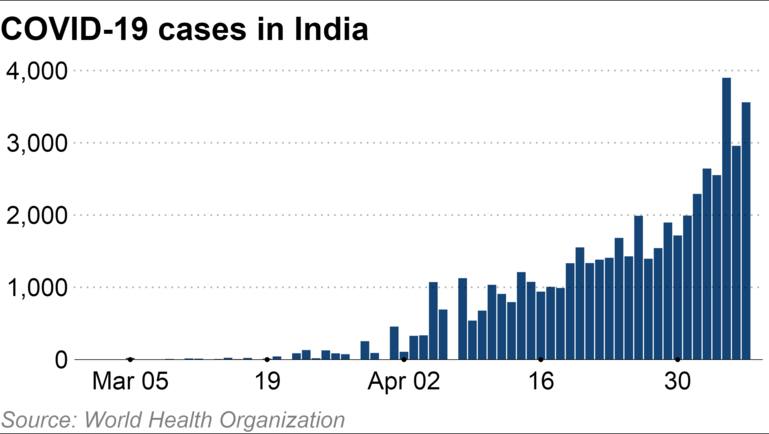 Another "fairly vulnerable" group, he pointed out, are those working as house help and personal drivers, as well as the self-employed in the service industry, such as beauticians and tailors. "They may be slightly better than the daily wage earners, but may be living on the edge as they may not have savings to survive long."

Mahesh Kumar, 35, is part of this group. He runs a small home business ironing clothes for office-goers in New Dehli, charging about 4 rupees per piece.

"I used to iron about 150 pieces a day before the lockdown, but now most people are working from home so I don't get more than 30 pieces," said the father of three school children. "How can I survive like this?"

He is far from sanguine about things returning to normal even as the lockdown lifts because people may maintain social distancing and avoid giving clothes to him. "I've started looking for another job," he says.

Kumar is not alone as the job situation worsens.

Monika, who goes by a single name, is a part-time maid who pulls in around 5,000 rupees a month. Ever since the lockdown, she was asked by her two employers not to show up as they feared infection from outsiders. 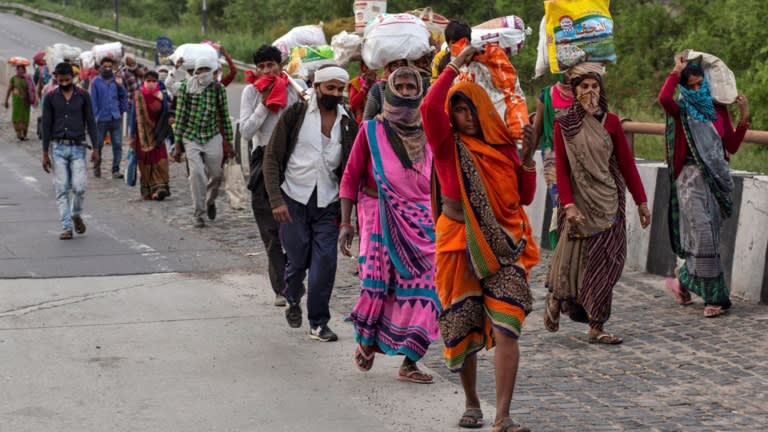 "One of my employers paid me for April, though I didn't work a day last month, but the other paid nothing," she said. The 29-year-old manages a household that counts her unemployed parents, using her savings and contributions from a brother.

For merchants, the Confederation of All India Traders said on Tuesday that the retail sector with its 70 million traders has lost about 5.5 trillion rupees since lockdown went into effect. At least 20% of the retailers are likely to go out of business in the next few months, it said, asking the government to provide a financial backstop for them.

Meanwhile, the government is evacuating Indians stranded abroad as air travel remains restricted. In the United Arab Emirates alone, some 200,000 Indians have asked for help to return home, an official statement said, amid reports that more than 400,000 Indians around the world are looking to return.

"Priority will be given to workers in distress, elderly people, urgent medical cases and pregnant women, as well as to other people who are stranded in difficult situations," the Consulate General of India in Dubai said in a May 4 statement.

Under the evacuation mission's first phase from May 7 to May 13, the country's national carrier Air India will operate 64 flights to 12 countries, including the U.A.E., U.K., U.S., Malaysia, the Philippines and Singapore, to repatriate 14,800 Indian citizens.

Once home, many may try to find jobs -- a difficult task in the pandemic-stricken economy.

"This is an unprecedented situation," Sinha of India Ratings and Research says, adding that economic activity has never hit a wall like this. "Even when things become normal, [employers] will reevaluate their workforce and there will be people who will be laid off. The impact of [the pandemic] will be significant on employment and employment opportunities."