China and India to buoy emerging Asia's pandemic recovery to 7.3% growth in 2021 In spite of the current coronavirus setbacks, India's economy is expected to grow 11% this year, the ADB says in a report.   © AP
CLIFF VENZON, Nikkei staff writerApril 28, 2021 08:00 JST | India
CopyCopied

MANILA -- India is set for a big economic rebound this year, the Asian Development Bank said in a new report, but warned that the current COVID surge could dampen the outlook for the country and for the wider region.

India and China -- Asia's two largest emerging economies -- are poised to lead the region's economic revival in 2021, thanks partly to vaccinations and improving global economic activity. The region also stands to benefit from the $1.9 trillion stimulus from the U.S.

India, which is battling its worst coronavirus outbreak, is expected to grow 11.0% this year after shrinking by 8.0% in 2020, according to the Asian Development Outlook, the bank's widely followed economic publication. Growth of 7.0% is projected for 2022.

"Even with the current severe outbreak, growth will be high in large part because of last year's big recession in India," ADB chief economist Yasuyuki Sawada told reporters on Tuesday.

India has also implemented targeted rather than large-scale lockdowns, along with a steady pace of vaccinations, Sawada added.

"But we do flag the downside risk from the current severe outbreak. It is a risk [and] it has implications not just for India but for South Asia more broadly and even for developing Asia," said Abdul Abiad, director at the bank's macroeconomic research division. The outlook will be reviewed in July, he said.

Developing Asia as a whole is expected to rebound with 7.3% growth this year, before moderating to a 5.3% expansion in 2022, the bank said. The region shrank by 0.2% last year. 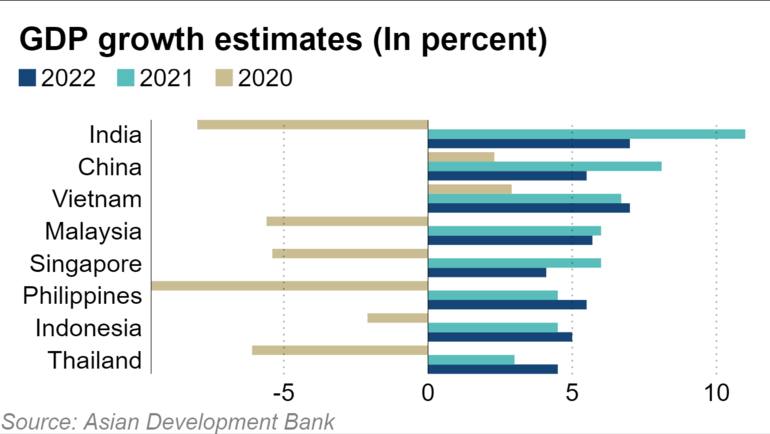 China, the region's largest economy, is on course for an 8.1% expansion in 2021 due to surge in private consumption and exports, before slowing down to 5.5% in 2022 in line with its long-term trend, the ADB said.

Meanwhile, Southeast Asian economies are all expected to recover, except for Myanmar, which has plunged into a chaos following a military coup in February.

The ADB expects Myanmar's economy to contract by 9.8% this year after a 3.3% expansion in 2020 that made it among the few countries in the region to escape recession last year.

The bank has put off its 2022 projection for Myanmar "given the very, very high uncertainty," Sawada said.

As a whole, the Southeast Asia sub-region is projected to grow 4.4% this year and 5.1% next. Vietnam, which has managed the pandemic relatively well compared with its neighbors, is tipped to become the best performer with a 6.7% expansion in 2021 and 7.0% in 2022.

Central Asia, home to oil producing economies, is set to bounce back this year as rising global commodity prices spur economic activity. The sub-region, which contracted by 1.9% last year, is set to expand by 3.4% in 2021 and 4.0% in 2022.

"Economies in the region are on diverging paths. Their trajectories are shaped by the extent of domestic outbreaks, the pace of their vaccine rollouts, and how much they are benefiting from the global recovery."