NEW DELHI -- In its first budget since returning to power in a landslide election, Prime Minister Narendra Modi's government unveiled plans to boost foreign investment as part of his push for a $5 trillion economy.

Speaking for more than two hours, she pointed out that inflows stood at $64.4 billion in the financial year that ended in March, 6% up from the previous year. This is despite global FDI flows slipping 13%, according to UNCTAD's World Investment Report 2019.

To make India a more attractive investment destination, Sitharaman said the government will consult with all stakeholders to examine suggestions for increasing FDI.

India currently allows 26% foreign investment in the publishing of newspapers and periodicals, while foreign entities are permitted to take 49% stakes in the airline and insurance sectors. Sitharaman said 100% investments will be permitted for foreign insurance intermediaries.

Relaxing sourcing regulations will help companies such as Apple and Swedish furniture maker Ikea that have been seeking to expand in the country with their own branded stores. Right now, India allows 100% foreign stakes in single-brand retail but requires investors to locally source 30% of the value of their goods.

"Plans to raise foreign investment limits for both FDI and equities will clearly help," Leong Lin-Jing, Asian Fixed Income Investment Manager at Aberdeen Standard Investments, said in an emailed note. "However, we would urge India to exercise caution and establish clear parameters around external borrowing to ensure it avoids the addiction to foreign capital that many emerging markets suffer from."

Modi's administration is making such moves at a time when global companies are scouting for new manufacturing destinations in the wake of the lingering trade war between the U.S. and China. Such moves are also key for Modi if he is to realize his ambitious target of growing the $2.7 trillion economy to $5 trillion over the next five years. 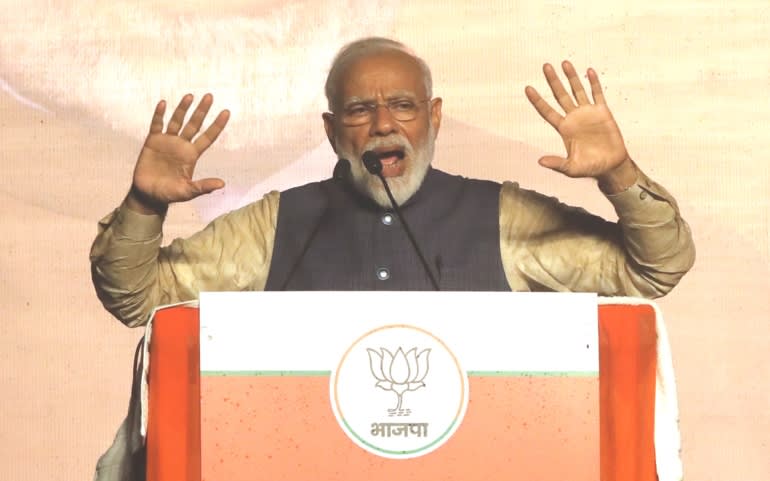 Narendra Modi's government will consult with all stakeholders to examine suggestions for increasing FDI.

Modi said this budget is for building a "new India" that will strengthen the poor, accelerate the pace of development, and help "fulfill the dream of a $5 trillion economy."

The economy grew 5.8% in the January-March quarter, the slowest pace in five years, putting pressure on Modi to quickly deliver on promised reforms. An economic survey released by the government on July 4 said a sustained real growth rate of 8% annually is needed to meet his economic target.

Sitharaman said India will become a $3 trillion economy in the current fiscal year, adding that in purchasing power parity terms, the country is the world's third largest economy after the U.S. and China.

She spoke about the need for structural reforms and investing heavily in infrastructure, the digital economy, and job creation in small and medium companies. The government, she added, plans to invest 100 trillion rupees ($1.46 trillion) in infrastructure over the next five years.

Sitharaman said strategic disinvestment of select state-owned enterprises would continue to be a priority.

The government "would not only reinitiate the process of strategic disinvestment of Air India, but would offer more [government-run enterprises] for strategic participation by the private sector," she said.

The Modi government has set a target of 1.05 trillion rupees of disinvestment receipts for the financial year ending in March 2020. The finance minister said on July 5 it would undertake strategic sales of state-run companies and continue to consolidate them. Customers stand outside Ikea's first store in India as it opened in Hyderabad, India, in this Aug. 9, 2018 photo.   © Reuters

She also said public sector banks would be provided with 700 billion rupees to boost credit.

"This will support growth by encouraging the flow of credit to the economy, although simultaneously adding to government debt," Gene Fang, Associate Managing Director, Sovereign Risk Group, Moody's Investors Service, said in an emailed note.

With Modi pushing India's space sector, she announced that a new state-run enterprise called New Space India has been incorporated as a new commercial arm of the Department of Space.

"The company will spearhead commercialization of various space products, including production of [satellite] launch vehicles... and marketing of space products," she said.

Reflecting Modi's aim of turning India into a hub for manufacturing electric vehicles, she said the government would lower the goods and services tax rate on electric vehicles to 5% from 12%, and provide income tax relief to consumers who take loans to buy EVs.