India-Japan trade pact going well but has room for improvement

MUMBAI -- India-Japan trade is growing, thanks to an economic partnership agreement that took effect in August 2011. And the growth is expected to further swell as the deal evolves.

The pact has already abolished or reduced many customs duties. The EPA was designed to see the near total elimination of most tariffs between the two countries during a period of 10 years. The flow of goods as well as people is expected to increase greatly as a result.

Japan-India trade was worth about $18.5 billion in fiscal 2012, an 83% increase from five years earlier. With the EPA's signing, Japan eliminated tariffs on most industrial goods and pharmaceuticals from India, which instantly raised Japan's trade liberalization rate with India to more than 90%. 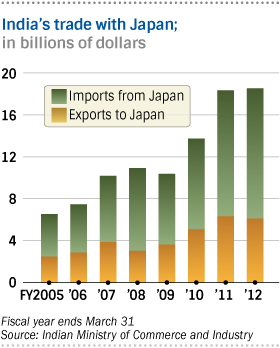 The number of items receiving immediate tariff abolition in India was, in contrast, small. But duties on rolled steel plate imports from Japan are scheduled to end gradually over five years, and import duties on lithium ion batteries are to taper off over 10 years. A large number of automotive parts from Japan will also become tariff-free.

The EPA is being credited with increasing the number of trade items -- and the accompanying certificates of origin filed for goods -- between the two countries.

Among the 12 countries with which Japan has EPAs or free trade agreements, India is its third-largest export destination, after Thailand and Indonesia. In 2012, Japan's exports to India increased significantly, with 14,000 items of steel products and 4,400 types of nonferrous goods being shipped.

India's top exports to Japan are processed foods, textile and leather goods, and petroleum products. India issued 44,000 certificates of origin for exported goods to Japan in 2012, according to Indian government sources. The rate of certificate issuance has increased 30% since.

Under the EPA, Japan is liberalizing trade for almost all items, the big exception being agricultural products. The decision to broadly eliminate duties means Japan now accepts far more duty-free items from India than it does from South Korea. Seoul and New Delhi have their own EPA, signed in 2010.

India has large trade deficits with and comparatively high tariffs than most of the world, which has been keeping an eye on how Japan fares by lifting so many tariffs on Indian goods.

"The primary purpose of an EPA is not to see it to conclusion," said Hiroshi Daikoku, a senior investment adviser at the Japan External Trade Organization. "In other words, it is important to continuously review and improve the pact."

In that regard, the EPA calls for delegates from both countries to meet every two years. Each side is to air any demands it might have of the other. At the panel's first meeting, in 2012, Japan called on India to improve its infrastructure as well as ease guidelines on the country's transfer price taxation, a tariff imposed on the Indian subsidiaries of Japanese companies. India, in turn, asked Japan to make it easier for Indians to get Japanese work visas for restaurant, IT and other jobs.

India, which has a large share of the global generic drug market, also hopes to expand drug exports to Japan. As such, it is asking Japan to further reduce import barriers -- not only tariffs. One nontariff barrier it would like to see shortened is the time Japan takes to issue permits on sales of Indian-made products.

Poor roads and power networks have discouraged many Japanese companies that want to expand into India. As such, there has been a surge in the number of private-sector industrial parks, such as Sri City, in the southern Indian state of Andhra Pradesh, where Japanese automaker Isuzu Motors now has its Indian production base.

Some Japanese companies are even taking the initiative to develop industrial parks in India. Mizuho Bank and engineering group JGC have tied up with the Singapore property developer Ascendas to build a large industrial complex in the state of Tamil Nadu, also in southern India. Ajinomoto and two other Japanese brands have already committed to moving into the complex. 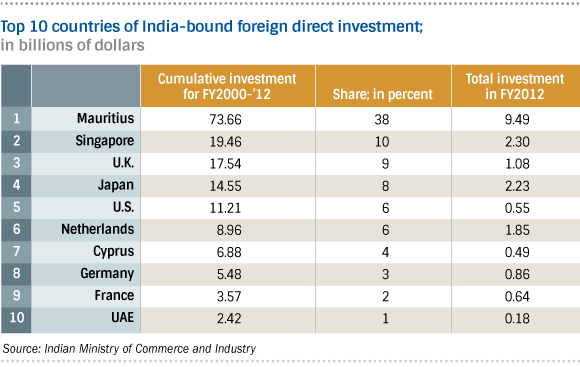 As for India's request, Japan would like to see more Indian nurses, lawyers and specialists in other fields working in the country. Japan, with its low birthrate, will need more foreign workers as time goes on.

Of course the idea behind any EPA is economic growth. And as far as that goes, Japan is also reminding India that it must further improve its investment environment. Foreign direct investment, after all, is a driving force of economic growth.

While the India-Japan EPA is benefiting both sides, this can only last if each country keeps working to make it better.