The Indian Ocean Rim Association is an organization made up of 20 countries with a combined population of over 2 billion people. It covers a vast area stretching from East Africa through India, and Australia to Southeast Asia. The association has started to discuss goals such as trade and investment promotion, and maritime safety and security. Unlike Pacific-based counterparts, discussions of tariff reductions are premature for IORA. It is a loose, consensus-based grouping with enormous differences in economic size and industrial structures among the countries involved, according to K.V. Bhagirath, IORA secretary-general. The association's members include tiny islet states like Seychelles and Mauritius, big oil producers like Iran and the United Arab Emirates, as well as South Africa and Singapore.

However, in a recent interview with the Nikkei Asian Review, Bhagirath, a former Indian diplomat, says that IORA seeks to tap the vast potential of the "blue economy." The Indian Ocean is the binding force bringing the forum's diverse countries together to harness marine resources. Possible areas of cooperation include sustainable fisheries, exploration for precious metals and minerals, and utilization of tides and other renewable energy sources from the ocean.

The importance of the Indian Ocean is also reflected in IORA's focus on safe passage at sea -- fighting threats of piracy and smuggling -- as a priority area in which member states should collaborate, said Bhagirath. The Indian Ocean is a global trade lifeline, accounting for nearly half of the world's cargo passages. Edited excerpts from the interview follow:

Q: At what stage is IORA in its moves to promote regional economic cooperation?

A: There are many challenges, many diversities. If you look at the organization, you have the least developed countries, developing countries, emerging countries, and advanced countries. So we have many problems, but we also have great potential.

It was very challenging for everybody. But when India became chair of IORA in 2011, it completely changed. It was revitalized and made more dynamic. We identified four priority areas: No. 1 maritime security; No. 2 trade and investment facilitation; No. 3 fisheries management; and No. 4 disaster relief. Everybody immediately became interested because maritime security was very bad in 2010-2011.

Australia took over the two-year chair in 2013. After Australia, Indonesia will become chair in 2015, and South Africa in 2017. IORA is beginning to gain what you would call critical mass. It is beginning to reach a stage where all countries come, participate and cooperate because most countries want to know what the organization will do for them.

Q: There is no concrete action?

A: What we have done is provide a platform for discussions of ways to promote trade and investment and ensure maritime security. For example, we held the first trade and industry ministers' meeting in July 2013. They discussed, among other things, improving port facilities and ocean transportation as a way of facilitating trade in the region. We also have a meeting for foreign ministers every year. Toshimitsu Motegi, Japan's economy and trade minister, attended IORA's meeting for renewable energy ministers in Abu Dhabi in January this year. Japan -- along with China, Egypt, France, the U.S. and U.K. -- is an IORA dialogue partner.

We also held meetings for customs and shipping authorities from member states. That's because these people are in a position to propose practical measures to ease the movement of goods between our members. To identify possible areas for cooperation, we hope to hold such meetings every two years.

Q: Do you have a target date for producing tangible results?

A: In IORA, all decisions are taken by consensus. So it is difficult to forecast a target. We are respecting the opinions of everybody. Reckless discussion could cause discord. 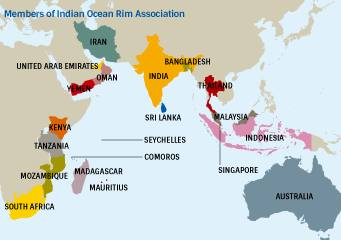 Q: Did you discuss reducing tariffs?

A: There is a proposal for boosting trade, such as creating a regional free trade agreement. But it is still too early, given the large number of countries involved and disparities that exist between them. It is just a beginning. One of the tricky issues is how to reconcile a regionwide FTA with the FTAs and customs unions that already exist in the region. For example, IORA has eight African countries. But Africa has the Southern African Customs Union and the East African Community. Gulf Arab countries have the Gulf Cooperation Council, and in Asia there is the South Asian Association for Regional Cooperation and the Association of Southeast Asian Nations. We have to identify common sectors where a country like Madagascar is interested and how it interacts, say, with Indonesia.

Q: What advantages does IORA have over other regional organizations?

A: I think it is important that our members are connected by the Indian Ocean, because it provides us with the last frontier of development. This is an ocean industry, what you call a "blue economy," seeking to harness huge untapped marine resources. That is the shared feature of all Indian Ocean countries.

IORA has small economies with small populations, like the island states of Comoros and Seychelles. But Seychelles and Mauritius together have one of the world's biggest continental shelves, an indication of the large potential of the blue economy.

Another merit of IORA is that the U.S. is one of our dialogue partners. Iran is a member, and Yemen is also a member. Only at IORA meetings can the U.S. sit and have discussions with these countries.

Q: Why do you have smaller, regional groupings within IORA?

A: We have the African cluster of six countries, including South Africa and Kenya. We have the Gulf cluster, which has the UAE, Oman, Yemen and Iran. Such clusters are designed to make it easier to explore possible areas where neighboring countries can work together.

There are very small countries like Comoros and Seychelles. When they sit together with countries like India, Indonesia and Australia, how can you make your voice heard? When they meet in small clusters, they're able to participate in the debate.