Employees of Unocoin working at the company's Bangalore office. Unocoin claims to have more than 350,000 users on its platform. (Photo by Avanish Tiwary)
AVANISH TIWARY, Contributing writerJuly 29, 2017 13:00 JST | India
CopyCopied

BANGALORE -- In the first week of June an as-yet unknown cause triggered a 640% surge in daily activity at CoinSecure, an Indian bitcoin exchange, which continued for about two weeks.

"Our servers just could not take the pressure of that kind of a traffic," said Benson Samuel, co-founder of CoinSecure. "The users just went mad over bitcoins that week. We have not been able to figure out why that happened, [or] what happened," Samuel added.

To ensure that traffic did not increase further, CoinSecure stopped enrolling new customers for a few days and asked existing customers to stop making transactions until its servers were ready to take the incoming load. Bitcoin prices were at a peak in June, rising from $2,900 to above $3,000. "We are not sure if the increase in traffic had anything to do with price rises as, due to the bullish market, the bitcoin price was anyway moving up," Samuel said.

Increased Indian interest in bitcoin, a digital or virtual currency released as open-source software in 2009, appears to have been triggered by the government's sudden withdrawal of 500 rupee and 1,000 rupee notes in November last year.

"One of the important things demonetization did was it led people see alternate investment opportunities, moving them closer to the whole digital revolution happening in India. People began to see the new things in digital, and bitcoin was definitely one of them," said Samuel.

Zebpay, an Ahmedabad-based bitcoin start-up, said its trading volume in November 2016 reached 1.2 billion rupees ($18.6 million) -- up 25% from October -- while CoinSecure's user base has risen to 150,000 in 2017, from 30,000 last year. Unocoin, a Bangalore-based bitcoin trading company, took just five months this year to add 100,000 customers, having taken the previous three years to add the same number of customers.

The government has yet to issue clear guidelines about the use of virtual currencies, making many merchants wary of accepting payment in this form. The Reserve Bank of India, the central bank, cautioned users and virtual currency startups in February against the possible pitfalls of trading, repeating an earlier warning.

"The creation, trading or usage of VCs (virtual currencies) including bitcoins as a medium for payment are not authorized by any central bank or monetary authority. VCs stored in electronic wallets are prone to losses arising out of hacking, loss of password, compromise of access credentials, malware attack, etc.," the RBI said. But the warning has neither deterred users from investing in bitcoins nor discouraged investors from funding virtual currency start-ups.

New Delhi-based CoinSecure, which raised $1.2 million in April last year from undisclosed investors, is in talks to raise more than $3 million in the next two months. Zebpay, operating since late 2012, has raised $1 million from Arjun Handa, vice chairman of Claris Life Sciences, and Amit Jindal, managing director of Jindal Worldwide. Bangalore-based Unocoin has secured two rounds of funding in the last four years, including $1.5 million in 2016 from Blume Ventures, Mumbai Angels and ah! Ventures. In 2014 it raised $250,000 from Barry Silbert, founder of Digital Currency Group.

Virtual currency startups in India fall largely into two categories -- exchanges and bitcoin traders. The exchanges act like marketplaces, matching sellers and buyers of bitcoins and charging commission to both parties -- currently 0.25% to 1%. Startups that trade bitcoins buy and sell them to users, making money through the spread -- the difference between the acquisition and sale prices.

CoinSecure plans to use its fresh funding to acquire more customers, scale up operations and create robust systems to handle more transactions. Zebpay, one of the bitcoin exchanges, said it handles transactions worth between 3 billion rupees and 5 billion rupees a month, and is not looking to raise any more money because the company is profitable. 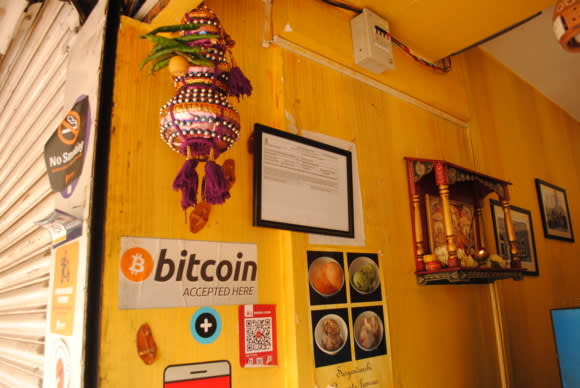 A restaurant in Bangalore announces that it accepts bitcoin. (Photo by Avanish Tiwary)

The startups are planning to expand their services by adding new virtual currencies, and encouraging merchants to accept payment in bitcoins. CoinSecure and Zebpay, for example, are considering adding ethereum, an open source platform that facilitates online agreements for users and offers its own virtual currency.

Zebpay said it will include ethereum on its platform by September this year. CoinSecure's Samuel said: "We can't say, for now, when we will have ethereum on the platform, but we are surely looking at it." As with bitcoin, transactions take place through a blockchain -- a secure online database.

Unocoin has partnered with bookshops, cafes and a bus ticket-booking portal, among other businesses, which accept payment in bitcoins using its Unocoin wallet. It claims to have partnerships with more than 100 such merchants. Zebpay allows users to pay telephone, television and data card bills in bitcoins.

However, it may be some time before people start using bitcoin widely as a currency.

"People do not want to part with their bitcoins now as they are waiting for its value to go up further. However, as and when the market stabilizes we will be able to see transactions happening in the online as well as offline world," said Arpit Agarwal, a partner at Blume Ventures. eTravelSmart, an online bus ticket booking company that has partnered with Unocoin, said that less than 1% of tickets booked are paid for in bitcoins on its platform.

Ajay Mallareddy, owner of Flying Spaghetti Monster, a restaurant chain, was ready to start accepting bitcoins earlier this year. But after the RBI's cautionary message, he paused. "We were about to launch it, but then we just put the whole thing on hold. We wanted to make sure we are doing the right thing and not crossing the line in terms of legality," Mallareddy said. After realizing that the RBI warning was merely advisory he is set to integrate bitcoin payments in partnership with CoinSecure.

In the absence of official guidance, the handful of startups trading in bitcoins have formed an association, the Digital Assets and Blockchain Foundation of India, to lobby the government and self-regulate the industry. Members have met Dinesh Sharma, the head of the government's inter-disciplinary committee on virtual currencies, and submitted their own list of possible regulations.

"We are expecting some update from the committee by the end of July. The user base is growing, and as long as that happens we will go on. As of now the RBI warning on virtual currencies does not have any legal implications on us as a company or individuals trading in bitcoins," said Sandeep Goenka, co-founder of Zebpay.

"It is a new technology, and government should look at it because of its merit. Any technology is only as good or bad as the user is. So at least people who are using it for fair purposes should be allowed to do it," Agarwal said.