The GDP figure matched the median forecast of 16 economists polled by Reuters. Private consumption, which accounts for more than half of Indonesian GDP, rose 5.17%, owing mainly to the Eid al-Fitr holiday that marks the end of Ramadan.

Although the growth rate was in broadly line with the annual average of 5% in recent years, the expansion was the slowest in two years. "Looking at existing global... and domestic conditions, the situation looks challenging," said Suhariyanto, head of Indonesia's statistics agency, raising doubts over whether the government will reach its growth target of 5.3% for 2019.

Indonesia is largely isolated from global supply chains in Asia, minimizing the effects of the U.S.-China trade war. However, falling prices for export commodities such as palm oil "had an impact on Indonesia's economic growth," Suhariyanto said.

Lower export earnings, in turn, have hurt Indonesians' purchasing power, which executives at Japanese automakers say resulted in a 13% drop in car sales in the first half of the year. The current-account deficit also leaves the country vulnerable to currency sell-offs in times of global economic uncertainty. 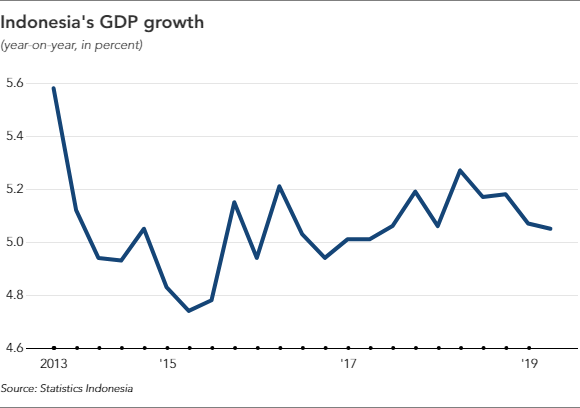 Widodo, whose second term begins in October, has been looking for ways to spur growth. In July, Bank Indonesia, the central bank, helped by slashing its benchmark interest rate for the first time in nearly two years. Last year it had raised rates by a total of 175 basis points to protect the rupiah after the currency fell to a 20-year low.

"Past monetary tightening will probably continue to weigh on growth, even though rates are now being cut. This year's budget suggests that fiscal policy won't provide a boost to growth, either," said Gareth Leather, senior Asia economist at Capital Economics. "Meanwhile, we expect a further softening in global growth to weigh on exports. Overall, while the official figures are likely to show growth remaining stable at around 5%, we expect growth on our measure to slow to around 4.5% this year."

The president prioritized infrastructure-building in his first term and now hopes to focus on developing human capital. The government has announced a "super deductible tax" scheme that it hopes will encourage companies to set up research and development facilities and vocational training centers in Indonesia. Widodo has also vowed to reform the country's rigid labor laws, which make it hard for companies to fire employees.