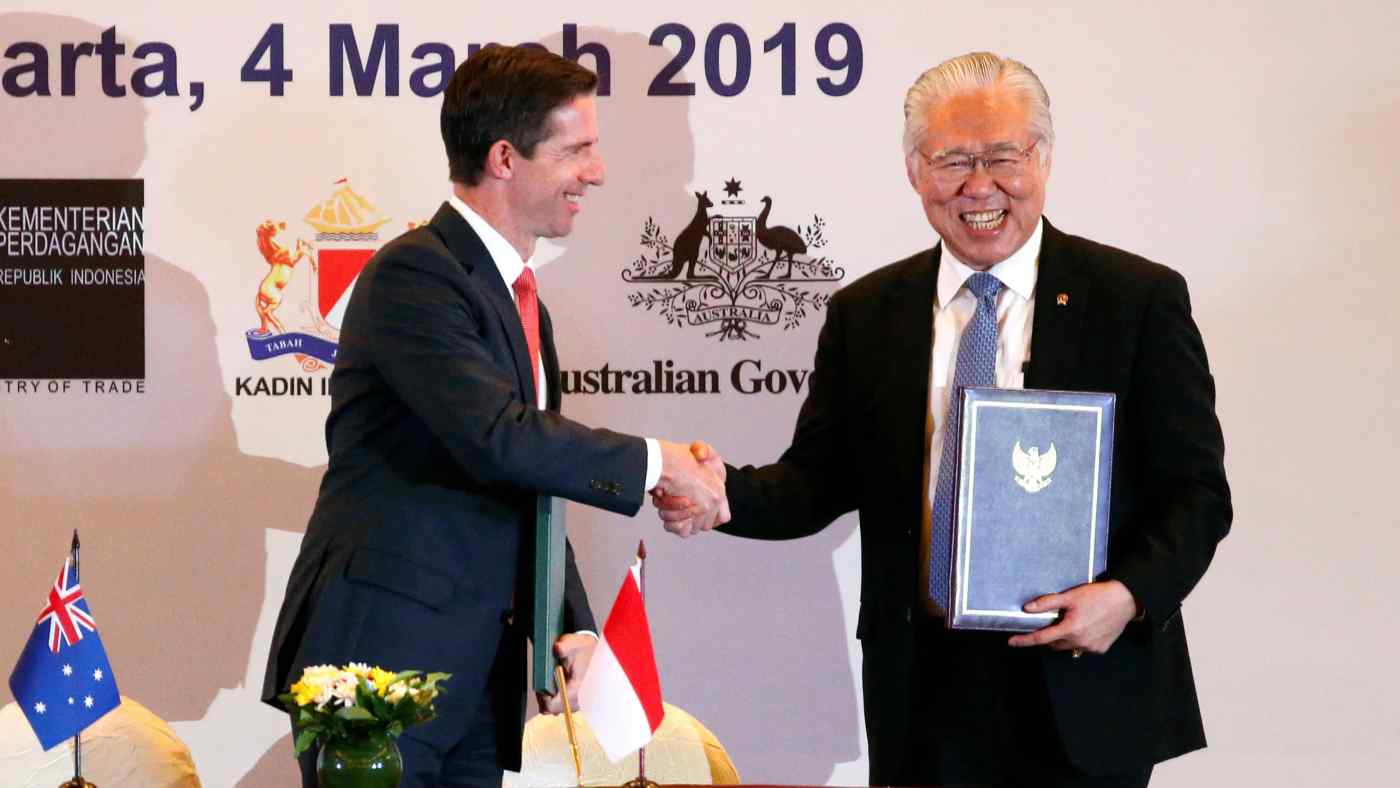 JAKARTA -- Indonesia and Australia have finally put pen to paper on their Comprehensive Economic Partnership Agreement, after months of delays due to diplomatic wrangling over Canberra's plan to move its Israel embassy to Jerusalem.

Indonesian Trade Minister Enggartiasto Lukita and his Australian counterpart Simon Birmingham signed the deal, dubbed the IA-CEPA, on Monday in Jakarta. This will gradually eliminate 94% of Indonesian tariffs, covering 99% of Australian trade with the archipelago nation by value.

"The signing of the agreement reflects a deeper level of engagement in the already long established economic relations between Indonesia and Australia," the two ministers said in a joint statement. "The agreement aims at a more comprehensive, high quality and mutually beneficial economic partnership."

The IA-CEPA will still need to be ratified by both countries' parliaments. The two ministers told reporters that they hope to ratify and put the agreement into force by the end of this year. There is a degree of uncertainty with regard to that target on the Indonesian side, as the country heads into a presidential and general election in April. Depending on the outcome, the deal could be left adrift.

In 2018 Australia was Indonesia's 12th-largest export destination and eighth-largest import destination, excluding oil and gas. Including those fuels, bilateral trade between the two countries amounted to $8.6 billion, up 1.1% from the previous year, according to data from Indonesia's Ministry of Trade. New Priok Container Terminal One in Tanjung Priok, Indonesia, in 2017: The trade deal will still need to be ratified by both countries' parliaments.   © Reuters

"So far we have quite a substantial [trade] deficit [with] Australia, especially if we take into account the deficit from the service sector," said David Sumual, chief economist at Indonesia's Bank Central Asia. "I expect improvement in our trade balance with Australia going ahead after IA-CEPA is signed." Indonesia's trade deficit was one of the reasons why its currency, the rupiah, plunged to a 20-year low against the U.S. dollar last year.

The IA-CEPA has been under negotiation since 2010. Australian Prime Minister Scott Morrison and Indonesian President Joko Widodo agreed to the terms in August last year when the Australian premier visited Indonesia shortly after taking office. However, all talks came to a halt when, in October, Morrison proposed the relocation of the country's embassy in Israel to Jerusalem from Tel Aviv. The move angered Indonesia, a country with the world's largest Muslim population.

In December, Canberra formally recognized west Jerusalem as the capital of Israel but backtracked on the embassy relocation. It also added that the government will recognize a future state of Palestine with its capital in east Jerusalem after a settlement is reached on a two-state solution. The Australian premier's decision is believed to have eased tensions with Indonesia, bringing Widodo's government back to the table.

While the deal may provide an economic boost to the archipelago nation after it takes effect, it could also be a headwind for President Widodo as he heads into the April presidential and general election. Although Australia's recognition of the Israeli capital does not cover the whole of Jerusalem, Muslim voters may still view the trade deal as Jakarta giving in on a contentious issue.

Widodo's absence from the signing ceremony on Monday suggests he wants to distance himself from the trade deal. The president chose to welcome high school students at the presidential palace, while Vice President Jusuf Kalla attended the signing in his place.

Kalla told reporters that the two countries had agreed now was the best time to sign the deal "because the other problem is settled. This can increase Indonesian exports and investment in Indonesia."