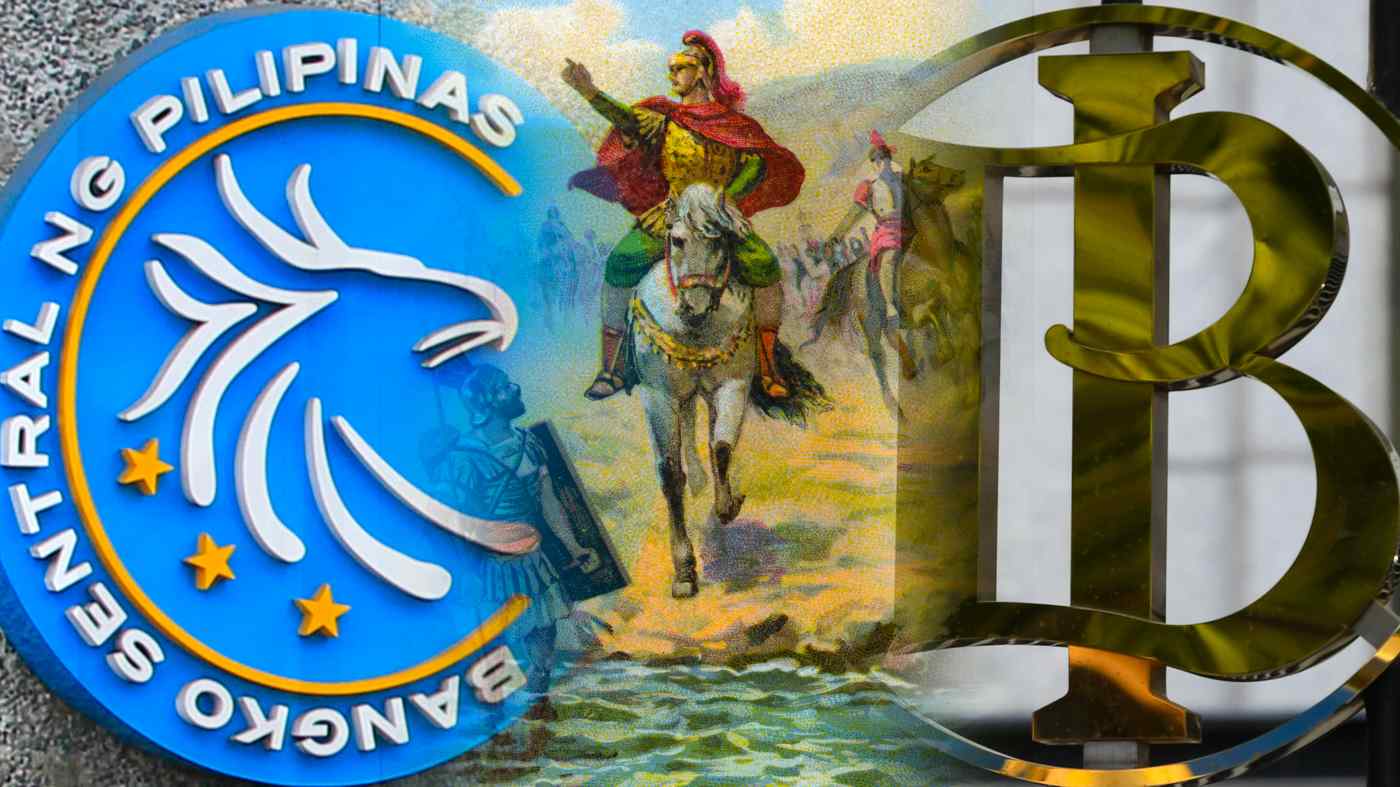 JAKARTA/HONG KONG -- Economic infection from the new coronavirus has pushed some central banks in developing Asia to cross the Rubicon and buy bonds directly from governments.

Known as debt monetization, these bond purchases by Indonesia and the Philippines essentially provide free money for governments to spend, unless they are reversed at some point.

It's a risky strategy as they could erode confidence in monetary authorities and weaken currencies, potentially triggering uncontrollable inflation. No major central bank in the developed world has made such a move in recent times.

"In the extreme, investors could lose faith in so many emerging markets due to over-easy policy that there is systemic risk to emerging markets as an asset class," economists at Bank of America wrote in a recent report.

"If there are sustained currency losses in emerging markets, inflation and capital-flight risks would rise. This would prompt central banks to tighten policy abruptly, weakening their economies further."

Bank Indonesia has by far been the most aggressive in the region when it comes to unconventional monetary policy.

President Joko Widodo signed a regulation in March that allows, among other things, the central bank to purchase government bonds in the primary market.

Despite Bank Indonesia calling this a "last resort" when there is not enough demand from investors for Indonesian debt, it has already purchased 22.8 trillion rupiah worth of government bonds directly from the government as of May 14. The central bank will be allowed to continue with such measures until 2022, when the regulation expires.

Bank Indonesia has also been active in the secondary market, purchasing 166.2 trillion rupiah worth of government bonds from January to April, as the country saw sharp investment outflows. It has also slashed its benchmark interest rate by a combined 50 basis points since the start of the year, and cut the reserve requirement ratio for financial institutions. 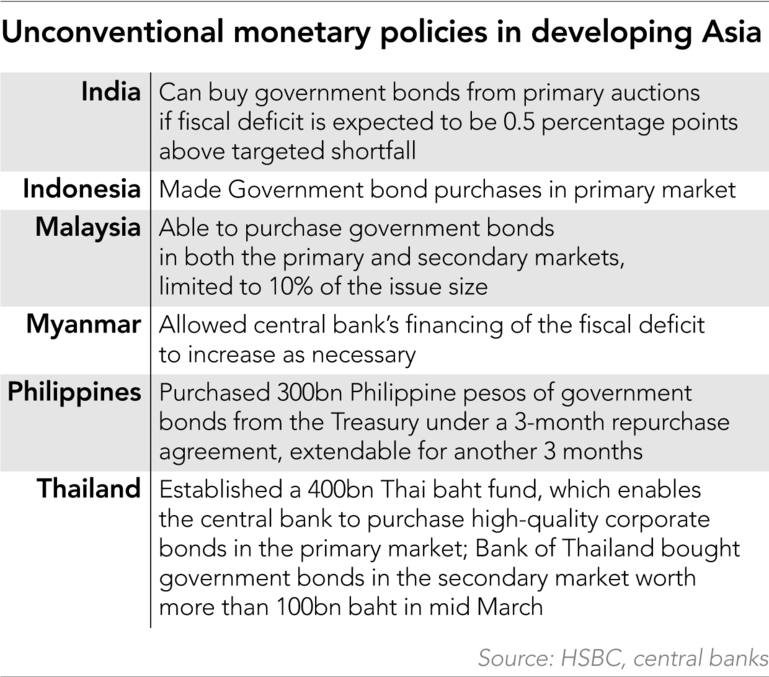 The Philippines has also crossed the Rubicon, albeit in a more sustained manner.

Bangko Sentral ng Pilipinas in March purchased 300 billion peso (nearly $6 billion) of government bonds directly from the Treasury in March under a three month repurchase agreement, which can be extended for another three months.

"The central banks are assuming by intervening directly in primary bond markets, they can stop the rise in bond yields and that in turn would add to investor confidence. The next part of the thinking is the fact that it will eventually bring foreign inflows," Michael Spencer, chief economist of Asia Pacific at Deutsche Bank, told the Nikkei Asian Review. "The risk here is that if foreign investors aren't attracted back... all this printing of money would depress the currency, which could lead to even more outflows," he added.

While other central banks in developing Asia have yet to dip into the primary market, they stand ready should the need arise.

Malaysia's central bank is already allowed to purchase bonds directly from the government, while the Reserve Bank of India can do so if the fiscal deficit is expected to be 0.5 percentage points above the targeted shortfall for the year.

The government may ask the RBI to monetize about 6.8 trillion rupees ($90 billion) of India's 20 trillion rupees of stimulus, Banc of America Securities said in a note on Thursday. Economists Indranil Sen Gupta and Aastha Gudwani said this would be needed to make up the full amount as other means would not suffice.

Besides mopping up government bonds through its open market operations, India's central bank cut its benchmark interest rate by 75 basis points in March, opened special liquidity facilities for mutual funds and cut the minimum cash reserves that banks need. It has also reduced the minimum liquidity that banks need to hold, extended a loan moratorium and suspended repayment on some loans.

Myanmar had been cutting back on its central bank's government debt financing as it aimed to transform and grow its financial sector. But it has now decided to "allow the central bank's financing of the fiscal deficit to increase as necessary up to a suitable level consistent with a target growth in the money supply."

The Bank of Thailand has cut rates and has pledged to ensure sufficient liquidity for markets to function well. It has used its foreign exchange reserves to buy government bonds from the market. The Philippine central bank has also slashed rates by 125 basis points, reduced the reserve ratio for banks, and offered a slew of relief to lenders. 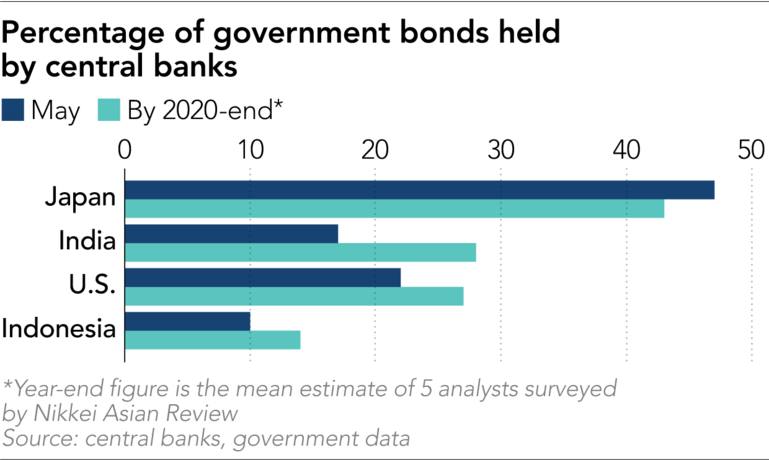 Economists and market watchers agree that the risks of runaway inflation are low for now, and Indonesia and the Philippines are experiencing low price rises by historical standards.

"Debt monetization typically stokes inflation but the decline in oil and commodity prices will help in containing the price cycle," said Kiyong Seong, Asia rate strategist at Societe Generale in Hong Kong. "In the medium to long term when situation normalizes it will lead to higher inflation but for now the focus is on limiting the fallout from the pandemic."

"How they respond to inflation as and when it starts rising, and how these programs are managed as markets and economies normalize [are challenges]," he said. "The risk would be if investors get the perception that central banks are monetizing debt despite the market's ability to absorb supply -- or if the broader monetary policy tools and or stance are inconsistent with the central banks' objectives, inflation in particular."

The U.S. Federal Reserve, the European Central Bank and the Bank of Japan have also bought government bonds, but only in the secondary market -- purchasing them from investors like banks.

Their rationale was also different, deploying such quantitative easing to avoid deflation as they were unable further lower benchmark interest rates.

In developing Asia, the measures are primarily aimed at stabilizing the market after the region saw fund outflows bigger than the global financial crisis more than a decade ago, and to fund government spending to cushion the economic hit from the coronavirus.

But a common concern among the central banks is how to unwind the asset purchases without disrupting the economy and financial markets.

"We think timing is everything. Any attempt by the Federal Reserve, the European Central Bank or the Bank of Japan to unwind their balance sheets ahead of emerging central banks... could lead to a rerun of the 2013 post taper tantrum emerging market crisis. Avoiding such an outcome could require some policy coordination," said economists at Bank of America.

"Given the unprecedented nature of the COVID-19 shock, it is hard to fault emerging market central bankers for their unprecedented response. But such aggressive easing comes with a wide range of risks that we are only beginning to understand."