Jokowi government wants to grow industry to 10% of GDP The sector received a major boost in July when the UNESCO World Heritage Committee registered the Ombilin Coal Mine, in the small mountain town of Sawahlunto, as a World Heritage Site at its meeting in Azerbaijan.

The Ombilin mine is Indonesia's fifth World Heritage Site. Its four predecessors are world-famous places mentioned in school textbooks internationally, such as Borobudur, a huge Buddhist temple, and the Sangiran Early Man Site where fossil remains of the "Java man" were recovered.

But UNESCO's recognition of the hitherto little-known Ombilin mine came as a surprise to many.

The mine opened in 1892 when Indonesia was a colony of the Netherlands. As one of the world's leading coal mines, it produced coal equivalent to 90% of the total annual energy consumption of Indonesia, which was then called the Dutch East India Co.

The construction of coal-fired power generation plants and railways was promoted from the late 19th century till the early 20th century. But when coal went into decline as a major energy source after the 1950s, Ombilin began to lose importance. In 1999, Bukit Asam, the major state-owned Indonesian coal company which was managing the mine, closed down operations there.

Sawahlunto, located 90 kilometers from West Sumatra's provincial capital of Padang, declared in 2001 that the closed mine would turn the city into a tourist destination, but it failed to attract many visitors. Then, in 2012, the city decided to pursue UNESCO World Heritage Site status for the mine.

With the prestigious accolade secured, and an associated uptick in visitors going to view the mine's the shiny black bed of coal, a plan is underway to convert an old colonial building nearby into a hotel. 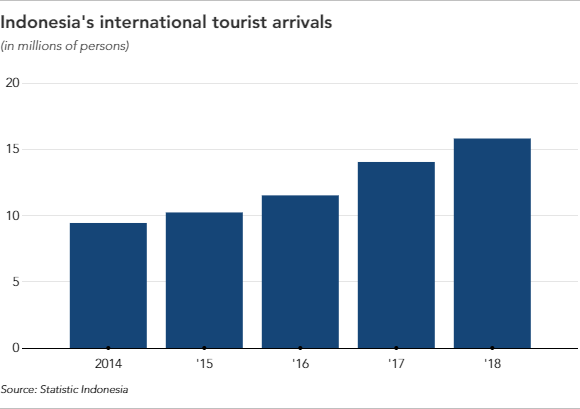 "We hope that tourists will visit here from all over the world," said Rahmat Gino, 40, head of the Sawahlunto Culture and Historical Preservation Agency.

Tourists visiting the city from abroad have also been increasing since the old mine was inscribed as a UNESCO heritage site.

Although there remain many industrial heritage sites which have yet to become widely known, some are already being utilized in the promotion of local tourism. For example, Belitung, an island in the province of Bangka Belitung off the east cost of Sumatra, has become a popular destination for tourists. BHP Billiton, a world-leading British resources company formerly called Billiton, and Indonesian state-run company Timah mined tin on a large scale in Belitung.

The island has been attracting much attention since the huge success of "Laskar Pelangi" (The Rainbow Troops), a novel by Andrea Hirata about local mine workers' children -- which was also adapted in a hit movie -- and its old tin mines have become popular as sightseeing spots.

The Widodo administration is promoting the development of tourism resources across the country to make Indonesia into a "tourism-oriented nation." It plans to increase the number of inbound tourists to 20 million while also promoting domestic tourism.

Tourism now accounts for a little over 6% of Indonesia's GDP, but the government hopes to quickly raise the ratio to the global average of around 10%.

Indonesian tourism is already well-known for Bali, the world-leading resort island. But the Widodo administration is developing other tourist draws such as ecotourism involving tropical rainforests and the sea, and religion-themed tours based on the coexistence of Islam, Christianity, Buddhism and other religions in the country. Various other themes are also under consideration to promote tourism.