JAKARTA -- Indonesia will rejoin the Organization of the Petroleum Exporting Countries in January, 2016 after a hiatus of seven years.

The government hopes returning to the cartel will help it find partners to secure stable energy supplies. The move is also aimed at driving "oil mafias," which control gasoline imports in the country, out of business.

Sudirman Said, Indonesia's minister of energy and mineral resources, who reported the country's return to OPEC to President Joko Widodo, told reporters on Dec. 7 that forming partnerships with Middle Eastern oil producers was a reason for rejoining the group. "We will join hands with Saudi Arabia to build up oil refineries and procure crude oil, purchase liquefied petroleum gas from Iran at low prices and on a long-term basis, and sign a memorandum of understanding with Qatar for a power generation business," he said. At a meeting in Vienna on Dec. 4, OPEC approved Indonesia's readmission as the group's 13th member. Indonesia joined OPEC in 1962, two years after it was set up, and is the sole member from Asia. "To attract investors to our country, it is meaningful to join with oil-producing nations in the international arena," Sudirman said.

Indonesia, a country of 250 million people, became a net oil importer in the early 2000s. It needs a stable supply of crude oil at low cost, and to increase its refining capacity. In the 1990s the country pumped 1.5 million barrels of crude per day, but now daily output is less than 900,000 barrels.  Output declined as investment stalled amid political and economic unrest at the end of the 1990s in the aftermath of the Asian financial crisis. Dwindling output from existing oil fields and the long absence of new development plans explains much of the falloff.

For OPEC, Indonesia's return represents a chance to secure a market. The cartel faces increasing competition with Russia, which is boosting production. The U.S. is importing less due to its abundant deposits of shale oil and gas. OPEC apparently wanted to corral Indonesia, whose demand for energy is expected to grow, as a member.

"It is also worth noting that Iran and Iraq will make a full-scale return to the international oil market," said Ken Koyama, chief economist at the Institute of Energy Economics, Japan. As U.S. and European sanctions expire and regional wars come to an end there will be more exporters. This will help Indonesia buy crude on favorable terms.

A partnership with a big OPEC member has already taken shape. Saudi Aramco, Saudi Arabia's state-owned oil company, and Pertamina, its Indonesian counterpart, signed an agreement on Nov. 26 to expand a refinery in Cilacap, in Central Java. The expansion is to be completed in 2021. The Saudi company will supply the crude and is expected to offer help with refining and sales in Indonesia.

Jakarta hopes OPEC will also be a source of external pressure that helps its own oil industry become more transparent.  Kurtubi, an Indonesian lawmaker and an oil and gas specialist, thinks rejoining OPEC will allow Widodo's government to drive out so-called oil mafias and push reforms.

Widodo and his running mate, Vice President Jusuf Kalla, started referring to these groups in the 2014 presidential campaign. The "mafias" are people and organizations that profit from the country's opaque importing system. Widodo has singled out Petral, Pertamina's Singapore-based subsidiary, which dominates gasoline exports to Indonesia, for criticism.

Indonesia's oil imports have risen rapidly since 2004. The country is heavily dependent on Singapore for supplies of regular gasoline, relying on the city-state for nearly 70% of domestic consumption by volume in 2014. In value terms, imports of oil and gas from Singapore grew more than fourfold over the decade through 2014. 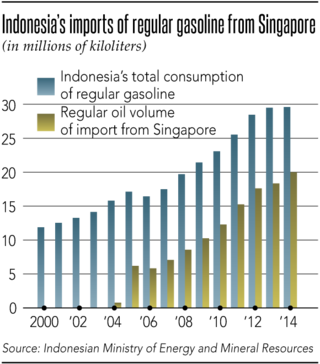 The import business has been a huge moneymaker for Petral and others. Indonesia's oil-refining capacity has remained almost unchanged since the end of the 1990s despite booming demand. Critics say the lack of new investment was a deliberate effort to protect vested interests.

Widodo set up an independent body to investigate the problem in November 2014. After the group submitted its report, he decided to dissolve Petral.  In May, he suspended the company's operations. Dwi Soetjipto, president and CEO of Pertamina, announced on Nov. 9 that an internal investigation had "revealed that third parties other than Pertamina and the government had participated in oil imports through Petral, and the importers had been obliged to accept purchase conditions that involved unfairly high prices."

Indonesia has moved to buy crude oil directly from oil-producing countries in response. Boosting domestic refining capacity would also do much to undermine the oil mafias.

In addition to joining OPEC, Indonesia joined the International Energy Agency as an associate member on Nov. 18. The IEA is, in a sense, the mirror image of OPEC -- a group of developed-country oil consumers. Indonesia hopes to cut its domestic consumption of oil and gas with help from the IEA in developing renewable energy. OPEC and the IEA have sometimes clashed over crude prices. Indonesia joined the two organizations nearly simultaneously.

Indonesia has succeeded getting help from Saudi Arabia in expanding the Cilacap refinery, but to attract more investment it may need to offer incentives, such as a tax holiday. The oil mafias have yet to be dealt with fully. Widodo is hoping that by offering producers a large, lucrative market in tough times, they can help him stamp out oil profiteers at home.