The outlook is dim. The World Bank said this month that the country's growth rate could slow to 5% this year, while in a separate report in September, it said weak productivity and slowing workforce hires could trim the potential growth rate to 4.9% next year. This increases pressure on policymakers to push through reforms -- rather than rely on resource exports -- to get the economy back on track.

Since Jokowi took office in October 2014, growth has hovered around 5% -- a rate that economists see as the minimum needed for businesses to keep investing and take advantage of the country's huge consumer market. If this declines, however, at least one senior Japanese executive will be worried. "We'll have to change our outlook for the country if economic growth falls below 5%," the person said.

But Widodo remains bullish. He has set a growth target of 5.3% for 2020, promising an array of reforms to attract foreign investment and nurture export industries. The president has already pledged to create more jobs to speed development of human resources, as well as ramp up exports to narrow the country's persistent current-account deficit.

The administration has failed to attract the foreign investment it hoped for, leaving the economy reliant on commodity exports. Coal and palm oil still account for about 25% of Indonesia's exports -- excluding oil and gas -- a figure little changed from the 28% before Jokowi took office. The U.S.-China trade war is also hurting exports as resource prices decline, and consumer spending is slipping. 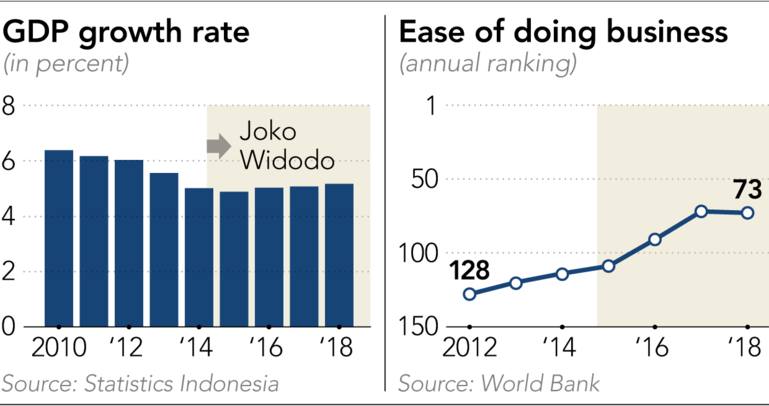 The main obstacles to more foreign direct investment are the mountains of regulations and red tape, which delay the granting of business permits and licenses.

Jokowi's efforts in tackling this deep-rooted problem have not been entirely futile. During his tenure, the country has risen to 73rd from 128th in the World Bank's "ease of doing business index."

But Indonesia has fallen behind its neighbors in the race to lure investment. Of the 33 companies that announced plans to move operations out of China during the June-August period, 23 picked Vietnam. None of them chose Indonesia.

"Businesses are moving out of China but are not coming to Indonesia because Indonesia's neighbors are more welcoming," the World Bank said in a private report conveyed to the president. "Indonesia must surprise investors with bold reforms that create credibility that Indonesia is really open for business, certainty that rules are predictable and not discretionary."

Many Japanese companies are among those shifting the focus of their overseas investment strategies away from Indonesia in favor of Vietnam and Thailand.

In addition, the country has been struggling to upgrade its aging infrastructure, a process also hindered by the Byzantine procedures for obtaining permissions from the government. The only project completed in Widodo's first term worthy of mention was a new subway system in Jakarta.

But Widodo is gradually stepping up efforts to attract more investment. He has decided to upgrade the Indonesia Investment Coordinating Board to ministry status -- a move that will speed up the granting of licenses for foreign investment. He has also announced new tax breaks for investment, including cuts in the corporate levy.

Still, with growth slowing and foreign investors shifting attention elsewhere, Widodo's goal of placing Indonesia among the top five economies in the world by 2045 may have to be pushed back.