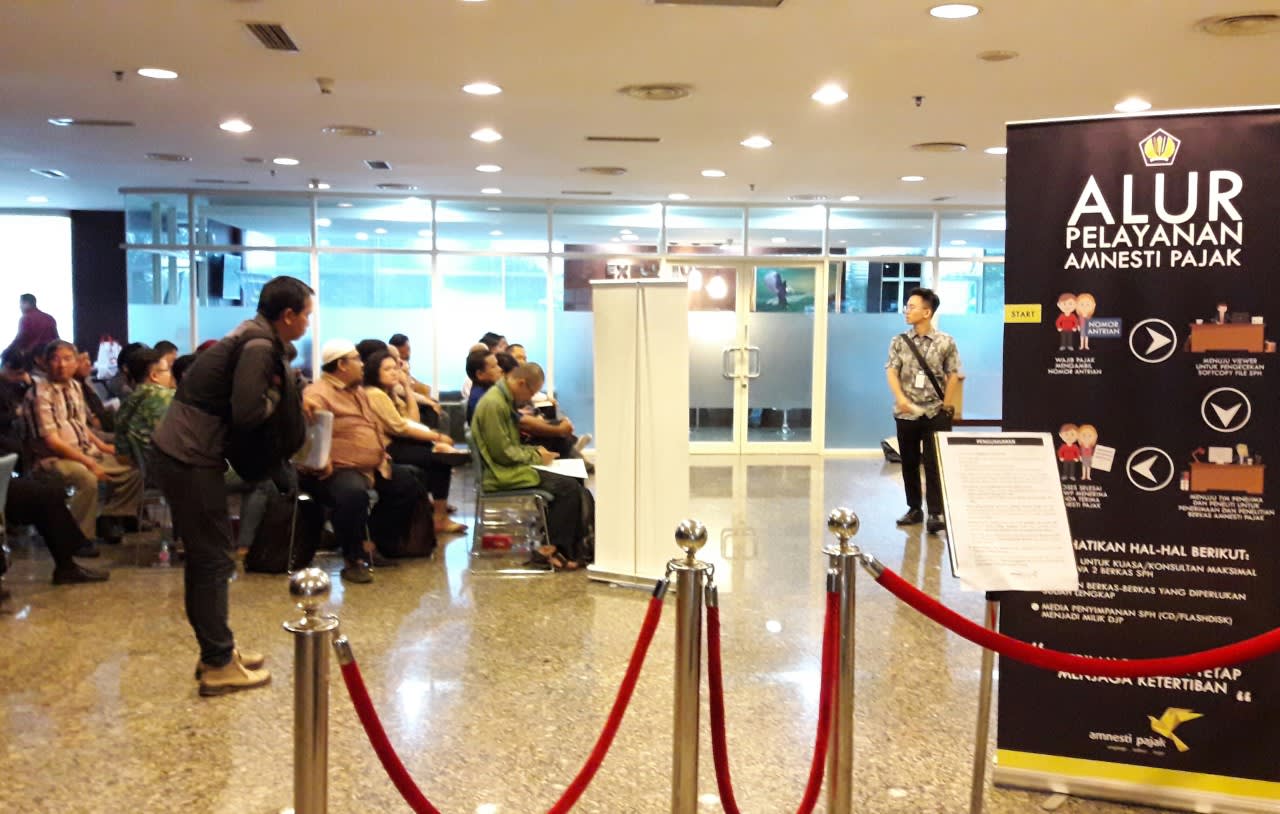 Indonesians wait to apply for the tax amnesty program in Jakarta on March 31 -- the final day.

JAKARTA Indonesia's tax amnesty program, which came to an end on March 31, has exposed the massive scale of uncollected taxes in the country.

Over the course of nine months, citizens declared at least 4,866 trillion rupiah ($365 billion) in hidden assets -- an amount equal to nearly 40% of Indonesia's gross domestic product. But the total of overseas assets brought home was far below the government's target, dealing a setback to its infrastructure development plans.

On deadline day, Indonesians crowded tax offices in major cities. At the headquarters of the tax directorate general in Jakarta, at least 1,000 people waited to submit documents to the staff, many of whom would work through the night to accommodate last-minute applicants.

Finance Minister Sri Mulyani Indrawati visited the office late in the evening, saying she was "satisfied" with the team's hard work. "After today, hopefully the tax sector will move from darkness into light," she said. "I hope this moment can serve as a milestone toward a new era of good governance and improved business process and work performance."

Of Indonesia's 250 million people, only 32 million are registered taxpayers and only 8.9 million submitted tax returns last year. The amnesty, which granted immunity from prosecution to citizens who declared hidden assets and paid a small penalty, was aimed at giving government revenue a quick boost while widening the database of taxpayers and taxable assets.

Around 965,000 people took part in the program. The government collected 135 trillion rupiah in penalties, which should help it step up infrastructure spending while maintaining a budget deficit under the legal limit of 3% of GDP. David Sumual, chief economist at local lender Bank Central Asia, called the results "quite remarkable achievements."

Still, the government had been hoping for 2 million applicants. And the funds committed for repatriation reached only 147 trillion rupiah -- less than a fifth of the 1,000 trillion rupiah target. Officials said the majority of returned money is still parked in banks. This dents the government's hopes for channeling more funds into infrastructure projects before President Joko Widodo's term ends in 2019.

REPATRIATION OBSTACLES Technical and regulatory issues were cited as big obstacles to repatriation. Officials mentioned difficulties in liquidating assets like real estate. Indrawati added that some foreign jurisdictions gave Indonesian nationals intending to repatriate their money a hard time. "They had to undergo some kind of an anti-money laundering test to clarify the legality of their money," the minister said. "So the Indonesian government talked to the foreign authorities and said participation in tax amnesty means the participants have been pardoned."

Some observers also noted a lack of attractive investment instruments in the country, compared with the neighboring city-state of Singapore, where Indonesian nationals keep most of their offshore assets. Political uncertainty may have been a factor as well, in light of large protests by Muslim groups against Jakarta's Christian governor, who was accused of blasphemy.

Leo Putera Rinaldy, chief economist at local brokerage Mandiri Sekuritas, said in a note that the program's economic impact will be limited this year, since offshore asset repatriation accounted for only 1% of GDP -- lower than the expected 3%. "Follow-up reform will be the key to optimize revenue beyond 2017," he said, stressing the importance of increasing tax compliance.

Indrawati's efforts will now shift to cracking down on suspected tax evaders who did not participate.

The tax amnesty, Indonesia's first in decades, offered rates as low as 2-10% of total asset values. Officials have threatened fines as high as 200% of the amount of tax owed, should undeclared assets be discovered after the end of the program.

Banks have been told to resume submitting reports on customers' credit card use, and the government is working to remove a secrecy clause in the banking law to help pursue potential evaders.

Tax office spokesman Hestu Yoga Saksama said most people on Indonesia's richest list participated in the program. "But the question is, have those who participated reported all of their offshore assets?" he told a TV interviewer.