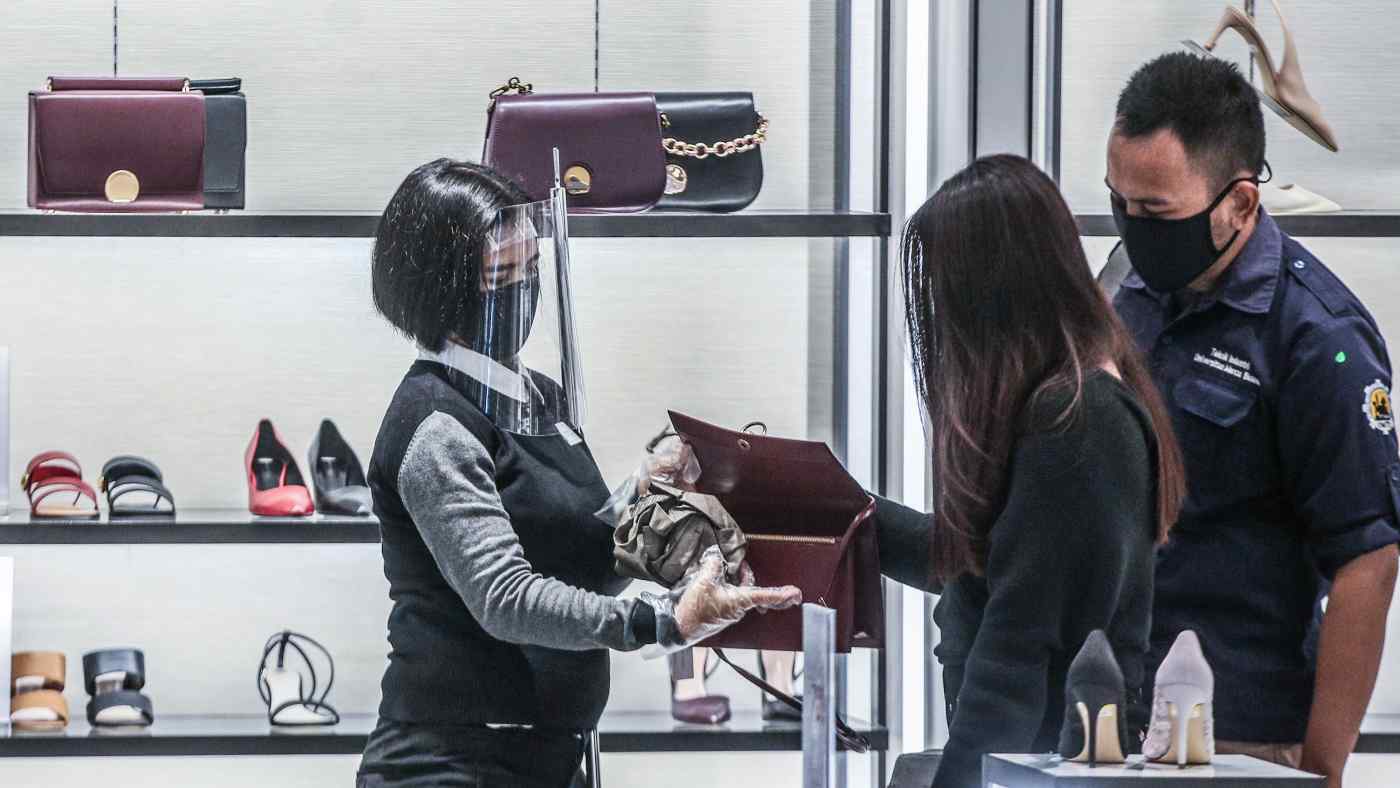 Luxury shopping in Jakarta: Indonesia is projected to see a 67% annual increase in the ranks of its superwealthy through 2025.   © Getty Images
DYLAN LOH, Nikkei staff writerFebruary 24, 2021 15:00 JST | Southeast Asia
CopyCopied

SINGAPORE -- Indonesia is projected to outpace China when it comes to the growth rate of the superwealthy set, as rollouts of COVID-19 vaccines support economic recoveries.

London-based consultancy Knight Frank's forthcoming Wealth Report 2021, to be officially released next Tuesday, shows Southeast Asia's largest economy is expected to see a 67% annual rise in the number of people becoming ultra-high-net-worth individuals over the five years through 2025. The report sets the bar at $30 million, including the value of one's primary residence.

Indonesia's 67% surge would be the sharpest not just in Asia but worldwide.

"Indonesia has always been a sleeping economic giant in Asia with its large young population and rapidly expanding middle class," Victoria Garrett, head of residential for Asia-Pacific at Knight Frank, told Nikkei Asia. "Coupled with its large domestic consumption base and emerging tech unicorns, like Gojek, there are plenty of opportunities for wealth creation within the country," she said.

India is next on the list with a projected annual growth rate of 63%, keeping Asia firmly at the top of the forecast, with Poland, Sweden, France and New Zealand taking up third through sixth spots. Mainland China is seventh, with an expected 46% increase in the ranks of the very wealthy.

Garrett said countries like Indonesia and China, with their large and growing markets, have made Asia a prominent center for wealth generation. "Over the past decade, the region has developed and deepened its technological capabilities and infrastructure rapidly, accounting for a large share of global growth in technology company revenue," she explained. "This is turn has seen wealth and business in the region grow exponentially." 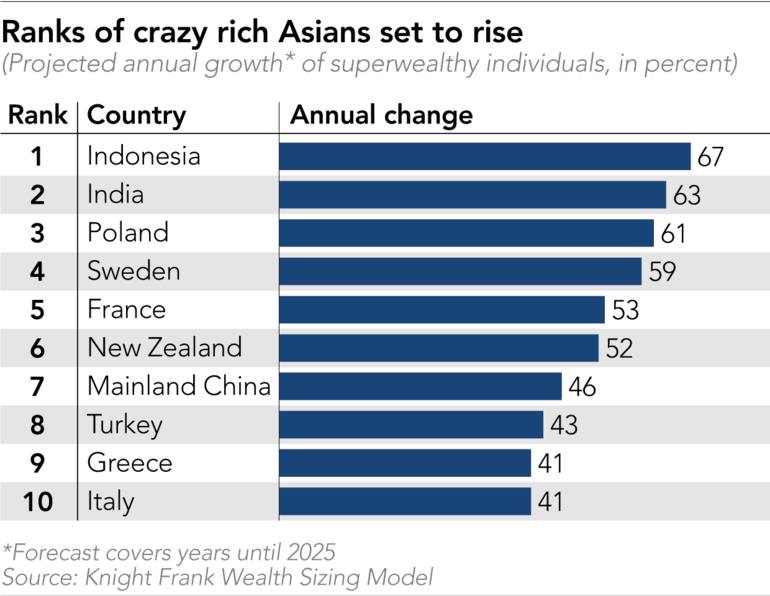 By region, Asia leads the way with 39% projected growth in ultra-high-net-worth individuals through 2025, followed by Africa at 33%. The global forecast is 27%, with the figures for North America, the Middle East, Latin America and Europe all in the 23% to 25% range.

Knight Frank noted that the Asia-Pacific is already home to more billionaires than any other region at 36% of the global total. And by 2025 it will account for nearly a quarter of the world's ultra-high-net-worth individuals.

Garrett added that while COVID slowed the world's economic momentum, the Asia-Pacific overall has adapted well to new trends and opportunities, strengthening its foothold as a wealth hub. "Now with vaccines being deployed across the globe, ultra-high-net-worth individuals in Asia-Pacific are considerably more bullish on the recovery," she observed.

After a difficult 2020, countries in the region are expected to fare better this year. Data, research and analytics provider Fitch Solutions noted in a report earlier this month that Asia's largest economies should perform relatively well.

Indonesia expects gross domestic product to grow between 4.5% and 5.5% this year, after a nearly 2.1% contraction in 2020. In January the country began a massive vaccination campaign that aims to inoculate 181 million people -- 70% of its total population -- by March 2022.

While some wallets in the country may grow fatter, uncertainty persists. "In 2021, we retain our cautious view on the pace of recovery in domestic demand," Sung Eun Jung, an economist at Oxford Economics, wrote in a report on Indonesia issued earlier this month. "The re-tightening of mobility restrictions in Java and Bali islands in January will lead to a further weakening of recovery momentum in private consumption."

Meanwhile, Southeast Asia's wealth hub Singapore forecasts GDP growth of 4% to 6% for this year, after a record 5.4% annual contraction.

A global Knight Frank survey of over 600 private bankers, wealth advisers and family offices, conducted in the previous quarter, found that over 80% of respondents in the Asia-Pacific region predicted their clients' wealth would either increase or increase significantly this year.

Garrett emphasized that with "vaccine optimism," those polled from notable markets in the region like mainland China, Singapore, South Korea and Taiwan saw a larger majority of respondents expecting wealth growth in 2021, at around 90%.

"It is also worth noting that markets struggling with the outbreak like India, Malaysia and the Philippines are also anticipating wealth growth," she said, "showing the strength and confidence in the continued growth of wealth in Asia."