JAKARTA -- Indonesia cut its growth forecast in its 2018 budget, targeting increases in spending and tax revenue that are lower than in previous years.

The targets, unveiled by President Joko Widodo on Wednesday as he announced the annual draft budget, are the latest reality check for a government that has struggled to stimulate the economy through infrastructure spending. Indonesia's budget deficit is capped by law at 3% of gross domestic product, meaning that revenue shortfalls must be made up by spending cuts. 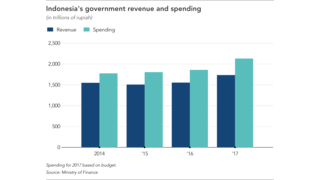 "In the midst of the global economic situation, which is not yet fully normal, the drafting of the 2018 [budget] must be done realistically, credibly and sustainably to maintain economic stability and business confidence," Widodo told the parliament. He said the budget is centered on three main goals: optimizing income, strengthening the quality of spending and managing debt.

The budget forecasts economic growth of 5.4% in 2018, slightly higher than the estimated 5.2% this year, but Widodo had targeted growth as high as 6.1% earlier this year. The proposal still needs to be approved by lawmakers, a process that usually takes several months.

The overall revenue target was set at 1,878 trillion rupiah ($140.9 billion), an 8% increase from the outlook based on the current 2017 budget. The budget was highlighted by a scant 1% rise in excise tax revenue, which mainly consists of cigarette taxes. The news sent shares of cigarette makers Hanjaya Mandala Sampoerna and Gudang Garam up by 6% and 5% respectively. 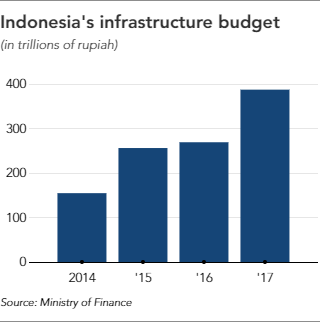 Spending was set at 2,204 trillion rupiah ($165.3 billion), a modest 5% increase from the 2017 outlook. The infrastructure budget was raised 6% to 409 trillion rupiah, a sharp slowdown from the 47% increase proposed for 2017. Still, Widodo stressed that infrastructure development is key to narrowing the wealth gap between the east and west of the country.

After taking office in October 2014, Widodo initially set ambitious revenue and spending targets to make his massive infrastructure development plans a reality. But the government suffered a major embarrassment when revenue actually fell in 2015 due to a large tax shortfall. In the wake of criticism by economists who said the overly ambitious targets dented trust among investors and creditors, the government has focused on drawing up budgets based on more realistic economic assumptions.

Bobby Nugroho in Jakarta contributed to this report.