BANGKOK -- Initial coin offerings, the hot new online crowdfunding method, differ in many ways from initial public offerings. But both pose a similar dilemma for regulators the world over: How to create rules that are not so lax as to invite fraud, but not so stringent as to chase away money. In an ICO, an investor purchases not ownership rights, as in an IPO, but "tokens" -- programs coded on a blockchain or a similar distributed digital ledger. These tokens can be used, say, to pay for an online service the issuer is developing, or they can serve as a "certificate" for a share of the profit the new business might generate after launch. 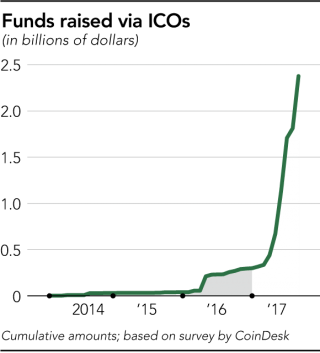 What is problematic is that some ICO-backed projects -- and even the tokens themselves -- are shams. Exacerbating matters is the existence of numerous cryptocurrency exchanges that list questionable, or even nonexistent, tokens as "new currencies," assigning them market prices and liquidity -- in other words, legitimizing them in the eyes of unsuspecting investors -- without verifying their credibility.

Aware of these dangers, some countries have banned ICO markets outright. Others explicitly warn investors of the high risks involved but allow these transactions. And some are standing back and observing how things unfold.

Belonging to the first group are the People's Bank of China and other Chinese regulators, which declared a total ban on ICOs on Sept. 4. South Korea's Financial Services Commission on Sept. 29 also announced it would ban all types of ICOs, though it did not set a date.

The U.S. Securities and Exchange Commission announced in late July that tokens issued in some types of ICOs "may be securities," which would make them "subject to the federal securities laws." In September, the SEC charged two companies with defrauding investors in a pair of ICOs for selling "unregistered securities" that turned out to be nonexistent tokens.

Though aware of the risks, the U.S. securities watchdog is hesitant to introduce blanket regulations covering all ICOs.

Also treading the middle ground are Singapore, Hong Kong and Canada, which like the U.S. have announced that ICOs may be subject to existing securities and other rules designed to protect investors. On Sept. 12, the U.K. Financial Conduct Authority warned investors to be "prepared to lose your entire stake," but stopped short of banning ICOs altogether or introducing stricter rules.

Japan is taking a looser stance. In late September, the government began requiring cryptocurrency exchanges to register with it, including naming the currencies and tokens listed on their trading boards. However, the country has no rules governing ICOs themselves, nor has it issued strong warnings targeting such transactions. Perhaps unsurprisingly, an executive at a Hong Kong cryptocurrency exchange told The Nikkei that Japan could become a leading market for ICOs.

Aware of these wide regulatory differences, companies are carefully choosing where they mount their offerings. In June, Bangkok-based OmiseGO raised $25 million in just one day through an ICO to fund a project to develop a virtual marketplace for loyalty-program points. It chose Singapore because the city-state's lack of regulations at the time appeared to present the lowest legal risk, according to Vansa Chatikavanij, the company's managing director.

Cryptocurrency news provider CoinDesk estimates that global ICOs raised more than $2.2 billion in the first nine months of 2017, a gigantic leap from the $295 million for the three years through 2016. Still, it is only a fraction of the $289 billion in venture capital pumped into startups during the same nine months, according to a joint report by consultancies PwC and CP Insights, and the $127 billion that EY says was raised through IPOs.

The ultra-easy money policy embraced by the developed world has created a huge pool of cash that is seeking higher investment returns, often through novel means. The same dynamic gave rise to the junk-bond, dot-com and subprime bubbles. As long as speculative money is abundant and regulations leave an opening, ICOs will continue to find a welcome home.