TOKYO Apart from the solar panels on the roof, Hisao Yamashita's home in Yokohama, south of Tokyo, looks much like the houses around it. What makes it special is what's inside.

A fuel cell provides hot water quickly and efficiently, sunlight streams in through highly insulating, double-glazed window panes. All the lamps in the house use energy-saving light-emitting diodes, and the walls are packed with high-performance insulation. To top it off, an efficient air-conditioning system keeps room temperatures at comfortable levels.

"Zero-energy" homes like this are starting to catch on in Japan, particularly as the country faces stricter emissions reduction targets in line with the Paris Agreement, a U.N. climate accord reached late last year. The Japanese government is hoping these energy-efficient homes really take off by 2020.

At his house, Yamashita checks a terminal connected to a home energy management system, or HEMS, to see how much electricity his rooftop solar panels are generating. 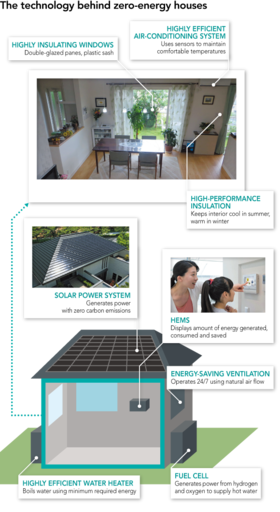 The terminal provides him with various information about his home. It tells him, for instance, that his house has essentially kept 255 liters of kerosene from being burned to generate electricity.

Yamashita hasn't had to sacrifice comfort for energy efficiency. "Even though I rarely turn on the air conditioner during the summer or winter, it's still comfortable," Yamashita said, a testament to how efficient the insulation is.

Living in a zero-energy house is also something of a revenue stream. Last year, Yamashita generated a net surplus of electricity worth 70,000 yen ($683), thanks to the system.

According to criteria laid out by Japan's Ministry of Economy, Trade and Industry, in order to be dubbed zero-energy, a house must: Residential solar panels are catching on in Japan.

Since the oil shock of 1973, energy consumption in Japan has fallen by 20% in industry but doubled for household use. Although electric appliances have become increasingly energy-efficient, the number of devices per household has grown, as has the number of households.

The government has been doling out subsidies worth 1.25 million yen to each household wishing to build a zero-energy home in the current fiscal year. Two years ago, when Yamashita built his home, he received subsidies from the central and prefectural governments and managed to save 2 million yen.

Kenichi Ishida, a managing officer at Sekisui House, the builder that put up Yamashita's home, said zero-energy homes "can reduce energy use to zero without compromising on comfort." The company reckons its zero-energy homes can reduce power usage by 40-50% compared with most homes today and that the sun can supply all the energy they need. Of all the new custom-built homes the company constructed in fiscal 2015, over 70% were zero-energy.

The popularity of these homes looks set to grow, but the current boom owes much to the government subsidies. For more such houses to be built, costs must come down, especially those associated with all the energy-saving equipment and materials.

Once prices do come down and it becomes easier for homebuyers to recoup their initial outlays, and once energy management systems open people's eyes to how much lower their utility bills can be, more people will likely take the zero-energy option.