Only a third of the Clark Green City 9,540-hectare economic zone will be developed for residences and business, and the rest left to green cover.

MANILA -- Frustrated by the capital's flawed urban planning, the Philippine government is looking for investors to fund an entirely new city.

Some 600 delegates from more than 100 entities attended a conference on Tuesday for Clark Green City, a 9,540-hectare economic zone located about 80km north of Manila.

The Bases Conversion and Development Authority (BCDA), the agency in charge, is touting the project as the "first smart and disaster-resilient green city" in the Philippines. A third of the site will be a business and residential hub, and the rest given over to green cover, said Chief Executive Arnel Casanova.

"We want to bring urban planning and sustainable development right to the forefront," Casanova told the Nikkei Asian Review. "We have a lot of challenges in Manila brought about by lack of planning." 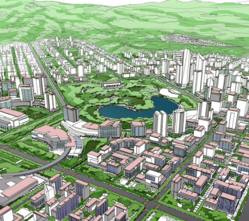 Indeed, many blame Metropolitan Manila's traffic gridlock on an absence of urban planning. Exacerbated by rising car sales in a booming economy, the mobility of the capital's 12 million citizens has been crippled. The Japan International Cooperation Agency has calculated the cost of Manila's traffic at 2.4 billion pesos ($51.2 million) per day, a figure that could more than double in the next 15 years if the jams remain.

With development planned over the next 40 years, Clark Green City will have 1.12 million residents and give employment to 800,000 people, generating about 2 trillion pesos in annual economic activity when fully developed.

Casanova believes the city may have special appeal to businesses wanting backup offices. The mountains surrounding the city should buffer typhoons, and the elevation makes it less prone to flooding than Manila. The development also has good gateways nearby at the Port of Subic Bay and Clark International Airport, both of which have been developed around former U.S. military bases. Expressways connect the city with the capital and key central provinces.

Among incentives, BCDA is offering flat 5% gross income tax with exemption from all other taxes, duty-free importation of equipment and raw materials, free movement of finished goods within the economic zone, and visas for investors.

There is already particular interest from Japan. On Tuesday, the BCDA and the Japan Overseas Infrastructure Investment Corporation for Transport and Urban Development (JOIN) formed a joint venture to develop a project master plan.

Casanova sees a good fit with the Philippines given Japan's shrinking domestic economy and aging population, and points to the number of young Filipinos. "They need the human capital from the Philippines," he said.

Hatano said the industrial zone should attract Japanese investors, and that the rail project connecting the city to the capital will stimulate real estate development. Slow payback times would, however, be a discouragement.