DUBAI, United Arab Emirates -- Fierce battles continue to rage between Iraqi forces and the Islamic State militia in northern Iraq. As the conflict has yet to spill over into the country's south, where a number of large oil fields are concentrated, international crude oil prices remain relatively stable. The prospects for a drawn-out war, however, mean that it is increasingly unclear whether Iraqi Prime Minister Nouri al-Maliki and his government will be able to ramp up oil production to repair the country's shattered economy.

In June, the International Energy Agency warned, in its Medium-Term Market Report 2014, that rising sectarian strife raises risks for crude oil production. It projects that Iraq, which has the world's 5th largest crude oil reserve, will produce 4.54 million barrels a day by 2019, down nearly 10% from its estimate a year earlier.

Meanwhile, the Islamic State group, or ISIS, seized control of the northern Iraqi city of Mosul on June 10. They also attacked the country's largest oil refinery in Baiji, south of Mosul. The forces have since been locked in a battle with government troops.

According to the U.S. Department of Energy, the Baiji oil refinery accounts for about 30% of Iraq's refining capacity. Despite the Islamist group's attacks, crude oil markets have recovered stability due to the fact that the bulk of Iraq's oil exports come from its southern area, far removed from ISIS's main battleground.

Pipelines for exporting crude oil from northern Iraq to Turkey have already been shut down due to a string of attacks since March. In light of Iraq's current crude oil output, many observers think that the fighting in the north will not affect oil export volumes for the short term.

Kirkuk in northern Iraq has an abundance of oil reserves, and the Kurdish autonomous government's militia unit now protects the area following the retreat of the Iraqi army.

However, the crude oil market will become volatile if conflict spreads to the nation's south and disrupts facilities run by Japanese, U.S. and European companies.

The al-Maliki administration, formed in 2006, has lured foreign operations to develop oilfields in southern Iraq in a bid to boost crude oil production. A number of foreign oil and energy companies, including Britain's BP, U.S.-based Exxon Mobil, Russia's Lukoil and China National Petroleum Corporation have operations there. In 2013, Japan Petroleum Exploration launched oil production at Garraf. Thanks to such undertakings, Iraq's crude oil output totaled 3.6 million barrels a day in February this year, temporarily recovering to the highest level since 1979, when former President Saddam Hussein came to power. 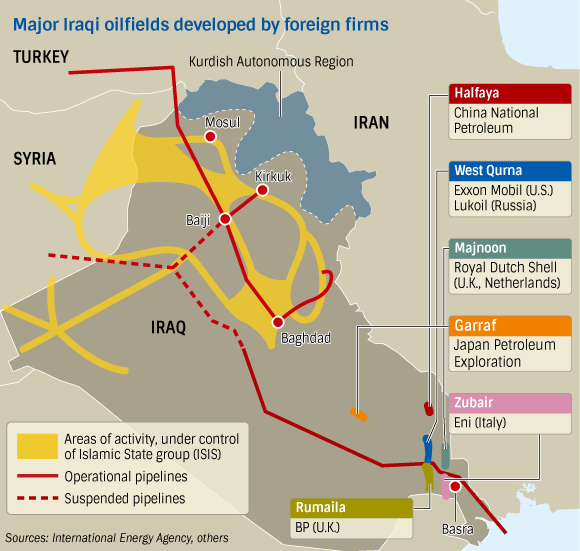 Revenue from crude oil exports is used by Iraq to support investment in the country's social infrastructure, which has been severely damaged by a series of wars and invasions. The International Monetary Fund estimated in April that Iraq's gross domestic product would grow at around 9% a year between 2017 and 2019. But for now, suspension of the pipeline supplying Turkey reduced the crude oil output to 3.37 million barrels a day in May.

Speaking to U.S. media in June, Iraq's Oil Minister Abdul-Kareem Luaibi Bahedh said that crude oil exports will increase and that the current conflict will not have a negative impact. Despite these reassurances, the conflict has alarmed foreign oil companies operating in southern Iraq, with some sending employees away from the country in anticipation of prolonged violence.

Moreover, concerns are growing that foreign investment in Iraqi oil development will slow even if fighting against the radical Islamists ends. This is because the ongoing strife has yet again raised the complex nature of sectarian and inter-ethnic issues within Iraqi society.

As long as the risk of unforeseeable conflict remains present, foreign oil companies must remain cautious about further investments in Iraq. But the longer the government delays its response, the more pressure to boost oil production will increase. This may in turn raise the possibility of government efforts to rebuild the war-torn country being derailed.