JAKARTA/BANGKOK/MANILA -- The Asian capitals of Jakarta and Bangkok have the dubious distinction of being among the fastest sinking cities in the world, as residents of both are faced with rising sea levels and extreme flooding, especially during annual rainy seasons and torrential rain falls.

Indonesia's low-lying capital, home to 10 million people, sits at the mouth of the Ciliwung River and has a long history of flooding: In 2007, 70% of the city was submerged by floods. It is the fastest sinking city in the world, dropping about 7.5 cm to 10 cm every year, according to Dutch research institute Deltares.

The problem is exacerbated by heavy rain, delays in developing water and sewage systems, and excessive groundwater pumping, according to the Japan International Cooperation Agency, the international developmental arm of the Japanese government.

According to a senior official of Indonesia's Ministry of Public Works and Public Housing, the election of an opposition politician as governor of Jakarta has stalled plans for a new sea wall.

With the city sinking and few options available, President Joko Widodo on Aug. 26 announced the relocation of the capital Jakarta altogether, citing concerns over the sinking, as well as worsening floods, pollution and congestion.

"Why the urgency now?" he asked in a live TV broadcast. "Because we cannot let Jakarta and Java continue to be increasingly burdened by a rising population, severe traffic jams and air and water pollution."

The new capital will lie between the cities of Samarinda and Balikpapan in East Kalimantan Province on the island of Borneo. The move will cost an estimated 466 trillion rupiah ($32.74 billion), and see about 1 million people relocate. 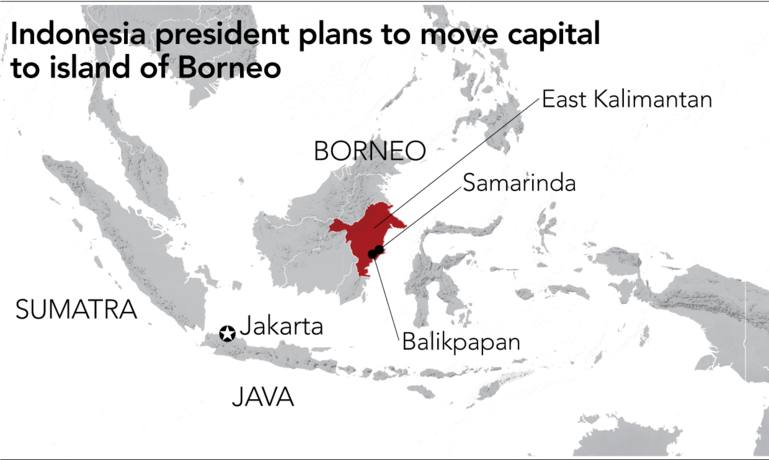 Bangkok, built over a swamp just 1.5 meters above sea level, is also sinking at about 2 cm per year, according to JICA.

An estimated 40% of the city will be under water by 2030 if nothing is done to halt land subsidence, the Deltares report noted.

In 2011, the Chao Phraya River, which flows through Bangkok into the Gulf of Thailand, overran its banks and swamped 40% of the city. Industrial parks in central Thailand and in northern Bangkok were underwater for extended periods, causing an economic loss of nearly $47.21 billion.

JICA has recommended that Bangkok construct discharge channels to alleviate flooding, but rapid changes of government in recent years have stalled progress. The first of the city's two major discharge channels is now expected to be completed by 2025.

Delayed construction of water infrastructure projects has been a major barrier to development in other emerging Asian economies. In the Philippines, 70% of 170 anti-flooding projects for flood-prone Manila -- originally set for completion by 2018 -- have yet to be finished. About 40% have not even started, said people familiar with the matter.