TOKYO -- Japan's Financial Services Agency will conduct a survey to determine whether regional banks and other lenders are extending excessive credit to real estate investors, Nikkei has learned.

The FSA fears that another asset bubble could damage the country's financial system. It plans to look more closely at lenders' credit screening practices to nip any excessive price rises in the bud. It will conduct on-site inspections of lenders, depending on survey findings.

Earlier in September, an independent investigative panel published a report that found widespread improper lending practices at Suruga Bank, a regional bank based in Numazu, 130 km southwest of Tokyo. Many industry watchers believe Suruga Bank is the tip of the iceberg.

Although the report spurred FSA to move forward with the survey, the agency has been monitoring loans for construction of rental housing for several years. Wealthy people often invest in such properties to avoid Japan's high inheritance taxes.

There has been an uptick in construction of rental housing in areas where demand is weak, and cases of lower-than-expected leasing income due to high vacancy rates. Foreclosures are also on the rise.

This year, the FSA is keeping a close eye on both lending to those seeking tax shelters and to salaried workers and others who lack the cash or collateral to carry heavy debts. 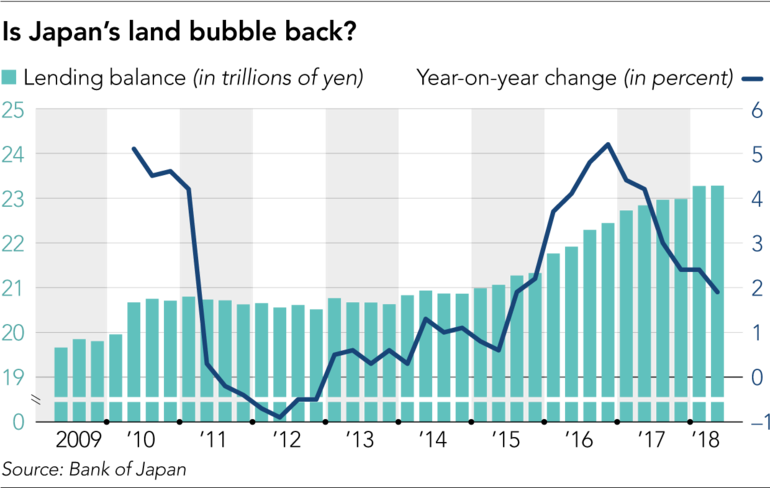 The survey will look at whether banks offer credit based on a proper assessment of borrowers' creditworthiness, and pay sufficient attention to the rental income that properties produce.

Loans to individuals can reach hundreds of millions of yen (millions of dollars) because borrowers often rely wholly on credit to finance the purchase of land and housing. When borrowers cannot service their debts due to a rise in vacancies, they must make up the shortfall using other income or by selling assets.

The FSA will also examine whether banks accurately appraise the value of loan collateral. If bank appraisals of assets used as collateral are too high, for example, they will be unable to recover their money if a borrower defaults, raising the risk of bad debts hurting their balance sheets.

Although the FSA will not seek a common standard for asset appraisals, it will look at valuation methods. Suruga Bank got into trouble by extending major financing to investors who took out loans for women-only housing. Borrowers found it hard to repay their debts when a company hired to manage the properties collapsed. The borrowers were unable to clear their debts by selling the properties, which they bought at above-market prices.

The FSA fears there may be many instances of poor credit screening for rental properties, raising the specter of nonperforming loans hurting Japan's financial system.

The outstanding balance of loans for investment in rental housing in Japan totals nearly 23 trillion yen ($203 billion), up 20% from 2009. Regional banks hold more than 60% of the total.

These lenders are under pressure from razor-thin interest rate margins and shrinking customer bases. Many banks based in areas with weak economies are thought to have followed Suruga's lead, lending aggressively to property developers in the Tokyo metropolitan area and other cities.