TOKYO   Japanese Prime Minister Shinzo Abe was in a good mood on the evening of Jan. 19. Sipping red wine at his official residence, he told his dinner guests the news of the day: Tourist arrivals to Japan had surged 47% in 2015 to a record 19.7 million. Driving the growth was a 107% jump in Chinese arrivals.

"We've got to expand hotel capacity to bring in more visitors," Abe said. "There's such a shortage of rooms that even APA hotels are expensive," he said, referring to a nationwide chain of no-frills business hotels.

Inbound tourism to Japan has been a shining star in the otherwise unspectacular Abenomics show. Last year's 5 million Chinese visitors spent some 1.41 trillion yen ($12 billion) in the country, according to the Japan National Tourism Organization, as a weaker yen and broader duty-free exemptions opened wallets wide. Half of Chinese visitors' spending went to shopping.

WHALE OF A TIME   Japanese department stores and other retailers are crossing their fingers that the jump in Chinese arrivals and spending will continue through the Lunar New Year holiday season this month despite the weakening yuan and slowing Chinese economy. Indeed, an official with China Travel Service said holiday bookings to Japan were up 10-20% from last year's holiday. 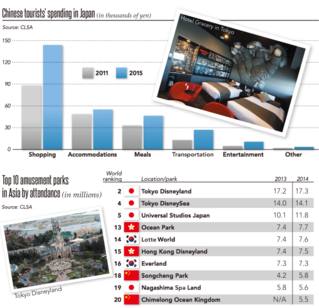 But while shopping remains high on the list of many Chinese travelers, the word from recent Japan-bound tourists is that "experiences," not baubles, are what they are after. Overseas-bound holiday travelers this year budgeted only around 3,000 yuan ($456) each for shopping, according to travel agent CYTS Tours Guangdong Railway.

"Watching a whale up close is a once-in-a-lifetime opportunity," Wang Yuechu, a 24-year-old elementary school teacher, said excitedly as she left Shanghai for southern Japan's Okinawa Prefecture to take a boat tour to look for humpback whales. Her first visit to Japan, in 2014, was a whirlwind eight-day guided tour of major cities with an emphasis on shopping.

"I'm not interested in shopping," she said. "I want to enjoy nature. I didn't know you could see whales in Japan. I had to bring my [three] friends."

Wang Lili, a 31-year-old nursery school teacher from the northeastern city of Dalian, expressed similar feelings ahead of her trip to the Kyushu region, in southern Japan. "I can't wait to see Mount Aso," she said. "We don't have many volcanoes in China." Trying the famous wagyu beef of Miyazaki was also high on her to-do list.

Social media is playing a key role in shaping the shifting preferences of Chinese travelers. "The mentality of Shanghai tourists is becoming close to that of seasoned travelers from Hong Kong and Taiwan," said Kenji Haraguchi, chief of the Japan National Tourism Organization's Shanghai office. Kenji Shimizu, senior director for Northeast Asia strategy at the Japan External Trade Organization, also sees change afoot: "Many of the future [Chinese] visitors to Japan will be second- or third-time repeaters. They won't be buying trunkloads of presents for relatives anymore."

South Korea is also keeping an anxious eye on Chinese holiday arrivals. Such tourists now make up 45% of incoming visitors, totaling 5.98 million arrivals last year. But the land of K-pop and cosmetics suffered from an outbreak of Middle East respiratory syndrome last year, contributing to a 2.3% slip in Chinese visitors.

The typical Chinese tourist in South Korea is under 35, female and still comes primarily to shop, according to the Korea Institute for Industrial Economics and Trade. KDB Daewoo Securities said in a recent report that Chinese tourists spend twice as much on their South Korean sojourns than they do in Southeast Asia.

Spending by Chinese travelers has driven up sales of local cosmetics makers such as LG Household & Health Care and AmorePacific Group. Helping fuel that rise is the popularity of South Korean TV shows and movies, which has made the country's cosmetics and fashions attractive in China.

High-end department stores such as Lotte, Shinsegae and Hyundai are among the major beneficiaries of the shopping fever. Shinsegae group in November won the hotly contested rights to open a new duty-free shop in downtown Seoul. The planned 23,200-sq.-meter outlet in the central district of Myeongdong, which will break Lotte Duty Free's lock on the neighborhood, will aim for annual sales of 1.5 trillion won ($1.25 billion). Licenses for four new duty-free outlets in Seoul and on Jeju Island, the country's second-most popular destination for Chinese visitors, were also awarded in July, the first in 15 years.

BAND-AIDS, NOT HANDBAGS   But the fever may soon break. The weaker yuan is making electronics and luxury bags and watches in Japan and South Korea more expensive for Chinese tourists. If they do keep shopping, it will be less to hunt for bargains than to find everyday household goods that offer good quality.

Kobayashi Pharmaceutical's Medi-Shield Liquid Bandage is one such product. Ever since it was touted as a "must-buy" medical item on Chinese social media, the bandage, which forms a superthin transparent film to patch up cuts, has flown off the shelves. Overall sales in the nine months through December were 112% higher than a year before, which the company attributed to Chinese demand.

For Chinese New Year, Kobayashi has assigned staff to monitor real-time sales and coordinate extra store deliveries. In surveys, Kobayashi found that 60% of its Chinese customers use the product at least once a week.

Despite all the money Chinese tourists spend overseas, a recent survey by Hong Kong-based brokerage CLSA found that only 14% of respondents cited shopping as the top factor affecting their choice of travel destination. Instead, three-quarters cited safety. That is perhaps understandable given that the poll was conducted after a string of terror attacks around the world last year and the disappearance of a Malaysia Airlines flight carrying around 150 Chinese passengers.

Travel cost was the second-most important factor, followed by "sights and culture." "The shift in emphasis among Chinese travelers is clear," said CLSA's analysts. "These tourists are spending more on experiences, accommodation and transport and less on shopping." We're not in Hangzhou anymore: This owl cafe in Tokyo is a popular stop for Chinese tourists. (Photo by Masaru Shioyama)

For travelers seeking unique experiences, Tokyo's famed animal cafes are a popular draw. In the Tsukishima neighborhood, for example, one cafe lets customers take photos with its collection of 20 owls. Video game aficionados, meanwhile, can make a pilgrimage to the Japanese capital's Akihabara electronics district, where such retro game stores as Super Potato await them.

A must-visit destination for many millennials is The Wizarding World of Harry Potter at Universal Studios Japan in Osaka. A photo of a tourist waving a magic wand while cradling a Butterbeer is sure to garner lots of "likes" on social media.

Then there's the snow country. Skiing, snowboarding and soaking in onsen hot springs in wintertime mountain retreats is another favorite of younger Chinese travelers. Hoshino Resorts Tomamu, a ski resort on the northern island of Hokkaido, is expecting an influx of Chinese tourists following its purchase by Chinese conglomerate Fosun Group.

ONE-HIT WONDER?   In South Korea, there is growing concern about a lack of repeat Chinese visitors; returnees accounted for only 11.6% of arrivals in 2014, according to the Korea Economic Research Institute.

One reason could be that Chinese visitors ranked South Korea 14th out of 16 destination countries in terms of satisfaction, according to the Korea Culture and Tourism Institute. Only a quarter of those surveyed said they would return. Another troubling sign is that the length of visits by Chinese tourists to South Korea fell from an average of 10 days in 2012 to less than six last year.

This drop-off may reflect the tendency for Chinese tourists to come on cheap package tours arranged by local operators. These frequently come with high-pressure stops at overpriced shops. Although the number of young, independent Chinese travelers is increasing, "the local tourism industry sticks to low-cost, low-quality travel packages," said the Korea Economic Research Institute. "This practice only makes Chinese tourists lose interest in Korea. New tourism content for young Chinese tourists to enjoy should be developed."

Ocean cruises are a relatively new channel bringing Chinese visitors to South Korea and Japan. Chinese now account for nearly 90% of cruise arrivals in South Korea, with most landing at the port of Incheon or the resort island of Jeju.

Competition over the much-coveted Chinese tourist is only intensifying. European cities are trying to lure visitors with whiskey tours, golfing holidays and fashion shows. As for which formula will prove more successful in tapping China's travel revolution, perhaps that is a question to mull over a Butterbeer.

Nikkei staff writers Daisuke Harashima in Dalian and Yu Nakamura in Guangzhou, and contributing writer John Burton in Seoul contributed to this report.