Thai tourists to Japan topped 1 million in 2018, while their Vietnamese and Filipino counterparts also came over in large numbers. What is even better for Japan's economy is that many of these travelers ended up in stores, where they were not shy about spending.

And history shows this windfall could be about to start really gushing.

In the coming years, more Southeast Asian countries will reach a level of economic development that will leave their citizens with enough discretionary income to start indulging their travel fantasies. As more Southeast Asians take to the sky, they will go a long way toward helping Japan reach its goal of boosting the number of foreign tourists to 60 million by 2030.

"I have been to Japan twice with a friend of mine," said a Thai woman in her 20s who works in Bangkok. "The quality of cosmetics and food was very high, and the streets were clean."

She showed off a smartphone photo taken in front of a Tokyo drugstore and said she is thinking of visiting Japan again.

According to the Japan National Tourism Organization, the number of tourists from Thailand reached 1.13 million in 2018. Thais thus joined South Koreans, Taiwanese, Chinese, Hong-Kongers and Americans in breaking through the 1 million threshold. 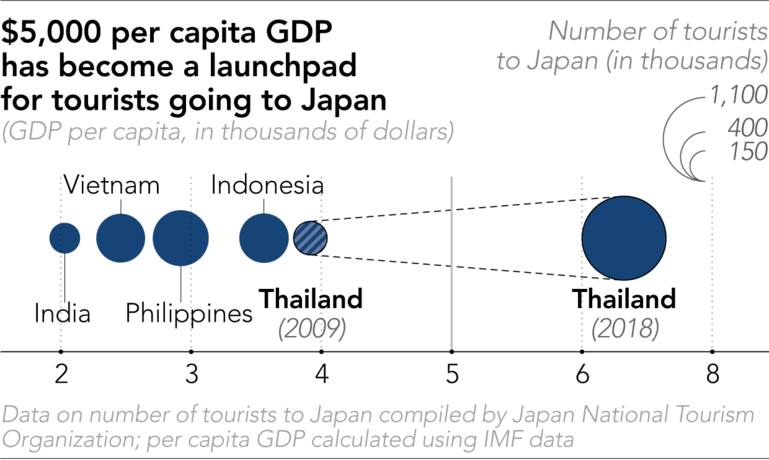 While visitors from China, South Korea, Taiwan and Hong Kong accounted for 73% of the total number of foreign arrivals, those from Southeast Asian nations increased at steep rates from the previous year -- 26% for Vietnamese and 19% for Filipinos.

Outbound tourism from a country takes a leap when its per capita gross domestic product vaults over the $5,000 a year threshold, according to a report by Mizuho Bank.

Consider China. In 2011 it rushed by the $5,000 marker, and in the following seven years the number of Chinese outbound tourists increased eightfold, well above the 70% growth from 2004-2011.

Now take a look at Thailand, whose GDP rose above $5,000 per capita in 2010. While the number of Thai visitors to Japan had hovered around 100,000 per year in the six years through 2009, it exceeded 1 million in less than 10 years after 2010. (Thais wanting to holiday in Japan had another barrier removed in 2013, when Japan began waiving strict visa requirements.)

In the coming decade, three other Southeast Asian nations are expected to either join Thailand and Singapore in the $5,000 per capita promised land or at least approach the border.

So expect the region's airports and budget airlines to be exponentially busier in the 2020s.

No-frills carriers already control a large share of Southeast Asia's aviation market, and many, like the AirAsia Group out of Malaysia, frequently fly to Japan. While some 25% of all foreign tourists who visited Japan in the January-September period of 2016 used budget airlines, the ratio topped 50% for Filipinos and 30% for Thais and Malaysians, the Japan Tourism Agency said.

These airlines, as well as geographical proximity, are already fueling the Japan-bound travel boom. And they are goosing the country's economy. In the first three months of this year, tourists from Vietnam spent an average 54,000 yen ($498.33) in Japanese stores, second only to Chinese visitors, who dropped more than 100,000 yen while in the country, according to the JTA.

While spending by all foreign tourists in the quarter slowed around 3% from the year-earlier period, Vietnamese tourists handed over 22% more.

Thai tourist spending in Japan came to 40,000 yen or so, while Indonesians and Filipinos were at the 30,000-yen level.

An interesting contrast: American and European tourists, who enjoy much higher incomes, spend about 20,000 yen shopping while in Japan.

At play here is the quality and availability of goods. Americans and Europeans can buy well-made electronics and cosmetics at home, but Southeast Asians feel an urgency to stock up on these items while in Japan.

Reina Kanai of Aun Consulting, a Tokyo-based research company, said Japanese retailers have a big opportunity to corral even more Southeast Asian tourists. She says merchants should engage with these visitors on "social networking sites."

Southeast Asians are especially fond of social networks, spending hours a day on them, and the Japan National Tourism Organization already operates Facebook and Instagram accounts that serve as digital travel brochures.