Regular folks cling to cash, despite a government push for e-payments TOKYO -- Japanese Prime Minister Shinzo Abe wants more people to make smartphone-based mobile payments in his country, like they do in China. But many regular Japanese are not so keen.

Efficient, multi-tasking ATMs seem to be around almost every corner in Japan, making cash the most convenient means of daily transactions. And if there are no ATMs around, banks seem ready to bring one to your area.

So with the 50th anniversary of the invention of the ATM this year, neither banks nor ATM manufacturers are showing signs of giving up on them. 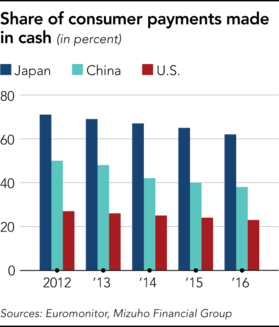 In June, Bank of Kyoto rolled out a mobile ATM mounted on the back of a truck that visits sporting events, residential and shopping complexes.

Later this year, a more compact, van-mounted ATM will be released by Oki Electric Industry for smaller regional lenders, with Shimane Shinkin Bank the first to place an order. Oki believes it can sell 1,000 units in three years.

Convenience stores are becoming a "second wallet" for some, said an Oki spokesman, as customers use them to withdraw small amounts of money so they won't overspend.

The ATM is a way to draw more shoppers into convenience stores, where they can personally interact with staff.

"Cash helps consumers to stay within budget in their daily, weekly and monthly spending," the U.S.-based ATM Industry Association says.

"Cash is both the most popular payment method worldwide, accounting for over 75% of all retail payments today, and is a store of value trusted by humanity," said the association's chief executive, Michael Lee. "In addition, it is the No. 1 back-up plan when electronic systems go down."

Toward a cashless society

Japan, however, wants its people to make greater use of digital payments. This desire may stem in part from the central bank's frustration over the "flight to cash" that happened last year in response the introduction of negative interest rates on deposits, effectively negating the effects of the policy.

More recently, however, there are concerns about the emergence of China as a digital payment superpower, putting it in a strong position to be the dominant service provider in Asia.

Alibaba is trying to expand its payment infrastructure across Asia, including in South Korea, Thailand, Indonesia and India. It is looking to enter the Japanese market next year.

"Black ships are coming," warned Daisuke Yamada, a senior executive at Mizuho Bank, comparing Alibaba to U.S. warships that forced feudal Japan to open up to international trade in 1853.

To consumers, it matters little who provides e-payment services -- Japanese or Chinese companies. But it matters enormously to financial institutions. At stake is access to information about customers and their spending and financial data, which can be mined for marketing and product development purposes. Online retailer Amazon is an example of how a gatekeeper of online transactions can create new services in retail, entertainment and finance.

Japan may be behind other global players in the collection of Internet data, but starting late is better than never, Yamada says, calling the development of a digital payment environment "a must."

In Japan, 62 percent of consumer payments are made in cash, compared with 38 percent in China, and 23 percent in the U.S., according to Euromonitor. The Japanese attachment to cash is clear in the doubling of the amount of cash in circulation over the last three decades, to 20 percent as share of gross domestic product. In other advanced economies, the share has stayed roughly flat at around 5-10 percent.

Prime Minister Abe has set a goal of doubling the share of digital payments -- including those involving credit cards, stored value cards and smartphones -- from 18 percent to 40 percent within 10 years.

Nomura Research Institute predicts that e-payments will grow, but only gradually, leaving Japan well behind the front-running cashless societies such as Sweden.

Nomura analysts argue that drastic measures might be needed to break set consumer ways. One possibility is to introduce a penalty for using cash. Public transport systems could give discounts only to those who pay electronically, for instance. 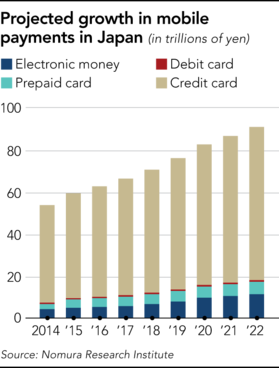 Others call for steps to improve the usability of e-payments. Currently, there are multiple systems and schemes for e-payments that are not harmonized, requiring customers to have different stored-value cards or smartphone apps for different retailers. Mizuho Bank's Yamada proposes combining all the different platforms to create a single e-payment system that could be used in shop in Japan both online or offline.

Meanwhile, ATM industry officials quietly believe the need for cash will never disappear -- even in China.

They point to the proliferation of online scams involving e-payments, as well as to people's wariness about being digitally watched by big Internet companies.

"We support the peaceful co-existence of cash and cashless payments so there is maximum choice and convenience for all citizens," said the ATM Industry Association's Lee.