Japan getting a grip on grim reality

TOKYO -- After some squabbling, the government and the ruling Liberal Democratic Party have agreed to work toward keeping annual increases in social security-related expenditure at around 500 billion yen ($4.02 billion). 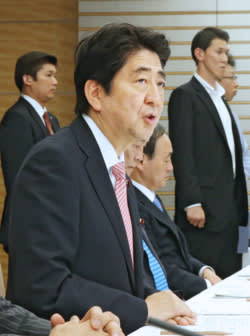 The Council on Economic and Fiscal Policy's draft plan for restoring fiscal health calls for annual increases in social security-related expenditure to be kept at 500 billion yen or less.

Japan's government is aiming to stop shifting an increasingly larger debt burden onto the young.

The social welfare budget was the biggest sticking point in the government of Prime Minister Shinzo Abe's blueprint for rehabilitating fiscal health by fiscal 2020, which ends March 31, 2021.

"We are not looking to write a fairy tale where we count on economic growth that may or may not come and pray to god that the government can somehow achieve a surplus in the primary balance with some windfalls," Tomomi Inada, chief of the LDP's Policy Research Council, said June 12.

During a news conference four days later, Akira Amari, economic and fiscal policy minister, countered Inada. "Once the economy grows, tax revenue will increase, and we will be able to reduce expenditure cuts as well," Amari said. "Lowering expenditure could lead to the worst-case scenario, where the economy slows down and makes it impossible for us to raise the consumption tax."

The standoff between the government and the LDP came to the fore this month. The Council on Economic and Fiscal Policy, which answers directly to the prime minister, leaned toward boosting tax revenue by helping the economy achieve high nominal growth. The LDP, traditionally a big spending party, was now opposing the government by calling for it to adopt numerical targets on expenditure cuts.

At the power center of the Abe administration, everyone agrees that the government should stick with the promise of bringing back a primary balance surplus by fiscal 2020. Because the prime minister pledged not to increase the consumption tax beyond 10% under his watch, natural increases in tax revenue and spending cuts are the two remaining cards on the table for rehabilitating fiscal health.

Amari runs the Council on Economic and Fiscal Policy. It insists that tax revenue can increase dramatically through the government's economic growth strategy. The council argues that the government should not set tough spending ceilings from fiscal 2016 to fiscal 2018. That way, the argument goes, the planned consumption tax hike to 10% in April 2017 will not stall the economy.

The council also set an interim goal of bringing down the primary balance deficit to the equivalent of around 1% of Japan's gross domestic product by fiscal 2018. The proposal, which also comes with a suggestion to reevaluate the goal in fiscal 2018, received the support of the prime minister.

Taro Aso's Ministry of Finance, however, was critical of the proposal. It says a primary balance that references GDP alone cannot be used to guide budget formation. Aso doubles as finance minister and deputy prime minister.

Inada and LDP's special mission committee on fiscal reform she runs weighed in on the debate. "The current government achieved economic growth while carrying out fiscal reform in the past three years," Inada said. "It is strange that the same government is now saying it cannot be continued."

"Arguments for counting on uncertain tax revenue increases, or deferring expenditure cuts, are basically an abdication of responsibility," the committee wrote in its final report on June 12.

The committee demanded that the government maintain its basic policy of the past three years for the near future. This means capping increases in social welfare-related spending at 500 billion yen a year, an amount that is seen absolutely necessary to simply keep up with the growing ranks of elderly people. Other expenditures, including public works, must be left unchanged.

As the gap between Amari's team and Inada's did not seem to narrow, Abe had to step in. The prime minister was in a meeting with high-ranking officials of the Japan Association of Corporate Executives on June 15 when his cellphone rang. He excused himself from the meeting for a while. "Well, it was finally sorted out somehow," he said upon return.

The draft plan, released Monday, calls for the total increase in discretionary expenditure to be kept at 1.6 trillion yen for the next three years. It also included rough guideposts to be used for keeping an eye on economic and consumer price trends. The lion's share of the 1.6 trillion yen, 500 billion yen a year, goes to social security spending. The rest will cover necessities that may emerge during the budget formation process.

If left unchecked, social security-related expenditure would increase about 1 trillion yen a year. Abe's government has been able to keep it at roughly 500 billion yen because it lowered payments to nursing-care providers, raised health insurance copayment and introduced other social security reform measures. The economic recovery also helped because the payment of welfare and unemployment benefits did not increase.

Would 500 billion yen be a tough cap to adhere to? It is a difficult question to answer. With a 10% consumption tax, 3% nominal economic growth would raise tax revenue by 500 billion yen, matching the annual increase cap on social welfare spending.

As long as primary balance deficit continues, however, new government bonds will have to be issued to cover discretionary spending. This means the burden of government debt will continue to be swept under the rug for future generations to deal with. But keeping the annual increase in social security spending at 500 billion yen or less would somewhat help to ease the pain.

If the government allows the social security budget to keep growing by 1 trillion yen a year, Japan faces a financial crisis by the 2040s even if the consumption tax rate is raised to 25%, according to Ryutaro Kono, chief economist at BNP Paribas Securities (Japan), and others. Under that scenario, the outstanding amount of government bonds would exceed the total net value of private-sector financial assets by then.

If social security budget growth is halved to 500 billion yen, the chance of avoiding a financial crisis over the long-term would increase with consumption tax at 20%, Kono and others contend.

"If the government manages to halve the social security expenditure increase and raise the consumption tax rate to 15% sooner rather than later, options for revitalizing fiscal health would improve considerably," Kono said.