Chairman Masayuki Okano of hypodermic needle maker Okano Kogyo says his business, though in the black, will close after he retires because he has no successor.
TAKASHI TSUJI, Nikkei staff writerOctober 9, 2017 14:10 JST | Japan
CopyCopied

TOKYO -- Some 1.27 million small and midsize businesses in Japan face the risk of closure due to a lack of successors. Already, roughly half the companies that go out of business do so despite being in the black. As more than 60% of SMEs are due to be run by managers aged 70 or older by 2025, the crisis will only intensify.

The government is scrambling to prevent these companies from dying en masse. Not only would a widespread die-off weaken the backbone of Japanese industry, it could also result in the loss of exclusive technology.

In Tokyo's Sumida district, in the shadow of the landmark Tokyo Skytree, Okano Kogyo produces ultrathin painless hypodermic needles. The metalworking company, founded in 1924, is internationally renowned for its unique technology, but Masayuki Okano, its 84-year-old chairman, is pessimistic about its future.

"I'm thinking I'll close the company in about two years," Okano says with a calm suggesting he has reached a kind of understanding with the situation.

Okano Kogyo's manufacturing of molds and presses has helped improve technology for producing automobiles and other goods as well, and the company is in the black. But "there's no one to take over" from Okano, who says his two daughters "took a different path." Control of the company's needle manufacturing equipment will pass to medical equipment maker Terumo, which shares patents on the machinery.

It will be "a blow to the foundations of manufacturing if businesses with unique technology die out," says an executive at an autoparts maker that has done business with Okano.

Some 29,583 of Japan's small and midsize enterprises closed temporarily or permanently in 2016, according to Tokyo Shoko Research. That figure represents a steep rise from 2007's roughly 21,000. The shrinking population is increasingly leading to the closures.

Two years ago, the closure of Hagoromo Chalk caused grief around the world -- especially among mathematicians. The 82-year-old Japanese company's tough, dustless product was considered the "Rolls Royce" of chalk, but its president, Takayasu Watanabe, opted to shut down because he had no successor.

"We received a flood of faxes and nonstop telephone calls, and could hardly keep up with orders," Watanabe said in an interview about the response to his announcement. With nobody to pass the baton to, he shipped the remaining chalk-producing machines to South Korea. 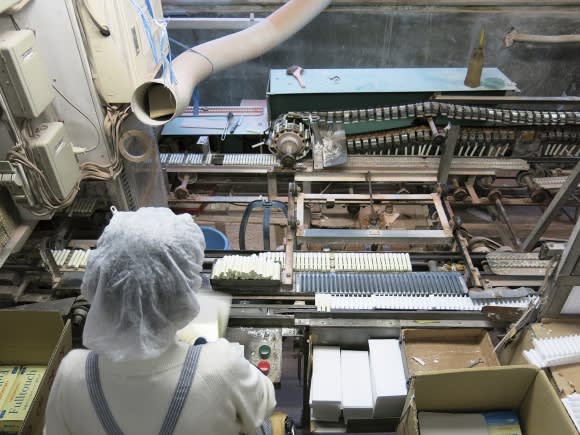 At its peak, Hagoromo Stationery produced 90 million sticks of chalk a year.

In 2015, the largest portion of small and midsize business managers were between the ages of 65 and 69, says the Ministry of Economy, Trade and Industry. Such managers retire on average at 70, and in 2025, about 2.45 million -- at least 60% -- will be at retirement age. Some 1.27 million, or about half the number of retirees-to-be, said in a METI survey they had not appointed a successor. About 70% of sole proprietors age 60 or older said their business would not continue after them.

"A period is approaching in which many businesses will close," says one METI official. "The next decade will be crucial."

If left unchecked, such closures could rob Japan of about 6.5 million jobs and 22 trillion yen ($194 billion) in gross domestic product by 2025, according to METI's internal calculations. Businesses passed on across generations also strongly tend to increase profitability and sales. Japan's government intends to churn out policy over the next half decade or so to avoid a mass extinction. To spur succession arrangements to come together quickly, Tokyo will need to make full use of tax codes, financial mechanisms and budgetary measures. Right now, managers taking on a business from a relative can defer payment of inheritance taxes and gift taxes, for instance. But they can only do so if they keep on at least 80% of employees, so that provision has been criticized for being hard to take advantage of.

The government plans to drastically overhaul such areas, as well as lighten the tax burden small to midsize business managers face from mergers and acquisitions. There is also plenty of room for the government to link up with banks and other institutions to expand support programs, such as low-interest loans to encourage business heirs to invest actively.

Some businesses are finding successors outside company walls. At Hiroshima's Miyakehonten, the veteran brewer of Sempuku brand sake, President Miyake Kiyotsugu brought in a staffer from the Japan Human Resources agency to help.

Miyake's son, the company heir, was still in his 20s. It would be faster "to take in someone from outside who can carry on the medium-term management plan," Miyake argued, waving off internal inclinations for a more cautious approach. The president also figured casting a wider net could help the business rack its brains for a way to sell to young people, who are increasingly drifting away from sake.

The government aims to increase outside appointments by lightening regulations on second and side businesses. Also, specialists at chambers of commerce and other bodies nationwide have consulted with managers to help find successors in as many as 800 cases. That figure is planned to grow to 2,000 cases annually in five years, though this is still a drop in the bucket given the over 1 million businesses in need of successors.

To address the problem on a larger scale, many say Japan should have a market for small-scale mergers and acquisitions so investors can more easily approach such enterprises. France, for instance, has a nationwide online database of information on businesses looking to sell.

Such a market would make it easier for Asian investors to get involved as well. Overseas help is certainly an option if it helps stave off mass closures and keeps Japan's industry healthy.