TOKYO -- Japan's economy contracted 0.9% in January-March, or at an annualized pace of 3.4%, the Cabinet Office said Monday, showing that the world's third-largest economy was in a technical recession even before a state of national emergency was declared over the coronavirus outbreak.

The second consecutive quarterly contraction, while widely anticipated, is still a reminder to the government of Prime Minister Shinzo Abe of the need for urgent action to prevent the pandemic from completely derailing his Abenomics economic revival program.

The weakness was broad-based, with declines in all segments, from private consumption and residential investment to business investment, inventories and exports. "Every activity in the private sector shrank in the first quarter," said Hideo Kumano, chief economist at Dai-ichiLife Research Institute.

An annualized decline of 4.6% was expected, according to a survey of 33 economists by the Japan Center for Economic Research, a Nikkei affiliate.

The first-quarter decline in gross domestic product, a broad measure of economic activity, follows an annualized drop of 7.3% in October-December, a period that was marked by a deep consumption slump caused by a tax increase and a huge typhoon in the Tokyo region in October. 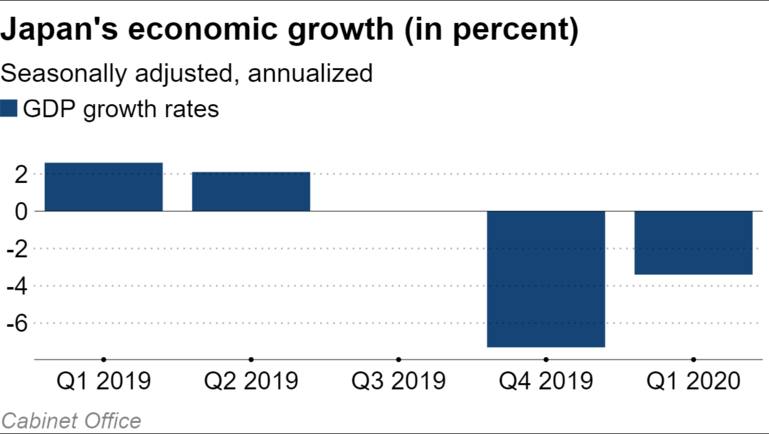 A budding recovery in January and February was followed by the worldwide spread of the coronavirus in March, leading to a plunge in inbound tourism and exports to China and the U.S.

No major economy has been spared the virus's impact. South Korea's GDP fell 1.4% from the previous quarter, Germany logged a 2.2% decline and the U.S. recorded a 1.2% drop. China's economy fell 6.8% from a year before.

Economists say the worst is still to come. Japan's economy is expected to decline 5.8% in the April-June quarter, or at an annualized pace of 21%, according to a survey by JCER. Most restaurants, large retail outlets, hotels and movie theaters have been shuttered under restrictions imposed by an April 7 national emergency declaration. The restrictions were partially lifted on May 14, but are still in place for Tokyo and Osaka, the nation's two largest cities.

The Abe government enacted an emergency relief program equivalent in size to 20% of GDP on April 30. It is set to propose a second relief program this month, hoping to get it enacted by mid-June.

Attention will also focus on the speed of policy implementation. "The question," he said, "is how effective the relief measures will be and whether the government will be able to take additional steps in a speedy manner."