Japan's PM to exit as Abenomics fizzles with goals unmet 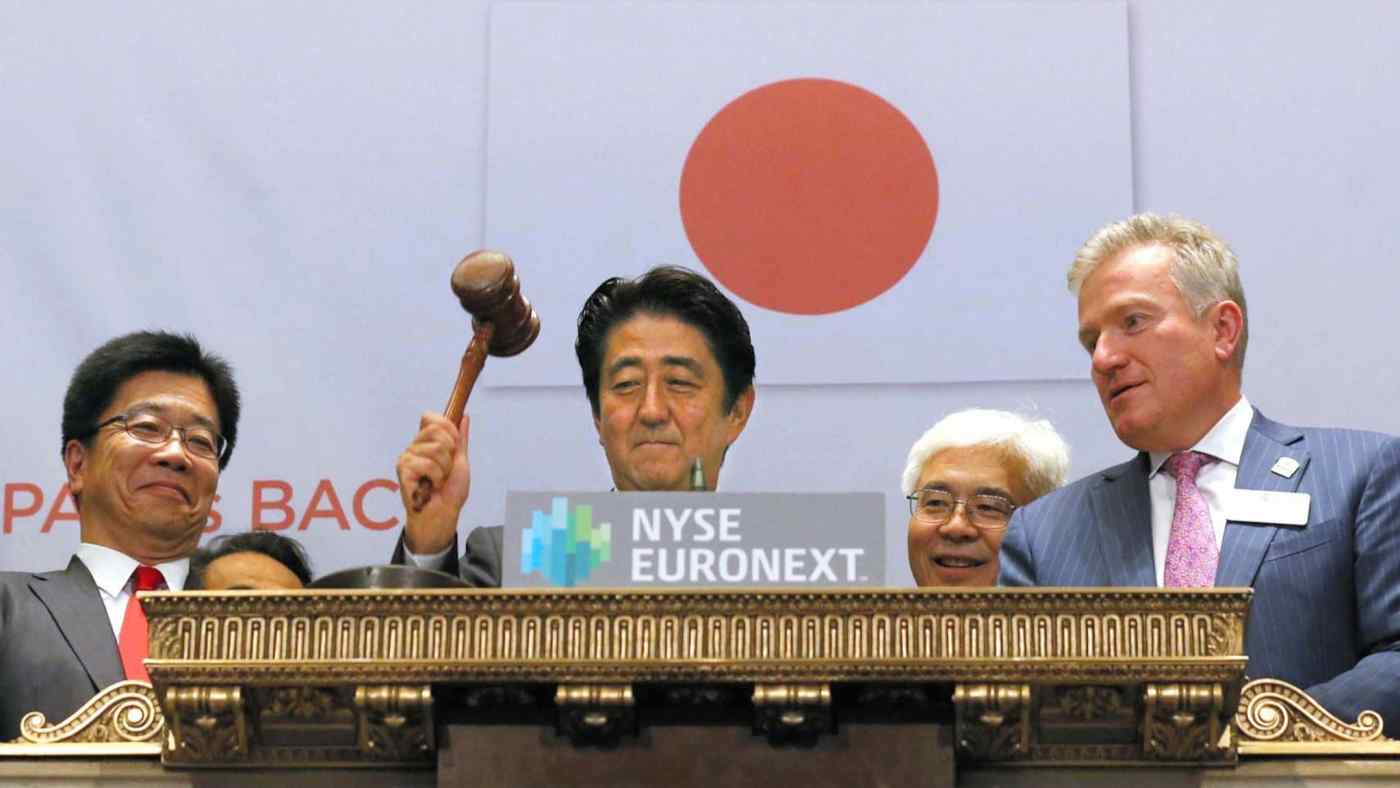 "Buy my Abenomics," Prime Minister Shinzo Abe urged at the New York Stock Exchange in September 2013, but it proved a hard sell to make toward the end of his time in office.
MASAHARU TATENO, Nikkei staff writerAugust 31, 2020 09:39 JST | Japan
CopyCopied

TOKYO -- After his comeback as prime minister in December 2012, Shinzo Abe often talked about getting Japan's economy off to a "rocket start."

But the growth-boosting reflation campaign that became known as Abenomics fizzled in the second half of his record-breaking tenure.

Abe leaves office having presided over a dramatic improvement in Japan's job market and a surge in inbound tourism, but the coronavirus pandemic has undone even some of those gains in his mixed economic policy record.

The "Japan Revitalization Strategy" released by his government in June 2013 set ambitious growth targets: average annual increases of 3% in nominal gross domestic product and 2% in inflation-adjusted real GDP over the following 10 years.

But while real GDP jumped 2.6% in fiscal 2013, it shrunk in fiscal 2014, owing largely to a consumption tax hike that April. Growth failed to reach 2% again, reaching just 0.3% in fiscal 2018 and zero in fiscal 2019. Japan's economy is expected to contract sharply this fiscal year due to the pandemic.

Abe's government sought to boost nominal GDP to 600 trillion yen ($5.7 trillion) by around 2020, but that goal now looks out of reach. Annualized quarterly GDP peaked at 557 trillion yen in the third quarter of 2019, followed by three quarters of negative expansion after the consumption tax was raised again in October. The coronavirus has compounded the difficulty of rekindling growth.

GDP clocked in at 506 trillion yen last quarter -- not far above the 492 trillion yen recorded in the final three months of 2012. Visitors posing for a photo at Tokyo's Sensoji temple in September 2019: One of Abe's successes was promoting foreign tourism through such steps as relaxing visa requirements. (Photo by Akira Kodaka)

Inflation has remained stubbornly low despite Abe's efforts to combat years of deflation in the world's third-largest economy. The government issued a statement with Haruhiko Kuroda's Bank of Japan in January 2013 setting a "price stability" target of 2%. But by calendar year, that aim was achieved only in 2014, the year of Abe's first consumption tax hike. The rate now hovers around zero, again raising the specter of deflation.

Corporate earnings and employment improved during Abe's tenure. The jobless rate stood at a historic low in the lower 2% range at the end of 2019, down from 4.3% in December 2012.

But Japan's economic recovery ended in October 2018 after 71 months, missing the postwar record set by the "Izanami boom" of 2002 to 2008. Unemployment is ticking upward, coming in at 2.8% for June.

The downturn came around the time that the U.S.-China trade war escalated, causing the global economy to slow and weighing on foreign demand for Japanese goods and services. While the prime minister talked up his success in engineering a recovery driven by domestic demand, Abenomics failed to change the country's long-standing reliance on exports.

One of Abe's successes was promoting foreign tourism through such steps as relaxing visa requirements. That fueled a surge in visitors and spending, which counts as exports for GDP purposes. But the benefits have been wiped out by the coronavirus pandemic, which sent the number of overseas visitors plunging to fewer than 10,000 a month.

Abe's government came out with various policies to address the structural causes of Japan's persistently sluggish domestic demand, which include an aging society, low birthrate and weak productivity growth, but the data indicates that they have failed to bear fruit.

Take Japan's push to revive its regions, which aimed to end the growing concentration of people and business in Tokyo. The goal was to reduce net inflows into the capital and its surrounding prefectures to zero by 2020. But the annual tally rose under Abe, from 67,209 people in 2012 to 145,576 people in 2019.

Births have continued to decline despite Abe's emphasis on support for families raising children. The total fertility rate -- the number of children a woman has in her lifetime -- peaked at 1.45 in 2015, barely above the 2012 figure of 1.41, then declined for four straight years to 1.36 in 2019.

In a speech at the New York Stock Exchange in September 2013, Abe urged investors to "buy my Abenomics." But many are skeptical of his results. Japan ranked 18th among members of the Organization for Economic Cooperation and Development in the World Bank's latest ease of doing business survey, well shy of the government's goal of breaking into the top three by 2020.