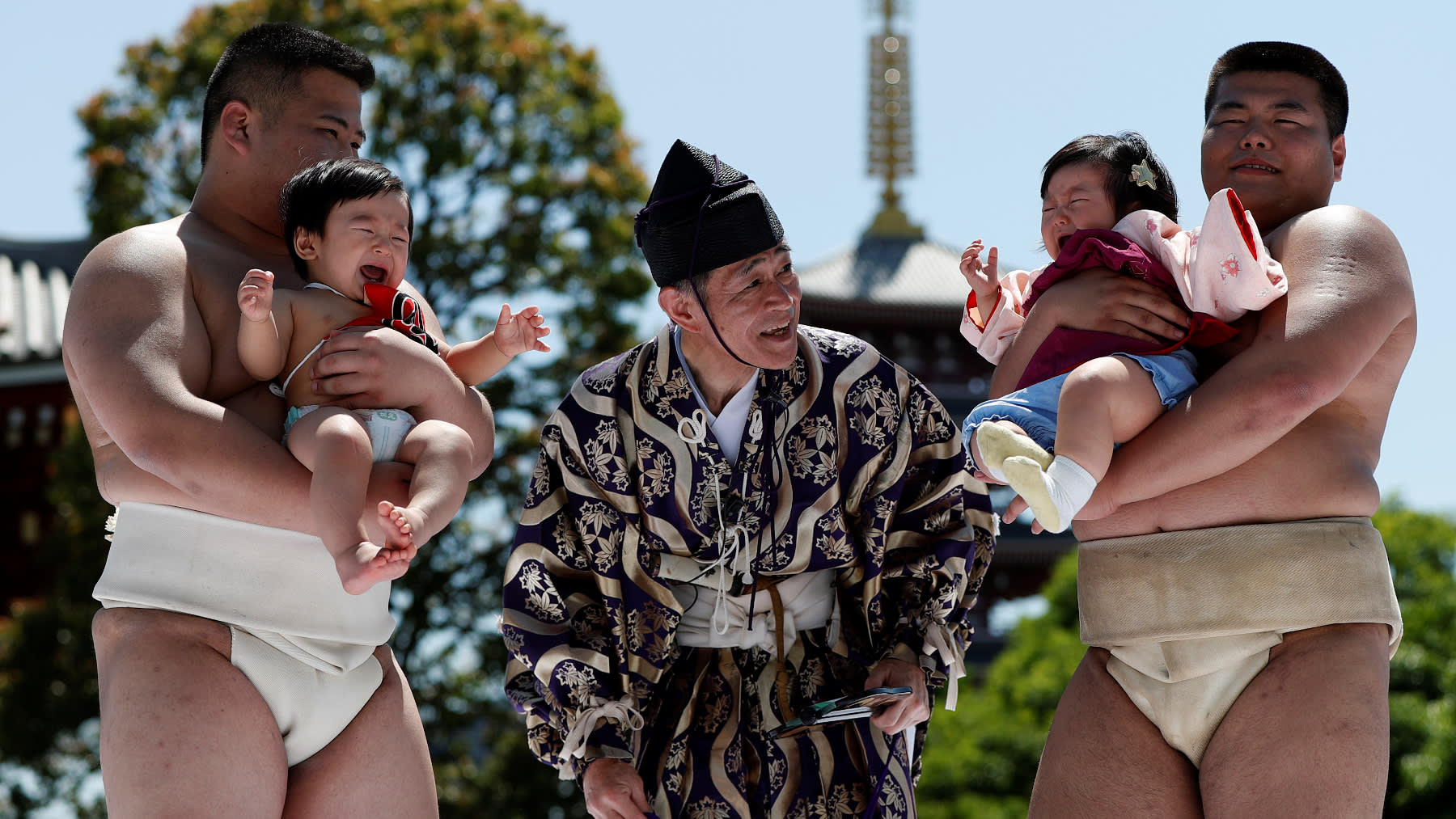 Japanese babies cry as they are held up by amateur sumo wrestlers during a baby crying contest at Sensoji temple in Tokyo. In the contest two wrestlers each hold a baby while a referee makes faces and loud noises to make them cry. The baby who cries the loudest wins.   © Reuters

TOKYO -- Japanese births are on pace for the steepest drop in three decades, plunging even by comparison to the declines in recent years, despite earlier hopes that couples would ring in the new Imperial era with an addition to the family.

Total births fell 5.6% on the year in the January-September period to 673,800, preliminary data published Tuesday by the health ministry shows. The full-year total last dropped by more than 5% in 1989.

One big factor this year is that echo baby boomers -- those born during a major surge in births between 1971 and 1974 -- are all turning 45 or older this year, leaving fewer women of childbearing age. The high hopes Japan had for this generation for boosting the birth rate did not materialize. Japan's total fertility rate, or the average number of children by a woman in her lifetime, also fell for the third straight year to 1.42 in 2018.

New marriages in Japan almost doubled on the year in May, coinciding with Emperor Naruhito's ascension that month. But the number of marriages has decreased since, cooling speculation that births would rebound soon.

Some experts suggest that couples were holding off on having babies earlier this year, waiting for the start of the Reiwa era in May under the new emperor. But no consensus exists on exactly what triggered this year's crash.

Smaller communities are already deep in crisis. Not a single baby was born last year in the town of Hayakawa, near Mount Fuji, or in the village of Nosegawa south of Osaka. Dozens of municipalities recorded births in the single digits.

Japan is overhauling day care and rolling out other measures designed to stem the population decline. The day care reforms include encouraging facilities in the same area to take turns opening on Saturdays to ease the burden on staffers.

About 90% of Japan's privately run day care centers are open every Saturday, according to a study by the Cabinet Office in fiscal 2018. Saturday coverage is in high demand among parents in the service industry, but the centers have overall utilization rates of about 30% on those days.

Japan faces a serious shortage of child care providers, which has led to difficult work conditions for those on the ground. Streamlining weekend care could reduce overwork among providers and improve service.

The country's aging, shrinking population could destabilize Japan's social security system, while squeezing the labor force and driving up medical costs and pension payments. The government faces an urgent need not only to help families have and raise children, but to boost the productivity of each existing member of society.