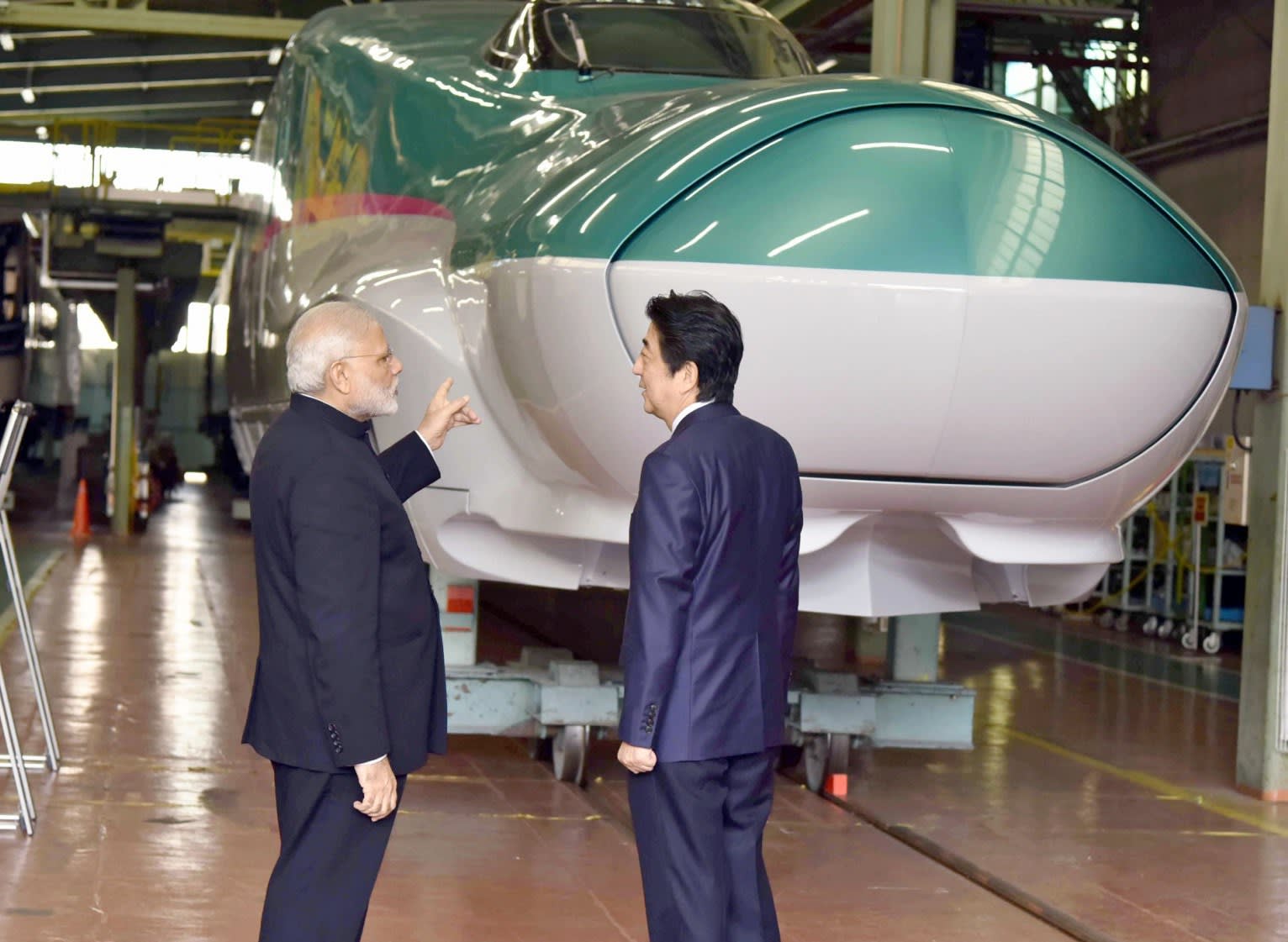 TOKYO -- Japan's shinkansen is heading to India. A project debuting the country's bullet train technology on the Asian subcontinent is getting underway, with a work commencement ceremony scheduled to take place before the end of the year. Next stop: Gujarat.

The line will stretch along India's western coast between the commercial hub of Mumbai, India's largest city, and Ahmedabad in Gujarat. Trains are expected to cover the 505km distance in just two hours and seven minutes at the fastest. Work is scheduled to be completed by 2023.

The introduction of the line will positively impact the country both economically and socially, a Japanese development assistance official said.

"A high-speed railway that is safe, comfortable and punctual will give businesspeople just what they need, and it can trigger significant economic development," the Japan International Cooperation Agency's Takema Sakamoto said. Sakamoto is JICA's chief representative in India and has been engaged for many years in work to support the country's development. He said the train system's economic boost will be wide-ranging. For example, Sakamoto expects it to lead to development in areas adjacent to train stations as well as mitigate excessive economic concentration in large cities, helping India grow in a more balanced manner.

But the advantages will not be limited to the economic domain.

"I believe it will have a positive impact on the way people behave [in public settings], such as waiting in orderly lines for a train and maintaining good manners, because we've seen this happen after the success of the Delhi Metro," Sakamoto said.

Critics, however, say the shinkansen system is an extravagance for a developing country.

Sakamoto counters that this is not exactly the case when considering the fact that India's current gross domestic product per person is largely on a par with Japan's level at the time it introduced the bullet train in 1964, when compared using an exchange rate that takes into account the purchasing power difference between the two countries' currencies.

Sakamoto said India's initial investment can be recovered by taking advantage of Japan's know-how in raising operational efficiency. He added that India can learn from Japan's strategies to do such things as enable a dense timetable, which includes cleaning the inside of trains in under seven minutes at the terminus.

India's shinkansen operators plan to set the fare between Mumbai and Ahmedabad at about half the average charged by airlines for the same route. But there are concerns that high-speed rail may not be profitable in India because discount airlines have already established a strong presence in the transportation industry.

"Aircraft take a little over an hour to travel [between the two cities], but if you take into account [air travel's negative aspects such as ] traffic jams before getting to the airport and the [time-consuming] boarding procedures, and the comfort of [train] travel, high-speed rail has a great advantage," Sakamoto said.

"The non-fare revenue estimates in the [Indian shinkansen's] feasibility study aren't overly ambitious, but you can expect ads, restaurants and the sale of goods inside the stations, as well as development projects in areas around the stations, and [all that] will generate large revenues," Sakamoto said.

Assistance is already being provided to draw up business plans for facilities inside the projected stations, including Ahmedabad, he added.