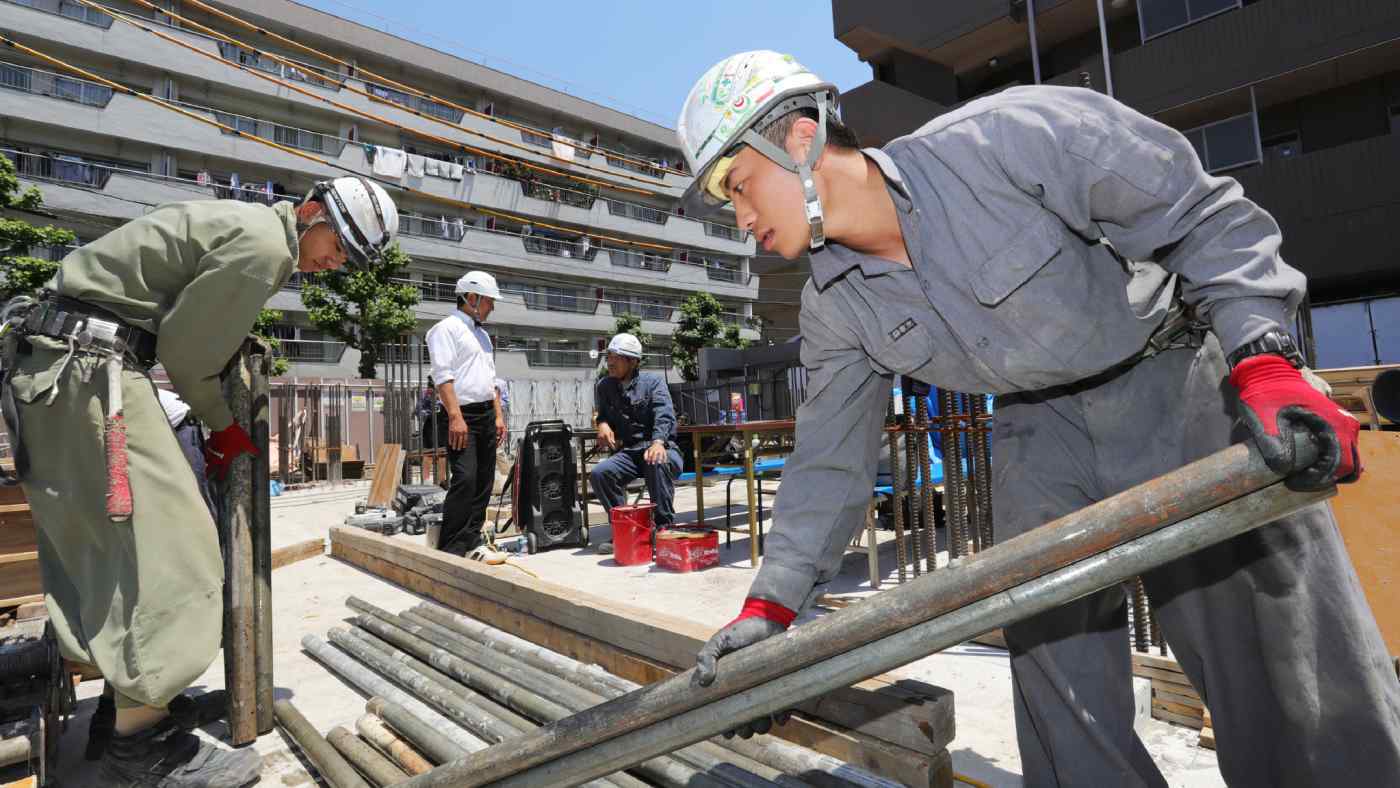 TOKYO -- Japan's construction businesses appear headed for an even deeper labor shortage despite government efforts to attract foreign workers, unless the industry takes steps to make its jobs more appealing.

"If I can stay in Japan longer, I would like to take a grade 1 certified skilled worker test," said a Vietnamese employee at Tokyo-based builder Mukai, in fluent Japanese, referring to a grade held by more senior-level workers.

Recognized for his molding skills, this employee's responsibilities include giving instructions to younger Japanese staff. He is a leader figure among the Vietnamese trainees at the company. Yet the current trainee program permits him to work in Japan for only another year and a half.

Japan's construction industry increasingly depends on foreign labor. Roughly 55,000 foreigners worked in construction as of the end of last year, more than quadruple the figure from five years ago.

However, technical trainees can work in Japan for just three to five years. A rule introduced in 2015 lets trainees return to Japan, but they may work only another two to three years. Though the government plans to introduce new residency qualifications, such stays will remained limited.

An increase in the number of foreigners means a higher turnover. To maintain productivity at construction sites, companies need to invest more in training and improve the way skills are passed on. Foreigners often earn less than their Japanese colleagues as well. A technical trainee in construction receives about 168,000 yen ($1,510) a month. "We must not put the brakes on the trend to improve pay for workers in Japan," said Takashi Yamauchi, chairman of the Japan Federation of Construction Contractors. Though wages are rising in the industry overall, some small and midsize companies may become reluctant to boost salaries if foreigners are receiving low pay.

The average annual pay for a male construction worker in Japan is about $40,000, lower than the $50,000 average for all industries and the $42,200 for manufacturing jobs. Unless construction companies pay workers more, they will have trouble securing Japanese employees, who make up the bulk of the workforce.

Low wages will also spur foreigners to shun construction jobs. About 2,300 construction trainees came from China in 2016, down almost 30% from 2012. Rising wages back home have given Chinese workers less incentive to work in Japan.

Yamauchi acknowledges the need to shift toward "equal pay for equal work" in construction. But paying workers equally regardless of nationality is far from an industry-wide consensus.

At roughly half of the construction sites in Japan, workers receive no more than four days off per month, according to a survey by a labor union representing construction employees. And about half of employees without an education beyond high school graduation quit within three years of joining the company.

More trainees are coming from Southeast Asia, including Vietnam and the Philippines. But that trend may not last, as many foreigners working in Japan convey the conditions to those back home via social media.

Foreign workers are essential to resolve the labor shortage. The biggest challenge is "whether the industry can transform itself to become popular to all nationalities," a ministry official said.

Thanks to a construction boom ahead of the 2020 Tokyo Olympics, Japan's four leading general contractors have a total of more than 7 trillion yen in outstanding construction orders. The industry faces a test of whether it can carry out reforms while it still has the strength.