Encouraged by new codes, institutional investors turn up the heat on management Japanese companies have been getting an earful from investors lately. As scandals envelop Toshiba, Fujifilm group and air bag maker Takata, demands for better corporate governance across all of Japan Inc. are growing louder -- and they are being heard.

TOKYO "If all the people sitting there were replaced, the corporate culture would change instantly," one irritated shareholder said at Toshiba's annual shareholders meeting on June 28, drawing applause from the other attendees. The scandal-hit electronics giant has decided to sell its semiconductor business and is on the verge of breaking up.

Fujifilm Holdings, which held its annual meeting the following day, was also in hot water, with angry shareholders demanding an explanation for an accounting scandal at one of the company's overseas subsidiaries. The meeting lasted for about two hours, 30 minutes longer than last year's event. 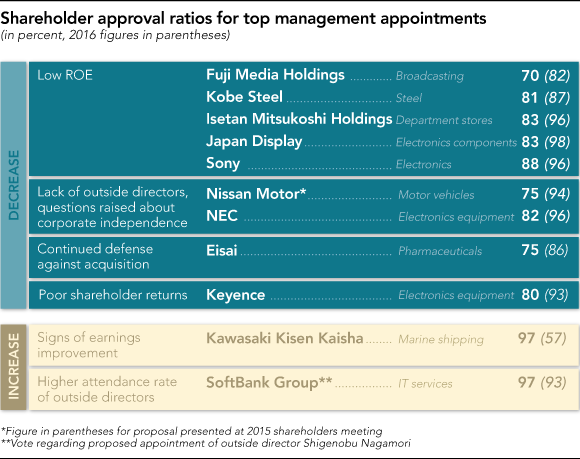 Of the 96 companies covered by a Mitsubishi UFJ Morgan Stanley Securities survey of Nikkei Stock Average constituents, 67% saw declines in the percentage of "yes" votes for proposals to appoint top managers. Only 70% of shareholders of Fuji Media Holdings, whose TV station has been suffering from low viewer ratings, voted in favor of a proposal to appoint a new chairman. That is down 12 points from the previous vote. The percentages of support for top management appointments remained below 90% at Sony and Kobe Steel. In the U.S., the rate is usually over 90%. According to Toshiaki Oguchi, representative director of Governance for Owners Japan, companies whose "yes" votes are less than 80% should take the results seriously and present improvement measures to their shareholders.

PAYING ATTENTION Shareholders' sudden scrutiny of corporate governance stems from a request that institutional investors disclose how they voted on individual proposals.

Japan's push to improve corporate governance began in earnest only recently. The government of Prime Minister Shinzo Abe, who took office in 2012, made corporate governance reform one of the three main pillars of its economic policy. In 2014, the Financial Services Agency introduced the Japanese version of the U.K's Stewardship Code for institutional investors. The following year, the agency, together with the Tokyo Stock Exchange, introduced the Corporate Governance Code to encourage listed companies to try to raise their corporate value. 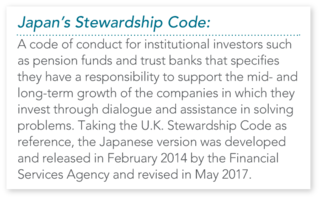 This year's shareholders meetings drew particular attention as they were the first held since the Stewardship Code was revised in May. The amended code calls for institutional investors such as asset management companies, trust banks and life insurers to disclose how they voted on all proposals by companies for which they have voting rights and to explain why they did so. Many leading asset managers are expected to disclose this information on their websites later this year, though Nippon Life Insurance is a notable exception. The Japanese insurance giant has said it will not be making its voting history public for the time being.

A majority of asset management companies in Japan belong to leading financial groups. There are persistent concerns that they give special consideration when voting on proposals of group companies or business partners in which they have stakes. Making the voting process more transparent will allow investors to put pressure on asset managers should these concerns prove accurate.

Investors are already turning up the heat.

In early June, asset management company officials in charge of exercising voting rights received a letter requesting that they disclose their votes on individual proposals. The senders were four public pension funds, including the Government Pension Investment Fund and the Pension Fund Association for Local Government Officials. Public pension funds are some of the most important customers for asset managers -- the GPIF alone has assets worth more than 140 trillion yen ($1.24 trillion) -- and their requests cannot be ignored.

"We are not allowed to exercise our voting rights improperly, and our dialogue with companies has become more intense," said an official at Dai-ichi Life Insurance.

FRUITFUL CHANGES The amended code has made shareholders meetings more transparent, and it is affecting corporate management.

Institutional investors, for example, have been critical of measures intended to defend against hostile takeovers but which could be exploited by members of management to keep their positions. According to Tokyo-based consultancy Recof, a record 40 companies, including Panasonic and Capcom, decided to scrap anti-buyout measures between January and May. Asset management companies, pressured by pension funds, had told companies that they would vote against proposals for anti-buyout measures, making it likely that they would be rejected.

There is also much criticism of the counselors and advisers often found at Japanese companies, generally former presidents or chief executive officers reappointed after retirement. According to a study by the Minister of Economy, Trade and Industry, 60% of listed companies have such positions. Japan's Companies Act, however, does not define these roles, and their authority, responsibilities and remunerations are often unclear.

In Toshiba's accounting scandals, the conglomerate was criticized when advisers were found to have exercised influence over management. Increasing pressure from institutional investors has convinced Nisshinbo Holdings and Hankyu Hanshin Holdings to abolish the corporate adviser system this year.

PROPOSAL A major focus of shareholders meetings is selecting outside directors, which used to be rare in corporate Japan. Their numbers have surged since the introduction the Corporate Governance Code, however, which recommends having at least two independent directors. Nomura Asset Management is one of the many institutional investors that said it would oppose proposals by companies with one or no outside director.

The California Public Employees' Retirement System and three British asset management companies have made a joint request that independent directors account for more than one-third of the boards of companies they invest in and warned that they will vote against proposals for board member appointments if the request is refused. As if in answer, Panasonic decided at its shareholders meeting on June 29 to raise the ratio of independent directors to more than one-third.

The revision of the Stewardship Code has led institutional investors to more closely examine proposals that are put to a vote at shareholders meetings. For managers, this means it has become harder to have their proposals approved, while for shareholders it means a greater chance of seeing their requests accepted.

Kuroda Electric, an electronics parts trading house, approved a proposal by activist investment company Reno to appoint one outside director at a June 29 meeting in Osaka. The management was opposed, but other shareholders, frustrated with the company's worsening earnings, are believed to have voted for the move. It is the first time in eight years in Japan that a proposal by an activist investor has been approved. 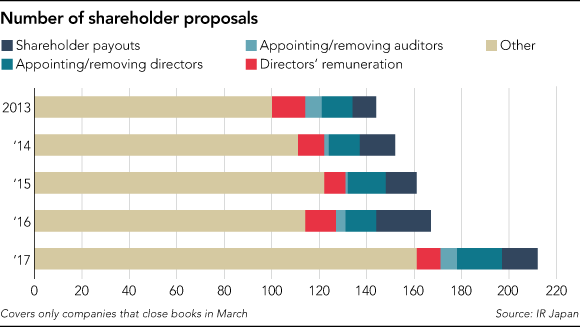 Shareholders can make a proposal if they hold shares giving them more than 1% of all voting rights for more than six months, among other requirements. As of June 29, shareholders had made 212 proposals, up 27% on the year and a record high, according to research company IR Japan. Even though almost all were voted down, some of these proposals garnered more than 10% support from shareholders. Toshiyuki Imamura of Nomura Asset Management said an increasing number of shareholder proposals are "worth considering." 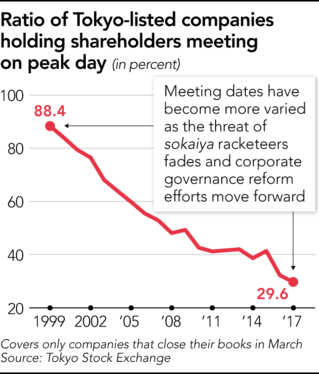 A related development involves the dates of shareholders meetings. Many Japanese companies used to hold their meetings on the same day to prevent racketeers known as sokaiya from attending and disrupting the proceedings. In the 1990s, around 90% of these meetings were held on a single day. The peak this year came on June 29, when just 29% of companies whose business year ends in March held meetings. This is the first time that less than 30% of shareholder meetings were held on the busiest day. A freer schedule is expected to give companies greater opportunity to engage with investors and ultimately, it is hoped, raise their corporate value. A growing number of listed companies are also adopting the "company with an audit and supervisory committee" system, in which a committee made up mainly of independent directors supervises management. Around 800 companies had adopted the system as of the end of June, up nearly 30% from a year before.

LESSONS TO LEARN Examples of poor corporate governance are all too easy to find in Japan. Takata has filed for bankruptcy protection due to a scandal involving defective air bags, while Idemitsu Kosan's merger talks with Showa Shell Sekiyu have stalled due to the founding family's objection. And although the schedule is less concentrated, 64% of companies held their investors meetings between June 27 and 29. Meanwhile, many companies are having trouble appointing more outside directors, according to Yutaka Suzuki, chief researcher at the Daiwa Institute of Research , due to a lack of qualified candidates.

The transition to the audit and supervisory committee system is seen by some as a quick way to increase the number of outside directors. This is because auditors employed under the more common system of "company with a board of corporate auditors" can be easily reassigned as outside directors on the new committee.

"Corporate governance reforms in Japan have drastically changed since the introduction of the Corporate Governance Code, to the surprise of overseas investors," said Takeyuki Ishida, head of Japan research at Institutional Shareholder Services. "But the country lags far behind other nations."

Nevertheless, Japan came third in the 2016 corporate governance ranking by the Asian Corporate Governance Association, after Singapore and Hong Kong, and its score has risen for two straight years. With its twin codes, the country has just started to foster corporate governance reform in earnest. Such efforts could serve as a valuable lesson for other governments and businesses in the region.