Japan's economy shrinks after a slew of natural disasters TOKYO -- Japan's economy contracted in the July-September quarter, as exports slumped and consumer and business spending took a beating from a series of natural disasters.

The world's third-biggest economy shrank 1.2% from the preceding three-month period on a seasonally adjusted annualized basis, the Cabinet Office said Wednesday. The headline figure compares with a 0.7% contraction predicted by analysts surveyed by the Japan Center for Economic Research, a Nikkei affiliate.

In September, Typhoon Jebi struck the major metropolitan area of Osaka, damaging transport infrastructure and holding up exports from the western Japan region for weeks. Northern Japan was hit by a major earthquake in the same month, hurting the tourism and services industries.

Exports were the biggest casualty of the typhoon. They contracted 7.1% on an annualized basis, the sharpest decline in more than three years. The disasters also affected farm production, pushing up the prices of vegetables and pinching household consumption.

"The stagnation in consumer spending is particularly worrying given that labor income rose by a robust 1.5% in real terms over the past year," Thieliant said. However, he predicted that consumption will rebound as households bring forward spending ahead of a planned sales-tax increase in October next year. 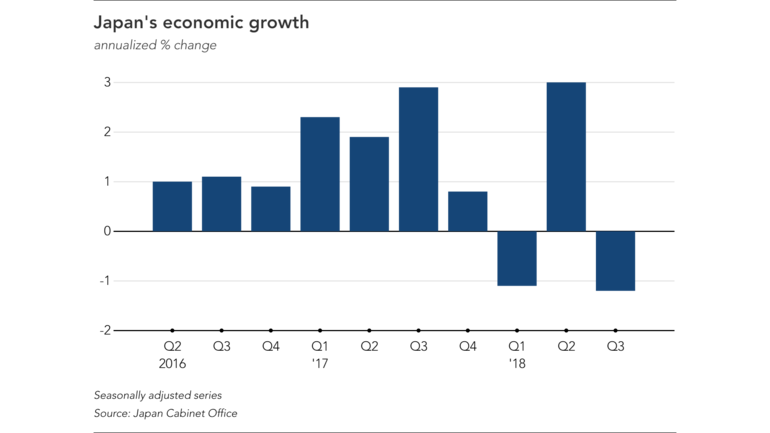 The contraction is the second this year. The economy shrank 1.1% in the first quarter before a 3% gain in the April-June period. Many economists expect growth to recover in the final quarter of the year.

The slowdown came amid growing uncertainty over the outlook for the global economy as a trade spat intensifies between the U.S. and China, and the U.S. Federal Reserve continues to raise rates.

For now, there is little evidence to suggest the trade war is biting into the real economy, said Takuji Aida, chief Japan economist for Societe Generale. But he warned that an expected recovery in the fourth quarter could be cut short if the spat begins to hurt global trade.

But the lackluster growth underscores the fragility of the Japanese economy due to a rapidly aging population and an intensifying labor shortage.

Next year, Prime Minister Shinzo Abe's government is scheduled to raise the nation's tax on consumer goods -- a move aimed at reducing Japan's fiscal deficits and shore up funding to pay for increasing social security costs.

The data may strengthen the Bank of Japan's case for keeping its ultra easy monetary policy in place.