TOKYO -- The makeup of the classroom at Japan Welfare Education College in Tokyo has changed dramatically in just a couple of years.

In over 30 years of operating, barely a single international student walked through the door. This year, nearly one in six first-year students in the elder care department come from abroad -- from China, South Korea and Vietnam.

At the end of its two-year course, they are expected to take the national board exam and work in Asia's most rapidly aging country.

The sudden change comes on the back of a relaxation of visa regulations designed to bring more foreign workers into Japan's drastically understaffed elder care industry. As of September, when the new rules came into effect, international students who obtain the national caregiver license can live and work in the country for up to five years -- a status that can be renewed indefinitely.

But the school, which has another 10 international students in their second year, admits the rush to accommodate the new arrivals has come with a number of unforeseen problems -- students have fallen behind academically and struggled to balance study and work.

Experts warn that a haphazard approach to recruitment could prove detrimental to the country's drive to bring much-needed foreign personnel into the industry.

JWEC is one of several institutions trying to cope with the sudden surge in intake. This year, 591 non-Japanese students entered elder care schools in Japan, close to 35 times the number of just 17 in 2014. Students from Vietnam, Nepal and the Philippines accounted for nearly 75% of the overseas students. 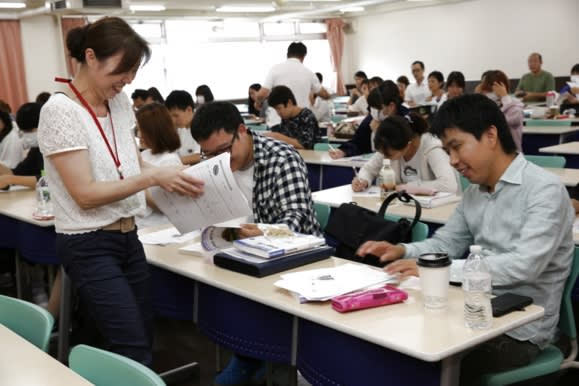 Students at the elder care department of Japan Welfare Education College in Tokyo take a pop quiz. Many of the international contingent have struggled with the course content's technical vocabulary. (Photo by Tsubasa Suruga)

Some of the issues they face were in evidence during an entry level lecture on the respiratory system at the college's Takadanobaba campus in western Tokyo recently.

"The brainstem monitors changes in carbon dioxide," the teacher read out as the slides flashed up on the screen in Japanese, prompting many of the students in the front row to frantically look up terms on their phones.

"That sends instructions to the intercostal muscles and the diaphragm to contract and expand the lungs," continued the lecturer as the class desperately tried to scribble down notes.

With the content full of technical vocabulary most native speakers would struggle with, many of the international students find it tough going.

"The lectures are very fast. I always have a hard time keeping up," said 29 year-old Kim Sun-in from South Korea. "The technical terms in kanji (Chinese characters) are especially difficult." After failing many of the exams last semester, he is expected to retake them soon. "I want to live and work in Japan for a long time. I will do my best [for the national board exam], but I'm worried I might not pass." The language barrier can be even more of a problem during the course's compulsory on-the-job training. "International students struggle to take accurate patient records. Many end up receiving poor appraisals," said Kumiko Yako, head of the school's elder care department. Mistakes with numbers are common, such as when noting down the time when patients wake up and take their medicine, which can lead to miscommunication between staff.

JWEC conducts entry tests and interviews for international candidates, but the school admits it failed to set clear language proficiency requirements. "It's hard to eliminate candidates based on specific grades. We would be left with almost no applicants," said Tsutomu Ohta, manager of general affairs and accounting. The school plans to take 40 new foreign students for the next school year.

Financial support is another concern. "I'd like to concentrate on studying more, but I also have to work," said Ngyuen Thi Ngoc Hanh, a 24-year old from Vietnam who started at the school this year. School fees total 2.5 million yen (about $22,000) for the two-year course. Out of the 130,000 yen a month she earns as an interpreter at a call center after class, 75,000 yen goes on tuition and 40,000 yen on rent, leaving little for living expenses.

JWEC is gradually trying to address these issues. The department has brought in additional tutors to provide extra language classes a few times a week and has prepared more teaching materials to help with reading the kanji. The school also now waives the 150,000 yen enrollment fee for some international students.

Some experts see a need for the introduction of a minimum Japanese proficiency level. Even so, Yuko Hirano, professor of medical sociology at Nagasaki University views the visa relaxation as a "hasty, shortsighted measure simply designed to meet the shortage of workers," similar to the government's past efforts to bring in foreign staff.

Japan had already been accepting a limited number of elder care workers since 2008 under economic partnership agreements with Indonesia, the Philippines and Vietnam. Applicants are eligible to work in Japan indefinitely if they pass the exam after taking Japanese classes and training at care facilities for three years. But of the total 2,740 candidates, only 402 had passed the exam as of last year. 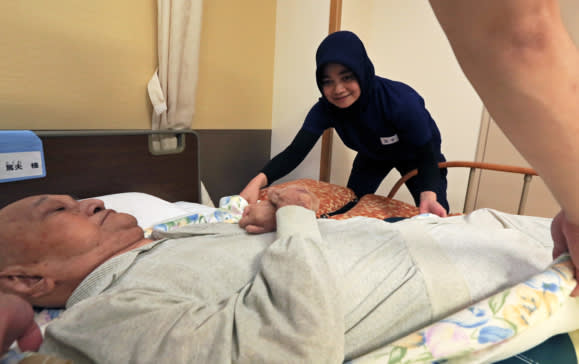 An Indonesian carer helps a resident get out of bed at Sawayakaen, an elder care center in Yokohama. (Photo by Ken Kobayashi)

Those who do pass often leave their jobs before too long -- despite all the time, effort and money they have spent obtaining their licenses. Hirano, who has been researching the situation for Japan's foreign care workers, estimates that up to 38% have left the country due to unpleasant working conditions and long hours. "The new move will not guarantee they will stay for the long term if they cannot see the merit of working here."

Japan's elder care centers are desperate to recruit staff and many are eagerly waiting for the new license holders to come in. "Fewer and fewer Japanese want to join because of the long hours and tough work. It is inevitable that we have to seek help from outside," Kiyoshi Takagi, an HR official at the Sawayakaen elder care center in Yokohama told the Nikkei Asian Review. The center has two licensed carers from Indonesia, who came to Japan under the EPA in 2008.

The Ministry of Health, Labor and Welfare estimates that Japan will need 2.53 million elder care workers by 2025, 1.5 times more than the current number. As the country continues to age, care institutions need to train, and more importantly retain, new staff. But instead of focusing on boosting head counts, the government must take the lead by improving the working environment.