Japan's famed hot springs called on to share the steam Open-air hot spring resorts are enjoying a resurgence of popularity in Japan but they might soon have to share their steam with electricity producers.   © Reuters
YUTA KOGA, Nikkei staff writerFebruary 18, 2018 11:30 JST | Japan
CopyCopied

TOKYO -- So far, Japan's geothermal power does little more than provide the water for the country's countless "onsen" hot springs.

But the nation sits atop a treasure trove of renewable geothermal energy that can provide much more than bathwater. And tapping it becomes more alluring every time security woes emerge.

This onsen envy dates back to at least the 1973 oil crisis, yet the highly reliable energy source that gives hot springs their steam remains largely undeveloped as a power source.

Geothermal power accounts for 0.3% of the electricity consumed in the country. The government wants to triple this to 1% by 2030 and is to start stepping toward this goal in fiscal 2018 by doing more geothermal surveys.

The surveys will begin while most of Japan's nuclear power plants remain dormant due to safety concerns sparked by the 2011 meltdowns in Fukushima Prefecture. 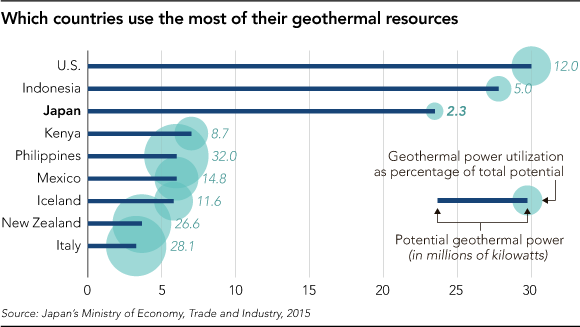 Think of geothermal power generation as the earth providing a boiler that produces steam that turns turbines.

Unlike solar and wind energy, power from geothermal sources does not drain away when the sun goes down or the wind stops blowing.

Because of this, geothermal plants have an 83% capacity factor. This is a measure of how much power a plant can actually produce were it able to run at full capacity over a certain period of time. Compare this to 12% for solar power plants and 20% for wind farms.

Once these efficient power generators get up and running, they can supply energy almost permanently.

Japan's geothermal resources are abundant. Only two other countries -- the U.S. and Indonesia -- have more. The country is sitting on 23.47 million kW of geothermal-sourced current but is only using about 530,000kW. 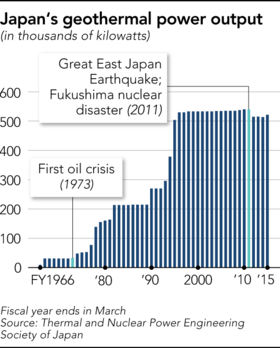 There are further ironies. Japanese companies -- Toshiba, Mitsubishi Heavy Industries and Fuji Electric among them -- dominate the global market for geothermal turbines. Their combined share is 70%. Yet their country lags the world in geothermal power generation.

A number of reasons account for this, one of which is all the years it takes for a geothermal power plant to start generating electricity. Each project begins with a search for one of those boilers that the earth provides for free. It has to be a particularly productive boiler. Looking for one can be like going on a treasure hunt; no one knows where the cache is buried.

A solar plant can go up in a year. A biomass project takes five, and a wind farm needs eight years before it can start feeding the grid.

Here is another problem: 80% of those prospective boilers are in national and quasi-national parks, where digging and constructing new buildings is illegal, in principle.

Another main obstacle is the onsen resorts, which are becoming increasingly popular among hordes of foreign and Japanese tourists alike.

In the Kagoshima Prefecture city of Ibusuki, one of Japan's most famous hot-spring areas, hoteliers are calling for a geothermal power generation project to be scrapped. They fear being left with little water for their tourist-luring baths. The FIT system has made it easier for geothermal power plant developers, who never have to worry about buying fuel, to see future profits.

But the installed capacity of geothermal power plants rose by only 3%, or 16,000kW, after the system debuted in 2012. During the same period, the nation's solar power capacity soared almost sevenfold, by 33.5 million kW.

The government, which intends to triple geothermal power generation to around 1.5 million kW from current levels, intends to do more.

The Ministry of Economy, Trade and Industry will revise its relevant guidelines during fiscal 2018 to allow geothermal power developers to simultaneously move ahead with their written and actual environmental impact assessments.

METI hopes this will result in halving the amount of time these assessments need to two years. This geothermal power plant sits in the Oita Prefecture town of Kokonoe.

The ministry will also double the number of spots where it conducts environmental and resource surveys, then publicize promising geothermal power candidate locations.

These measures together with new boring technology could allow geothermal plants to be brought online in a decade, down from 14 years.

As for the development of geothermal resources inside national parks, regulations have been eased, except for "special protection areas," making it possible for around 70% of all resources in these parks to be tapped.

After that shock, the government introduced a system to support geothermal power generation in an attempt to reduce the country's heavy dependence on imported oil.

But it lost ground to nuclear because getting a geothermal power plant up and running takes considerable amounts of time and money. And when one does go online, its output -- several tens of thousands of kilowatts -- is much less that a single reactor's 1 million kW.

The government even excluded geothermal power from the 1997 "new energy law." But the FIT system for renewables covers geothermal. It has helped numerous geothermal plants with output capacities of 7,500kW or less to get underway. Environmental studies are not required for these relatively small plants.

Mitsubishi Materials and its partners plan to put into operation the Wasabisawa geothermal power plant in Akita Prefecture, perhaps during fiscal 2019. It will be Japan's first large-scale geothermal plant, with an output capacity of more than 10,000kW, in 23 years.