TOKYO -- Japanese hospital operators are increasingly exporting their services and facilities to emerging economies, helped in great part by the Japanese government's growth strategy and the general need for more health care around the world. 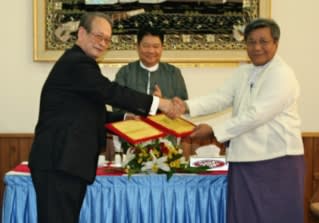 The Japan International Medical Cooperation Organization (Jimco), a nonprofit organization led by Fujita Health University, signed a memorandum of understanding with the health ministry of Myanmar on July 25 to establish medical facilities in Yangon, the nation's biggest city.

Jimco, based in Nagoya, will initially build emergency medical and comprehensive checkup facilities that will have made-in-Japan advanced medical equipment. Japanese doctors will be stationed there as instructors. Jimco is calling on Japanese entities, such as Toshiba and the Japan Research Institute, to help promote the project.

A health examination center equipped with a Japanese-made magnetic resonance imaging machine opened in Vladivostok in Russia's Far East in May 2013. With Hokuto Hospital in Obihiro, Hokkaido, as the principle manager, the facility offers cerebral and cardiac examinations aimed at disease prevention, an approach still rare in Russia.

About 6,000 people visited the center in the first year of service, 10% more than expected. "Next year, we'll build a facility to provide Japanese-style medical therapy programs to patients recovering from strokes and other ailments," said Hajime Kamada, head of Hokuto, which runs the Hospital.

According to Japan's Ministry of Economy, Trade and Industry, there are about 50 plans in the works to export hospitals to emerging economies. These include a cancer screening center in Kazakhstan, a diabetes clinic in Indonesia and a dialysis center in Saudi Arabia.

The world medical market has grown more than 8% annually over the past decade. As of 2010, it is estimated to be valued at 520 trillion yen ($4.94 trillion).

In Japan, medical expenses of nearly 40 trillion yen a year are considered a heavy burden on the economy. But Prime Minister Shinzo Abe and his government are trying to convert this drag on the economy into a growth engine by promoting hospital exports.

Postwar Japan has realized a high level of health care without imposing heavy public financial burdens by constantly keeping health programs up-to-date and introducing a universal health insurance system. But this favorable situation is being shaken by the rapid aging of the population. And this means countermeasures are essential.

Japan's medical presence in the world is limited because of the country's inward-looking nature. In 2012, for example, imports of medical equipment exceeded exports by 700 billion yen. To turn this around, exports of not only medical devices but also entire hospital systems, including technical instructions and management know-how, are heading overseas.

But as other countries seek to take advantage of the world's growing medical market, Japan's strategy has not necessarily been going as planned.

In March, Japan's Secom security service group and Toyota Tsusho trading house opened Sakra World Hospital in the Indian city of Bangalore to offer advanced Japanese medical treatment and services. But the hospital has almost no Japanese-made medical equipment. Most of the large equipment, such as computer tomography imaging and MRI machines and even beds, are from U.S. and European manufacturers.

General Electric of the U.S. and Siemens of Germany have maintained formidable positions in the global market for medical equipment. Japanese manufactures cannot compete on prices, said Tatsuro Fuse, the director in charge of Secom's medical business. Worried by endless price-cutting competition, Komaru shifted his company's strategy to thorough after-sale services, such as the quick dispatch of engineers to customers, even if these customers are far away, when a machine develops a glitch. As a result, users buy equipment from Yutani "even at somewhat higher prices," Komaru said.

The death rate of expected and nursing mothers as well as babies remains high in Myanmar due to the shortage of medical facilities. Volunteers therefore work to address the problems, such as married women visiting pregnant women in rural villages to give advice.

The program, promoted by married women, is modeled on a similar system in Wakayama Prefecture in central Japan. The advisory service was introduced in some parts of the country in 2005 by the Japanese Organization for International Cooperation in Family Planning, a nongovernmental organization based in Tokyo, and the Japan International Cooperation Agency. With this, the government of Myanmar has realized a nationwide network of services.

Trust in Japanese medical service programs should pave the way for business and other opportunities in emerging economies.