People walk in the Kenyan capital of Nairobi. The African Union is a $2.5 trillion economy that is continuing to grow. (Photo by Keiichiro Asahara)
SAKI HAYASHI, Nikkei staff writerMarch 7, 2019 13:01 JST | Japan
CopyCopied

TOKYO -- Japan will set up a permanent joint council between the government and private sectors to promote investment in Africa as it seeks to play catch-up with China, the U.S. and Europe in the increasingly promising region, government sources said on Thursday.

The launch of the joint council will coincide with the Seventh Tokyo International Conference on African Development, or TICAD7, scheduled for August, the sources said. The event, which will be held in Yokohama, just west of the capital, will bring together Japanese and African leaders.

According to the sources, the new body will involve Japanese companies operating in Africa and consider measures to boost Japanese investment in the region, such as investment pacts and preferential tax treatment.

Japan will also set up a new conference bringing together government officials and businesspeople from African countries as part of efforts to lure private-sector investment.

The 55-member African Union has a combined gross domestic product in the range of 250 trillion yen ($2.2 trillion) and had a population of 1.2 billion in 2015, a figure just below that of China and one that is expected to continue to grow. 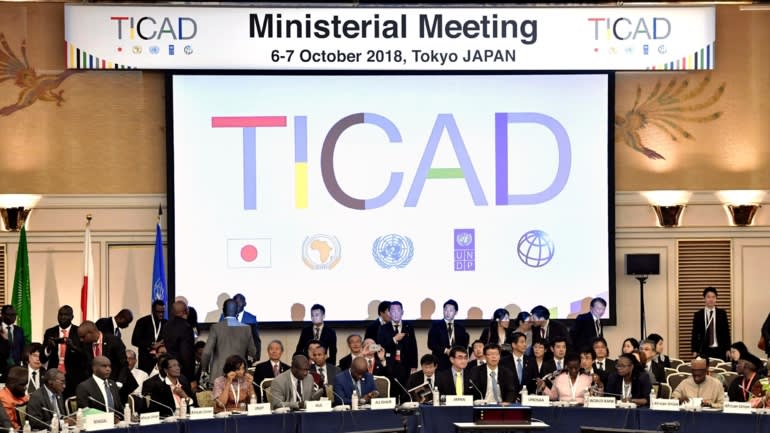 The Tokyo International Conference on African Development brings together Japanese and African leaders. This year's event is scheduled to be held in Yokohama, just west of the capital, in August.

The continent, dubbed the world's "last frontier," is rich in mineral resources like cobalt and platinum, as well as oil and natural gas.

Japan lags other major economies when it comes to investment in Africa. U.S. investment in the continent is seven times larger than that of Japan, while that of the U.K. and France is more than six times larger, according to data compiled by the U.N. Conference on Trade and Development in 2015.

The new permanent public-private council will be made up of officials from Japanese government ministries and agencies, economic organizations and small- and medium-size companies that have relations with Africa.

The council will meet two or three times a year, with the foreign minister, the economy, trade and industry minister and a business industry representative serving as joint chairpersons.

The launch of the new conference, tentatively called "B-TICAD," will also be held in August, and will focus on business challenges in Africa, as well as listen to views and requests from Japanese private companies regarding system reforms.

Currently, more than 440 Japanese companies, including all major general traders, do business in Africa. Engineering company JGC and other companies are building plants in Nigeria, while Mitsubishi Electric and chemical company AGC have opened sales offices in South Africa and Morocco to establish a foothold for tapping new markets. Japanese makers have also been active in buying African companies.

However, there are many institutional and environmental hurdles involved in investing in African markets. Domestic laws can be tricky, making procedures for issuing visas and customs complicated and obscure. Company representatives have demanded bilateral investment pacts, tax breaks and improved security.

The Japanese government, at the request of the private sector, will urge African countries to make it easier for companies to operate in the market.

Correction: This article has been amended to correct the combined gross domestic product of the African Union. The accurate figure is around 250 trillion yen.