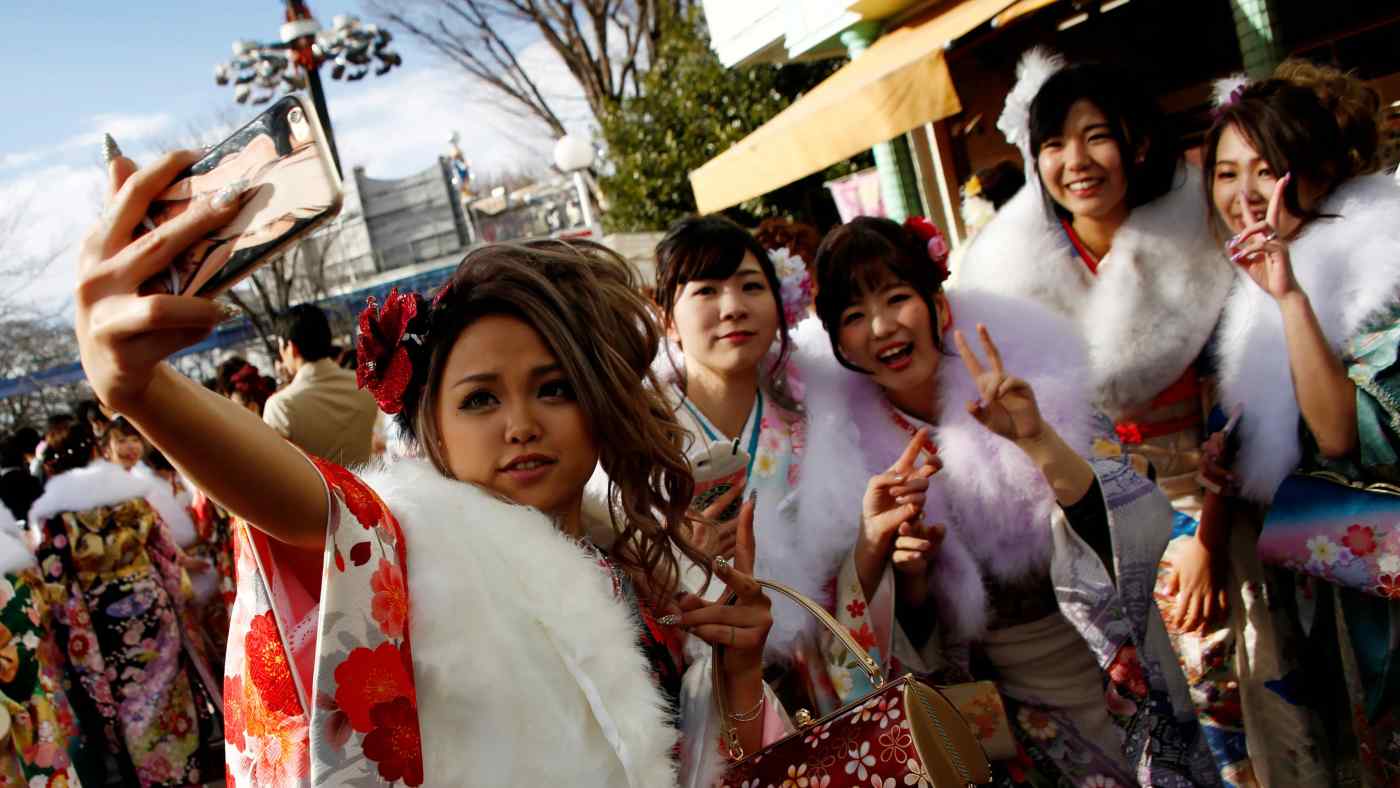 TOKYO -- For Japan's young people, among Asia's most cautious consumers for some years now, the pessimism that weighed on their spending is lifting in places as the country experiences its longest run of economic growth in decades.

In December, more than 600 young adults streamed into the Osaka branch of Kidzania, a theme park ordinarily reserved for children to dress up as firemen, doctors and chefs and test-drive future careers. This time, the unusual crowd was made up largely of millennials -- young Japanese in their twenties and early thirties -- who had paid about 5,000 yen ($45) for the chance to replay their childhood ambitions.

"I rediscovered the fun of work, enjoying myself there as an adult," said a woman in her 30s. A similar event at Kidzania's Tokyo location sold out in a matter of hours.

In August, a collaboration between Tokyo clothing brand and select shop Beams and Ziploc, the U.S. plastic storage brand, saw fragile-looking transparent bags, hats and umbrellas costing up to 14,040 yen snapped up by customers in their 20s and 30s, necessitating a restock the following week. Elsewhere, surveys show spending ticking up on expensive items like cars and overseas travel.

The spirited behavior is contrary to Japanese young adults' reputation for frugality, long a concern in a country straining to lock down future consumption in the face of a shrinking population. Entering their earning years against the backdrop of tepid economic growth, Japan's young people have come to be defined by coupon-hunting, home dining and a persistent focus on saving. 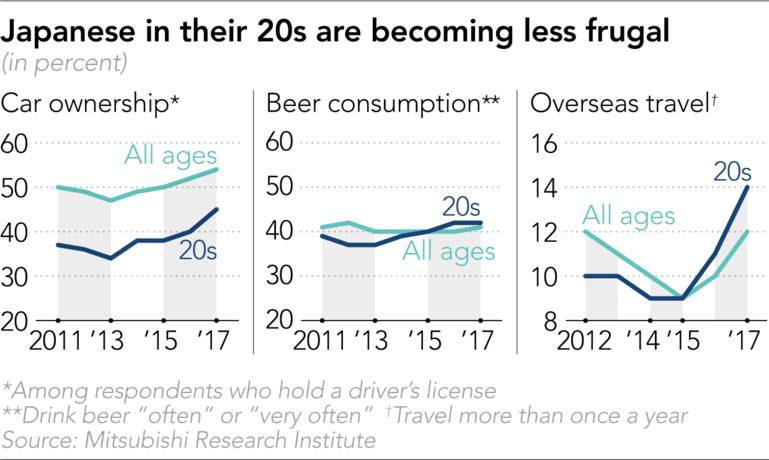 But as Japan recovers from its extended financial crisis, the country's millennials -- particularly those in their twenties -- are beginning to show some optimism. Hiroshi Ishida, professor of sociology at the University of Tokyo who runs a "life course" study tracking the lifestyles of young people, noted that those aged 20 to 34 call themselves "relatively content" with their lives.

Junichi Abe, chief producer at Mitsubishi Research Institute, attributes the shift to Prime Minister Shinzo Abe's economic policies, dubbed "Abenomics," aimed at expanding demand with bold quantitative easing and other measures. The beginning of the administration in 2012 "caused a sharp decline in unemployment risks," said MRI's Abe, who has run a study on youth spending patterns since 2011. "This led to a sense of better living from around 2015, resulting in signs of optimism for youth consumption."

MRI's latest survey shows car ownership rising, with 45% of people in their twenties owning cars in 2017. That is an 8 percentage point increase from 2011. Since 2016, leisure activities like beer-drinking and overseas traveling have jumped to outpace the country's average.

Another recent annual study from the Japan Tourism Bureau echoed MRI's findings. Nearly 25% of Japanese in their twenties traveled overseas in 2017 versus 19.8% two years before, a jump which saw them replace their elders as the market's main driver.

"Young Japanese raised in an era of low growth have been characterized as "in retreat" or "enlightened," with no desires and no need to consume," the report's authors observe. But especially among so-called "post-millennials," or young Japanese aged 18-22, they find a distinctly "outward-facing, positive mindset" compared to previous years. 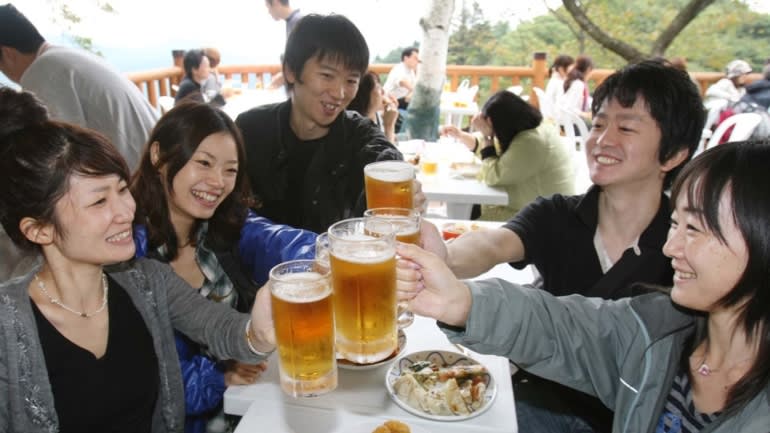 Japanese millennials are starting to spend more on dining out, travel and car ownership.

Japan's young adults came of age in the shadow of the 2008 global recession, on top of the long economic stagnation that followed the collapse of the country's bubble economy in the 1990s. Hit again by the Great East Japan Earthquake in 2011 while watching their government grapple with the world's fastest-aging population, the future financial burden dulled Japan's young adults' enthusiasm for spending.

Glimmers of enthusiastic consumption have also been attributed to the sense of a limited future. Shopping in Tokyo's Harajuku district, 23-year-old Maria Suzuki's latest purchase was an Apple watch. Her consumption is not exactly carefree: "I tend to spend money when I'm stressed," she said.

Under-30s account for less than a third of Japan's population, but their status as early adopters of new products means "their impact is greater than the absolute weighting," said Toshihiro Nagahama, executive chief economist at the Tokyo-based Dai-ichi Life Research Institute.

Products from the popular messaging app Line to the exploding popularity of tapioca bubble tea began as young people's trends before being taken up by Japanese consumers more widely. Longer-term, their choices to own houses, get married and have children will shape Japan's demographics, Nagahama added.

In the "lost generation" that preceded millennials, many failed to find a foothold in the workforce, entering at a time that coincided with the bubble's collapse and the financial crisis. Now in their mid-30s and 40s, they still cloud Japan's economic outlook, with many living with their parents on low earnings. A sense of economic security among Japan's rising number of moneyed families may also be playing a role. Nomura Research Institute analysts judge Japan to have the highest number of wealthy households in 18 years, boosted by Japan's rallying markets. "A strong sense of family ties makes these wealthy parents more likely to take out their children to department stores, dining out and travel," said Hiroyuki Miyamoto, chief consultant at Nomura Research Institute in Tokyo.

Japan's young people have not stopped exercising caution, though. Xiaoxiao Liu, a researcher at MRI, explains this as being careful with some expenses while allowing themselves free rein with others.

Ayame Kitazawa, 26, who works in the auto industry, said she buys her office wear from low-priced shops, but regularly treats herself to a cinema ticket with friends or by herself, which costs about 1,800 yen. In 2018, luxury cosmetics and phenomena like evening pool parties, dubbed "night pools," saw waves of popularity in Japan. In line with their international peers, smartphone access is making young Japanese well-informed and confident about the products they buy, while also making aesthetic standards -- such how a product looks on Instagram -- an important factor, analysts say. Young people tend to be less obsessed with brand names but will pay for functionality and value, unlike their parents, who came of age during the economic bubble of the late 1980s.

Spending recovered slightly among young households in 2017, increasing by 2.8% after contracting sharply by 10.4% the year before, according to latest annual government figures on average monthly expenses. Growth overall has headed choppily downward since a recent peak in 2008 for under-35s, the youngest category.

Tokyo University's Ishida noted that people tend to view the outlook for their personal futures as more positive than society as a whole.

For now, "young people feel the current state of things is slightly brighter," said MRI's Abe. "It's as if someone on a strict diet has undergone their physical exam and thought: now I'll treat myself to something sweet."