Decline in total numbers slowed only by influx of foreign residents Many part-timers at Ten Allied's restaurants are Vietnamese, a population the pub operator is increasingly courting with language and other types of support.
WATARU SUZUKI and MASAHARU TATENO, Nikkei staff writersApril 13, 2018 18:52 JSTUpdated on April 14, 2018 04:43 JST | Japan
CopyCopied

TOKYO -- Japan's population fell for the seventh straight year in 2017, with the native population dropping at a record pace, while the influx of foreign residents forestalled an even steeper decline.

The trend highlights a reality that few Japanese policymakers mention in public -- that foreigners are rapidly emerging as a key component of Japan's tight labor market.

The number of Japanese fell by 372,000 to 124.64 million as of October, according to data released Friday by the Ministry of Internal Affairs and Communications. The decline exceeded the 299,000 drop in 2016 and marked the fastest slide since the government began keeping records in 1950.

The drop was partly offset by an influx of foreign residents, whose number increased by 145,000 to 2.05 million as of October, as a serious labor shortage continued to push up demand for foreign workers. The figure has nearly doubled over the past 25 years, according to the Internal Affairs Ministry data.

Given Japan's low birthrate -- annual births in 2016 fell below 1 million for the first time since the government began collecting data in 1899 -- the decline in the native-born population is expected to accelerate. Japan's working age population is now only 60% of the total, down 10 percentage points from 1992. 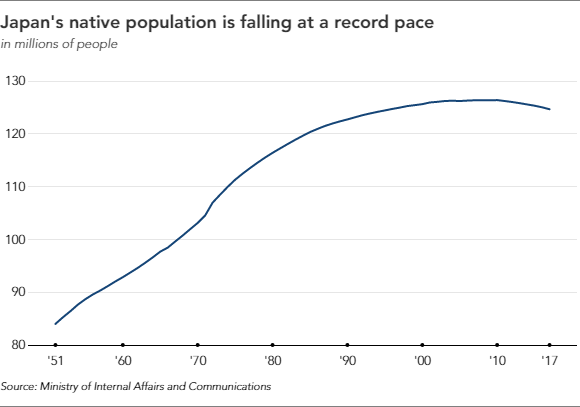 While immigration remains broadly unpopular in Japan, policymakers are gradually expanding foreign participation in the labor market. Nikkei recently reported that the government is mulling a plan to allow foreign trainees to remain in the country for an additional five years. The new residency status will be introduced as early as April 2019.

"Trainees with technical skills have become indispensable as the falling birthrate makes staff tough to secure," according to an official at Japan Marine United. The shipbuilder employs 400 trainees among its group-wide staff of 7,500.

Foreign workers are already a common sight at convenience stores and restaurants, creating local communities such as a "Nepal Town" in Tokyo's Shinjuku district. Ten Allied, operator of pub and restaurant chains, reckons that around 900 of its roughly 2,800 part-time workers are non-Japanese. About 70% of that group is Vietnamese. The company created Vietnamese training manuals to ease language barriers.

The number of foreigners working in Japan's construction sector more than tripled to over 40,000 in the five years beginning 2011, according to the land and transport ministry. That figure is set to keep rising for the time being as the looming 2020 Tokyo Olympics drives demand.

Japan is also working proactively to recruit highly skilled foreign professionals. The city of Tokyo and the Financial Services Agency last fall unveiled an English-language handbook on financial licensing procedures, including the type of permits available and the capitalization and employment conditions for various businesses.

Regions outside big cities, facing an alarming rate of population decline, are embracing foreigners as well. Nearly half of the 250 students at Keiwa Elementary School in the southwestern prefecture of Mie have at least one non-Japanese parent.

But many societal hurdles remain to be cleared. Foreign doctors, for example, are in principle only allowed to treat patients of their own nationality. Foreign-language support during emergencies is also an issue: When floods swept the city of Joso in Ibaraki Prefecture in 2015, efforts to contact and assist the roughly 5% of the city's population hailing from Brazil fell short.