TOKYO -- With a sharp rise in the number of overseas visitors to Japan, electronics retailer Laox is focusing on attracting customers from the rest of Asia. 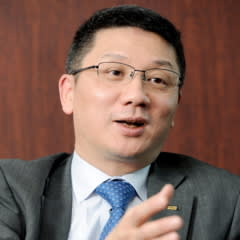 Laox now operates as a subsidiary of major Chinese retailer Suning Appliance. In a recent interview, Laox President Luo Yiwen spoke about the prospects for Japan becoming a tourism-oriented country, with long-term growth in visitor traffic.

Luo said Japan should be able to beat the government's target of 25 million arrivals in 2020, benefiting companies like Laox and the nation as a whole. But he also stressed that citizens need to be prepared for the influx, which is sure to change the complexion of society. Otherwise, a major boon for the economy could end up stirring public resentment.

Q: The number of foreign visitors to Japan topped the government's target of 10 million in 2013, according to the Japan National Tourism Organization. Do you think the country can keep it up?

A: Given that Japan had failed to achieve the 10 million target many times in the past, the 2013 result has symbolic significance. Japanese government efforts, including a special visa exemption for Thai (and Malaysian) tourists, were a contributing factor. But a weaker yen played the biggest role in boosting the total number of visitors.

Q: How about tourists from China?

A: While the annual number of tourists from Taiwan exceeded the 2 million threshold, the figure from China was 1.3 million -- low considering China's population. But as far as our company's stores are concerned, sales to Chinese customers grew threefold to fourfold during this year's Lunar New Year holiday period, which started at the end of January, compared with a year earlier. These sales at our main shops, including one in Tokyo's Akihabara district, rose sharply, even compared with the levels before territorial tensions flared between Japan and China.

Q: The tally may be relatively low, but there are signs Chinese tourism to Japan is recovering. Why?

A: Poor relations between Japan and China have become chronic. Many Chinese people probably have come to accept that reality and decided to separate themselves from politics. Japan has always been high on the list of countries Chinese people wish to visit. They are now probably releasing their pent-up wishes to see Japan.

Q: Do you see any changes in shopping trends among international tourists?

A: Asian tourists purchase mainly practical items for everyday life, such as watches, cosmetics and cooking utensils. That used to be the case with Chinese tourists, but recently they have come to buy folk crafts and souvenirs as well.

Q: How many tourists do you think Japan will be able to attract in the future?

A: Prices are low in Japan, the country is safe and the meals are delicious. It is also a convenient place for shopping. The government has set a target of boosting the annual number of international visitors to 25 million by 2020. Considering Japan's abundant tourism resources, I think the country will be able to attract even more.

As for Chinese tourists, there are still many first-time Japan travelers, so their destinations are mainly big cities such as Tokyo, Osaka and Nagoya. But some are visiting rural areas as well. A growing number of Chinese people are also traveling individually, rather than taking group tours. Even when they come in groups, more and more Chinese tourists are traveling freely once they arrive in Japan.

There is no doubt that the economic benefits of booming tourism will spread across the country.

Q: How can companies capitalize on the increased traffic?

A: What private companies have to do is simple. They must respond to visitors' needs. They will hire interpreters, put up signboards written in languages other than Japanese and offer more products suited to international customers' preferences.

Q: What obstacles must the government overcome?

A: Becoming a tourism-oriented country is not always a good thing. In Hong Kong, for example, prices have risen due to a flood of tourists from mainland China. As a result, there is growing resentment against them among local residents.

The Japanese government needs to tell the public what effects 25 million foreign visitors will have on society and consider how to respond. Given its economic power, Japan will be able to improve facilities, including transportation infrastructure. But what is most important is the mindset of the public.

Foreign nationals may buy up popular products and become the bulk of restaurant customers. If Japanese people are not mentally prepared for that scenario, they will feel stressed.

If the public can cope, though, the true internationalization of Japanese society will begin.