Employers stung by housewives opting to stay below tax ceilings TOKYO -- Many of Japan's retailers and restaurateurs are finding themselves caught between a rock and a hard place after raising wages, somewhat paradoxically, caused a shortage of part-time employees.

Much of the workforce in the retail and service sectors is made up of married women working part time. While many will have welcomed the increase in hourly rate, it has prompted lots of part-timers to reduce the number of hours they work lest they, or their spouses, end up having to forego certain tax benefits.

This has left a number of companies short-staffed and comes on top of pressure to curb excessive overtime hours under a government-led initiative to reform working practices. This means getting permanent employees to fill the gap is becoming increasingly difficult and some companies have been forced to change their operating hours.

"My hourly pay has gone up about 100 yen over the past two years," said a part-timer at a supermarket in Yokohama, south of Tokyo. "I used to work around 17 or 18 days a month, but these days it's more like 14." Now that she is on 980 yen an hour, the 55-year-old said she prefers not to work in the evenings, when the store is often short of hands.

But it is not the anti-social hours that are putting her off. She is just making sure her annual income does not exceed 1.06 million yen, otherwise she would have to participate in social insurance schemes that require contributions.

She is not alone at the supermarket. One colleague, she said, had put in too many hours in the first half of the year and had had to cut back from four to three days per week. The store is now only just managing to get by with temp workers, the woman said. According to statistics compiled by Japan's Health, Labor and Welfare Ministry, the average hourly wage for a part-timer in the wholesale and retail sectors has been around 1,000 yen since January, up 4% from two years ago. But so far this year, part-time employees have worked an average of 92 hours a month, down 3% over the same period.

On 1,000 yen per hour, someone working four days a week will comfortably earn over 1.03 million yen a year, another key income threshold. Earning more than that disqualifies the employee's spouse from a tax deduction on what they earn, affecting the overall income of the household.

The reluctance to exceed income thresholds has prompted a move to reward employees in other ways, in the hope that they will not cut their hours.

Leasing and financing company Orix is soliciting businesses to introduce an elective defined benefit retirement plan for part-time staff. The plan lets the employee choose to set aside part of their wages to a fund pool and receive benefits on retirement -- which have been topped up by contributions from the employer.

An Orix company spokesperson said inquiries have been flooding in. Coffee shop franchise chain Doutor Coffee introduced the plan in September and beer hall operator Kirin City is set to launch it soon.

While it is nothing new for part-timers to make sure their income stays below tax thresholds, this year's rise in hourly pay and efforts to curb overtime for permanent staff have put many companies in a tight spot. 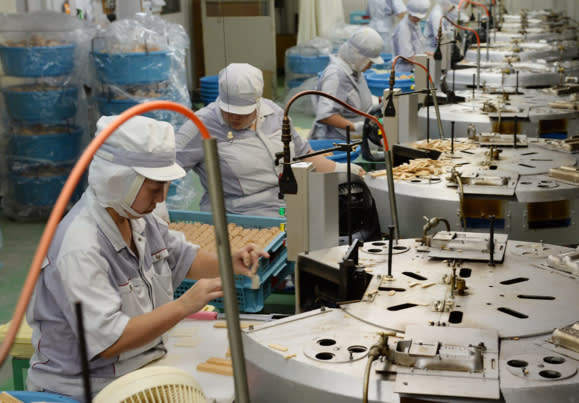 If part-time staff earn above a certain amount, their spouse loses certain tax breaks on their own income. (Photo by Makoto Kawakami)

An insider at a supermarket operator said the pressure to reform working hours has made it difficult for the company to maintain normal operations by relying on unofficial, unpaid overtime put in by permanent employees making up for the shortage of part-time staff.

Now many businesses that rely heavily on part-timers face a choice: accept the higher costs of securing enough staff or reduce operating hours.

Osaka-based supermarket operator Akashiya has chosen the latter. In late August, the company decided all seven of its outlets would close on Sundays -- they had been open seven days a week like most supermarkets beforehand.

In 2018, the government will raise the threshold for taxes related to spousal income to 1.5 million yen. But many companies that pay spousal benefits to their employees will likely continue to set their own threshold at 1.03 million yen or less, so the effect may well be muted.

The change would also not address the fact that many part-timers choose not to exceed the 1.06 million yen and 1.3 million yen limits -- for larger and smaller companies, respectively -- that would require them to pay social insurance contributions themselves.