Japan stocks likely to rise in April, but outlook murky

TOKYO -- Tokyo stocks have been seesawing recently amid thin trading, swayed by the yen-dollar rate. Although April will likely see shares move higher on fresh investment from institutional investors, further corrections may be in store if concerns over the strong yen linger. For the Nikkei Stock Average to rise significantly above 17,000, "analysts will have to stop downgrading earnings estimates," said Masahiro Suzuki, a senior quantitative analyst at Daiwa Securities.

Most institutional investors expect Japanese stocks to climb in April. Typically, the yen strengthens in March, as that is when many exporters exchange foreign currencies into yen. Once corporate books are closed, however, upward pressure on the Japanese currency wanes and institutional investors tend to pour new money into the stock market at the start of the new fiscal year.

Over the past 66 years, the Nikkei average has fluctuated an average of 1.48% in April, the second-largest amount after January's 2.38%. The average monthly change for April since 2000 is 1.06%.

The yen tends to weaken in April due in part to moves by domestic institutional investors to pump money into foreign bonds in the new fiscal year. Since 2000, the currency has weakened by an average of 0.46% in April. When the yen loses strength in April, listed companies that close their books in March tend to make more upbeat earnings forecasts for the new fiscal year because they adopt lower exchange rates. That, in turn, typically pushes up stock prices through May. 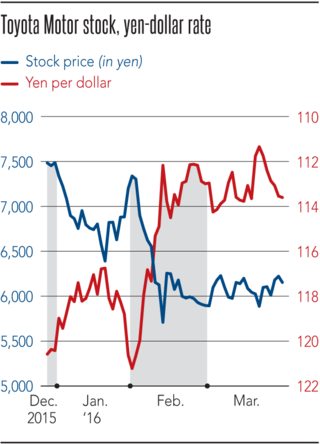 A weaker yen gives a direct boost to the stock price of Toyota Motor, a prototypical export-related stock. Toyota -- whose annual operating profit takes a roughly 40 billion yen ($355 million) hit for every 1 yen appreciation in the Japanese currency against the greenback -- set its exchange rate for the year through March at 115 yen against the dollar. The automaker's stock price tends to move above 7,000 yen if the yen weakens to the 120 range against the dollar, and fall below 6,000 yen if the currency nears 110 to the dollar.

That said, not all exporters get a stock boost from a weaker yen. For Sony, which procures many of its components in dollars, every 1 yen depreciation against the dollar depresses its operating profit by about 7 billion yen a year. A robust yen drove Sony shares down through February, as it did with Toyota shares, but Sony's share price later rebounded despite a stronger yen. If the yen weakens in the new fiscal year, Sony's stock price could start sliding.

Another reason stocks are likely to rally in April is that the government is expected to craft an economic stimulus package ahead of the upper house election in July. There have been media reports that the government will include gift certificates for daily necessities for low-income young people in its fiscal 2016 supplementary budget. In the fiscal 2015 extra budget, the government decided to give 30,000 yen in cash handouts to all low-income pensioners. It currently looks as though the groundwork is being laid for postponing the sales tax hike. Earlier in March, the government held a series of meetings with Japanese and foreign experts to hear their views on the state of the global economy. Two Nobel Prize-winning economists, Joseph Stiglitz and Paul Krugman, argued against a tax hike, citing the sluggish global economy.

Some market experts predict that in early June -- after the Group of Seven summit at Japan's Ise-Shima resort on May 26 and 27 -- Prime Minister Shinzo Abe will announce a delay in the sales tax hike based on the opinions expressed at the five meetings with the experts. He may even dissolve the lower house for a double election to gauge the public's response to his decision.

A postponement in the tax hike could send Japanese stocks higher, as investors may expect such a move to benefit the economy. Also, if the U.S. Federal Reserve raises interest rates either in April or June, the yen will likely depreciate against the dollar due to differences between U.S. and Japanese interest rates.

Not all of the scenarios are rosy, however. There are three potential problems. First, if the sales tax hike is simply delayed, consumers may still choose to keep their purse strings tight in the expectation that the tax will be raised sooner or later. For the economy to truly get a boost, the tax hike may need to be scrapped altogether.

Second, even if the tax hike is either delayed or called off, Japanese government bonds will likely be downgraded, and foreign banks will find it difficult to hold JGBs due to capital adequacy requirements.

Third, even if the government goes ahead with a double election, there is no guarantee that the ruling Liberal Democratic Party, its junior coalition partner Komeito and other parties seeking constitutional reform will secure more than two-thirds of the seats in the upper house.

In that case, the Abe government could face a situation in which personal spending does not pick up, JGB yields rise and discussion on constitutional revision stalls. Such a scenario could see stock prices falter due to selling by foreign investors disappointed about Abe's leadership.

Some market watchers are saying a delay in the sales tax hike has already been factored in. The government will likely have a hard time keeping investors upbeat about the stock outlook in the runup to the July election.