Just a third of the 26,000 foreign students who graduated from Japanese schools in fiscal year 2016 stayed in the country to work.
Nikkei staff writersApril 24, 2018 09:45 JST | Japan
CopyCopied

TOKYO -- Foreign students who hope to work or start a business in Japan after graduation are likely to receive help from the government in the form of expanded residency options.

Budding entrepreneurs currently cannot get resident status in Japan while in the preparatory stage of launching a business, except in certain special zones or with heavy documentation from their Japanese school. Now the government aims to change that.

The Ministry of Economy, Trade and Industry and other agencies hope to open the door to residency for such business builders as soon as this fall, aiming to keep skilled and creative foreigners in the country and boost Japan's competitive power in developing new technologies and industries.

Japan hosted 267,042 foreign students in fiscal 2017, according to the Japan Student Services Organization, a body under the Ministry of Education, Culture, Sports, Science and Technology -- up about 60% in the past half-decade.

But only a third stays in the country and work after graduation. Of the roughly 26,000 foreign students who graduated from university or graduate school in fiscal 2016, just 33% found work in the country thereafter. The government aims to boost the proportion to around half. 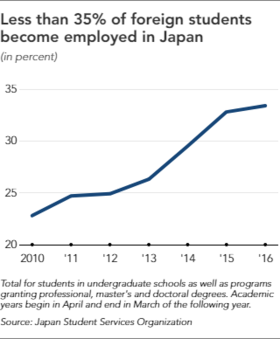 More than 60% of foreign students surveyed by Jasso wanted to find jobs in Japan, while about 10% hoped to launch a business.

But "it's difficult to simultaneously prepare for students' studies and entrepreneurship," said a source at a private university in Japan's southern island of Kyushu, citing fundraising as a hurdle.

Foreign graduates hoping to stay in Japan to prepare to launch a business must have extensive documentation, including a summary of relevant activities while in school, business plans, letters of recommendation from schools and proof of fundraising.

As a result, many students return home after graduation to get ready before applying for residency, or else find work with Japanese companies while preparing. Supporting foreign students' job-hunting efforts has been a challenging topic for many universities.

Rural areas also struggle with the tendency among foreign graduates of local universities to flock to major cities to seek work. More schools and municipalities probably will seek to partner in supporting foreign students' entrepreneurial ambitions in order to revitalize regional industry.

Certain strategic special zones in Japan, such as northern Kyushu's city of Fukuoka, let foreigners stay on visas while preparing to launch a business. Fukuoka has been offering more support for such entrepreneurs, and in the last few years has attracted about 40 from greater Asia, Europe, the U.S. and South and Central America.

The economy ministry and other government bodies aim to use the special-zone model to build a nationwide framework that would have municipalities apply for the right to take in aspiring business founders from abroad. The plan would also let foreigners on student visas who want to start a business transition to resident status to prepare.

The new system probably would also lengthen to one year the period special zones let foreigners stay during this preparatory stage. The present six-month period has been criticized as too short.