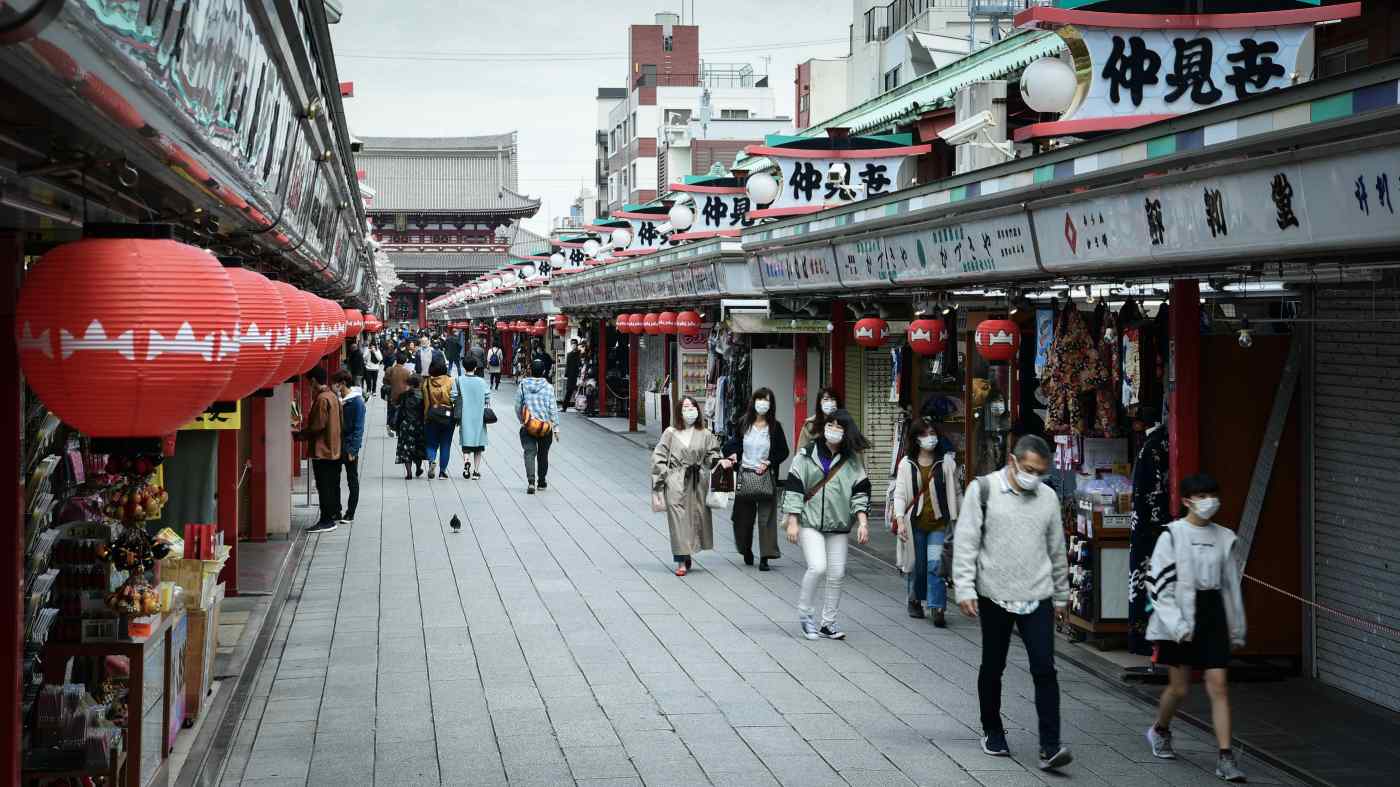 TOKYO -- Japan saw arrivals from overseas plunge 93% in March, a record year-on-year decline, as the novel coronavirus has kept travelers at home. Economists predict the number of foreign visitors to Japan will drop 30% to 80% for the full year, a serious setback for the government's hopes for tourism.

Its initial target was to draw 40 million visitors this year. Eased visa requirements and a big marketing push overseas have helped fuel a huge increase in overseas arrivals in the past decade. The tourism boom has been one of Prime Minister Shinzo Abe's biggest successes on the economic front.

But the coronavirus pandemic has turned the boom to bust. With the Tokyo Olympics postponed until next year, and travel bans in place around the world, 2020 is shaping up to be a gloomy year for tourism, dealing a blow to Japan's economy.

In March, 193,700 foreign visitors arrived in Japan. Those from China virtually stopped coming altogether: arrivals were down 98.5% from the same month a year ago. South Korean visitors fell nearly as steeply, by 97.1%, according to the Japan National Tourism Organization. The two countries made up around half of Japan's 31.88 million visitors in 2019.

According to the Japan Tourism Agency, foreign tourists' spending slid 41.6% from January to March, compared with the same period last year.

The sudden fall in overseas travelers is hitting tourist destinations hard, including Takayama, in Japan's central Gifu Prefecture. "It is unusually very quiet at this season," said Yoshiaki Komaya, secretary-general of the Hida-Takayama Tourism & Convention Bureau. The city, which had previously planned to hold its famous Takayama Festival on Tuesday and Wednesday, cancelled the event, which features food stalls and portable Shinto shrines carried through the streets. "We have seen only a few Japanese tourists, and hardly any foreign visitors since mid-February," Komaya said.

Takayama is the gateway to the Japan Alps, a popular area with hikers, and to UNESCO-listed Shirakawa-go, a village with well-preserved thatched-roof farmhouses. Takayama normally welcomes millions of tourists, attracting hotel operators to the area. Five or six new properties are scheduled to open by March 2021, Komaya said. Tokyo-based Tokyu Stay opened a hotel with more than 200 rooms on April 1, although it has been "greatly impacted by the coronavirus outbreak," according to a company representative.

"I don't think the city's accommodation will be oversupplied once the outbreak ends, but we don't know when that will happen," Komaya said.

The tourism industry is suffering the most from the downturn. According to Teikoku Databank, a credit research firm, there were 53 coronavirus-related bankruptcies in Japan through Monday, 21 of which were related to travel and tourism.

The sector has grown robustly in recent years, in contrast to many industries in Japan that have struggled to remain globally competitive. Last year, foreign visitors spent 4.8 trillion yen ($44 billion), a figure that has more than doubled over the last five years. The World Travel & Tourism Council estimates that Japan's travel and tourism sector accounts for 7% of its gross domestic product, up 1.6 percentage points from 2018.

Abe has made reviving rural economies a pillar of his economic program. The Japanese countryside is losing people, and tourism is seen as a rare opportunity for growth. The trends had been positive: "Until 2019, we were seeing tourists heading to rural areas of Japan rather than metropolitan cities," said Tatsunori Kuniyoshi, an analyst at Euromonitor International.

Estimates vary on how badly the coronavirus will hurt the tourism. Keiji Kanda, a senior economist at Daiwa Institute of Research, believes the number of foreign visitors in 2020 may fall to 7 million, down 80% from last year, if the disruption from the pandemic continues through the end of the year. Kanda estimates this will lead to a loss of 4 trillion yen in the economy. If the pandemic ends in June in major economies, the number of tourists visiting Japan will fall 30% from last year, he predicts. "The impact from the loss of foreign visitors is huge, looking at Japan's usual economic growth. It is unlikely that the pandemic will come to an end soon, or that the number of visitors will recover, as the outbreak is now happening in emerging countries," Kanda added.

Takuji Aida, chief economist at French bank Societe Generale, is less gloomy. Aida believes Japan will see 12.5 million foreign arrivals this year-- still a 60% decline -- if there is a recovery at the year-end. That would cut Japan's GDP growth by 0.6% in 2020.

"The coronavirus signaled the risk of depending on tourism. Reviving the rural economy could be done in a more balanced way," Aida said.

The government has approved a record 108 trillion yen stimulus package to cushion the blow from the epidemic. It will offer up to 2 million yen in benefits to small businesses. Once the outbreak is under control, the government plans to offer discount coupons for travel to bolster the tourism industry.

"It is difficult to know whether the scale of the package is appropriate," Daiwa's Kanda said. "If the outbreak continues, additional fiscal measures might become a crucial option."