TOKYO/GUANGZHOU -- "Goodbye, my beloved and precious mom. Life, work and everything is painful."

After sending this message to her mother, Matsuri Takahashi, then an employee at Dentsu, Japan's largest advertising agency, threw herself from a company dormitory in Tokyo on Dec. 25, 2015. Her suicide was later officially recognized as a case of karoshi -- death from overwork. Japan's karoshi law covers both suicides and deaths from illness caused by overwork.

Even though Dentsu had a labor-management agreement capping overtime at 70 hours per month, the 24-year-old Takahashi was putting in more than additional 100 hours.

She recorded painful days on Twitter: "Got very harsh words about a document I spent my day off working on. My heart and body are totally destroyed," she said in one tweet.

Dentsu's working culture is notoriously demanding. "We are a client-first company," a Dentsu employee in his 50s told the Nikkei Asian Review. He and his colleagues, he said, are expected to do whatever it takes to satisfy their clients. "I spent most of my time in the office or at a TV station. I didn't have much time to go home," he said, recalling his first days at Dentsu in the 1980s.

This intense corporate culture has helped Dentsu forge its extremely close connections with advertisers, the media and even the government. The company offers some of the highest salaries in Japan and attracts graduates from top universities. With some 7,000 employees across its various businesses, Dentsu wields massive influence in Japan.

But the advent of social media and internet ads has changed the advertising business drastically. The traditional marketing style -- a salesperson taking charge of specific corporate clients and securing ad space in newspapers and on TV for them -- is no longer the predominant one.

TV advertising, however, is still the company's bread and butter, accounting for 44% of unconsolidated sales in 2015. That is why "the logic for TV advertising is the prevailing logic at Dentsu," the employee in his 50s said. Managers who are not digitally savvy enough often give their subordinates unclear or inappropriate orders. For employees trying to meet their boss's expectations, overwork is often the only option.

After Takahashi's mother made her daughter's suicide public in October, Dentsu banned employees from working in the office after 10 p.m. But changing the company's deeply ingrained culture will not happen overnight. "Even if we're told not to work overtime, it's hard for us not to do so, considering our relationship with clients," another Dentsu employee said.

Though Takahashi's suicide -- and her pained messages on Twitter -- helped shine new light on the problem, the issue of karoshi is not a new one in Japan. 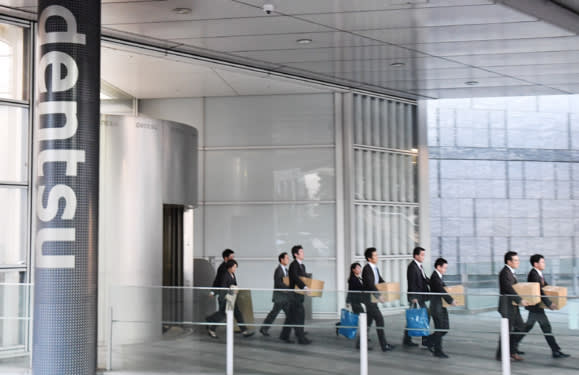 The Dentsu scandal continues to reverberate through corporate Japan. (Photo by Wataru Ito)

According to Japan's labor ministry, there were 96 deaths from illnesses officially recognized as overwork-related in the year through March 2016. During the same 12 months, 93 suicides or attempted suicides were recognized as being caused by overwork. The phenomenon has become so well-known internationally that the word "karoshi" has even entered English dictionaries.

Though the details may differ, other countries in Asia are also grappling with the issue of overwork. According to the latest data from the International Labor Organization, 32% of workers in South Korea worked 49 hours or more per week. The ratio was 30% in Hong Kong, 25% in Singapore, and 21% in Japan. These numbers stand in stark contrast to the West: the U.S. figure was 16%, and France 10%.

No ILO data was available for China, but overwork-related deaths have been reported there, too. One particularly tragic case came just 12 days before Takahashi killed herself.

On Dec. 13, 2015, Li Junming, an employee at top Chinese internet portal Tencent Holdings, died suddenly while taking a walk with his wife near their home. Li was a star employee, heading a development team in the company's game section even though he was still in his 30s.

Just a week before he died, he posted a heartwarming message online: "I will soon be a dad, and I hope our baby grows up healthy."

With a market capitalization 50 times bigger than it was 10 years ago, Tencent is known as the fastest-growing private company in China. The company, widely known for its massively popular WeChat app, boasts a market valuation of some $230 billion, surpassing even that of Toyota Motor, the world's biggest automaker.

Li was a central figure in Tencent's rapid growth. Convinced that he died from overwork, colleagues close to him collected signatures to demand that Tencent improve working conditions. The company should "think much of employees' mental care and allow them to leave office for home at 8 p.m. starting next year (2016)," their petition said.

Overwork seems to have been a serious and widely shared concern, given how many employees rushed to sign the petition before it was presented to the company's top management.

Deaths from excessive work have also occurred at other well-known Chinese companies and with increasing frequency.

Chinese media reported that an employee at Alibaba Group Holding died suddenly in spring 2014, just before she was due to give birth. The woman had recently become managing operator of the company's Tmall e-commerce site, six years after she joined Alibaba. People around her attributed her death to overwork.

The woman was reportedly so afraid of receiving a poor performance evaluation in the rapidly growing Tmall business that she skipped her required health checkup and continued to work at home even while on maternity leave.

The night before she died, she was up working until past midnight. At 4 a.m. the next morning, she suffered a seizure and was rushed to a hospital, but died of hemorrhaging outside the uterus.

Every year, some 600,000 people in China reportedly die from overwork, a statistic many experts attribute to the country's rapid economic expansion. Lu Shangbin, a professor at Wuhan University, says workers are under intense pressure from companies looking to maximize profits.

A 35-year-old car sales manager in Beijing experienced that pressure firsthand. "Every morning began with a fear of going to work," he said, recalling what his life was like last summer. "The day would end in a sleepless night and constant regret over transferring to sales department."

Months of heavy work, intense pressure and no help was enough to crush his ambition and his health. "Twenty days of no sleep and a few attempts at jumping from my 20th floor apartment convinced me to reach out to a doctor," he said.

In addition to company demands, however, professor Lu also points to another factor: workers' own desire to benefit from China's economic growth, which he says has been "too fast."

Lu described the situation as extremely dangerous, saying many people are sacrificing their health and happiness to get ahead in an increasingly competitive world.

China's labor laws stipulate that workers should work no more than eight hours a day and 44 hours a week. But the law has not kept up with the rapid expansion of the economy. Laws related to employment contracts and jobs are particularly prone to ambiguous interpretation. Some 3,000 labor disputes -- including demonstrations and strikes -- occur annually, and the trend shows few signs of abating.

Overwork is a pervasive problem across the region, but long hours are not making Asian countries more productive. According to data from the Organization for Economic Cooperation and Development, Japan and South Korea's gross domestic product per hour worked was $40.10 and $28.90, respectively, in 2012, far behind Norway, at $86.60, the U.S. at $64.10, and Germany's $58.30.

Roland Berger, the founder of the German consulting firm that bears his name, says Japan's service-sector productivity is relatively weak compared to its manufacturing productivity. "Japan definitely should be much more ambitious in applying and introducing digital technologies into the white collar functions," he told the Nikkei Asian Review during a visit to Tokyo.

Messenger pointed to the results of an empirical study covering 18 manufacturing industries in the U.S. The study found that a 10% increase in overtime resulted in a 2.4% decrease in productivity. A scholarly review of recent occupational safety and health literature, he added, showed that "long working hours are linked with increased risks of accidents and illnesses, which increases costs to businesses and to the economy as a whole."

Legal limits on overtime combined with "effective enforcement," including a robust labor inspection body and financial penalties, are needed to reduce working hours, Messenger said. Adequate wages are also a must. "Otherwise, workers will need to work as much overtime as possible just to make ends meet," he said.

Some people put in long hours because they enjoy their work, while others are motivated by money or the chance to get ahead. But unfettered overtime is an unsustainable practice, both for employees and, in the long run, for the economy.